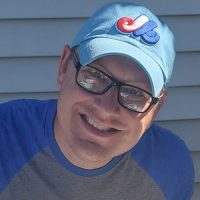 Joel Brigham writes Sci-Fi fairy tales and YA contemporary fiction, all of which are meant to be uplifting, hopeful, and fun. For 18 years, he has taught high school English in Central Illinois, and he has his master’s degree in Teaching & Learning from Illinois State University. He writes freelance SEO blogs for small businesses and was a senior writer for HOOPSWORLD and Basketball Insiders for 12 years, covering events ranging from the NBA Finals to NBA All-Star Weekend.

He is represented by Tina P. Schwartz of The Purcell Agency, where he also serves as an intern, and he is a member of the Penguin Random House High School Advisory Board. He still collects Teenage Mutant Ninja Turtles, takes his best naps with a baseball game on in the background, and spends more time with his fantasy football teams than his (perfect and wholly understanding) wife would prefer.

<Title> [According to the doc title, your book is called XXXX (which I LOVE), so go ahead and drop that sucker into this opening paragraph, too!] is an adventurous Contemporary YA novel that combines grief, deep platonic bonds, and the joy of travel and experiencing other cultures with Amelia Earhart’s own story and the theories of her mysterious disappearance, complete at 60k words. [First off, I really like the idea of a fictionalization of teenage Amelia Earhart! That said, I’d just dig right into what the story is about rather than telling the agent what themes the book touches on. What will catch an agent’s eye is a story hook that makes them go, “Holy crap, this sounds awesome!” They can figure the themes out for themselves if/when they read it.]

Everyone grieves differently. Her best friend moved on. Her dad got a new girlfriend. [Who is the “her” we’re talking about here? Is it a generic “her” rather than Amelia?] But seventeen-year-old Dia still wanted answers to her mom’s disappearance, who had gone missing while retracing Amelia Earhart’s historic flight. [Okay, this sounds legitimately awesome, but it’s buried at the bottom of your second paragraph. This should be the first line of your query. Lead with it! Plus, early on, I was led to believe that this would be about Amelia Earhart, but it’s really focusing on a girl named Dia. That wasn’t clear the way this is currently written, so go ahead and start with Dia’s problem and build the rest of the query from there.]

When the search is officially called off and her mother is declared dead, Dia finally snaps. [Be specific… snaps how?] With the little plane that her mother gave her, her best friend as her navigator, and a desperate desire for the truth, she turns the last summer vacation before senior year into her own high flying adventure around the world, following Amelia Earhart’s legacy to find out what happened to both women, and learning how to appreciate the life, friends, and love she still has along the way. [Gosh, I love a good adventure book, and this story sounds like it’s got a lot of fun, enriching, and beautiful stuff inside of it. I think you could tighten this paragraph up a bit. Try to express: 1.) What Dia wants, 2.) What’s standing in the way of her getting it, and 3.) What happens if she doesn’t get it. This paragraph really could be that simple and still pack a huge punch as agents read it.]

I am a motorcycle racer, my own personal mechanic, a scuba diver, a seasoned traveler, and an internationally published journalist with numerous articles across Mexico News Daily, Bonnier’s Motorcyclist Magazine, and Revzilla. Additionally, my memoir series Chronicles of a Motorcycle Gypsy has been featured on ESPN, with strong reviews and a regular place on Amazon’s Best Seller List. On the fiction side, I have several LGBT+ novels currently under contract with Ninestar Press under the Pen Name Anni Lee (I Do (Not) and Fighting Chance- Out now, Second Chance and Devil in the Details pending release). [This is quite a resume! Your bio paragraph looks great! One note: put your book titles in italics.]

“Women must try to do things as men have tried. When they fail, their failure must be but a challenge to others.”~ Amelia Earhart

I stood in the field, keeping my eyes wide open even through the hard gust that followed take-off. Mom’s aerobatic stunt plane shot through the air with masterful finesse. [I like this second sentence as a lead more than I do the first sentence. Try opening it here instead and see how you like it!] She was the main attraction at the Long Beach Airshow this year, and she deserved it. My mom is the best there is.

The loops and low altitude flybys were [most YA contemp is written in present tense rather than past tense. I’m obviously not reading the whole book to get a sense of how I feel about your choice to go past tense, but I thought it worth mentioning, anyway. Just something to consider during revisions! Maybe you could try a chapter in present and see how you like it? I feel like present tense in YA keeps young readers more engaged and creates more suspense.] always crowd pleasers. So were the quick soaring barrel rolls. Her wings sliced through the wind with unwavering force, letting neither fear nor the forces of gravity have any power over her.

Then her plane shot straight up, climbing into the atmosphere like a rocket ship. The crowd gasped in unison as the sound of the engine ceased. The plane stalled. The little aircraft spiraled toward the ground in twirling free fall.

The audience was on edge, but I wasn’t. [Your writing voice here is dope. I’m already engaged just a few paragraphs in. Nice job!]

One hundred yards from certain doom, the plane came to life, taking back control of the airways. The only thing louder than her 300 horsepower engine was the applause that took the field. The “falling leaf.” A classic.

As her performance concluded, I ran to the hangars to wait for her return.

“Little Dia Luna! How did you like the show?” Mario, mom’s stunt coach and my flight teacher, greeted me at the entrance.

“I’m fifteen! I’m not little anymore!” I puffed up my cheeks. [The only thing I’m missing from this opening page is any sense of what Dia’s conflict may be. On page one, you want to give at least a hint of that. This isn’t a story about Dia’s mom, but rather a story about Dia. So give me a better sense of her!]

Thanks for sharing this with me! It’s hard to read only one page and make sweeping judgments about a book, but you’ve got a cool concept here. What seems to be missing in both your query and your opening is stakes. Make sure there’s something for Dia to gain and something to lose. You may have that in spades throughout your manuscript, but I thought I’d mention it just in case. Best of luck in PitchWars!

Thank you, Joel, for the critique! We are showcasing three mentor critiques each day leading up to the Pitch Wars 2021 submission window, so make sure to read the other two critiques for today and come back tomorrow for more.