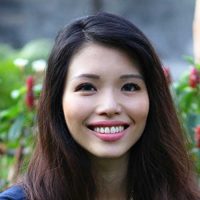 Jesse grew up going back and forth from Indonesia and Singapore. She has a BA in English Lit from Berkeley and a Masters in Creative Writing from Oxford, although she still has yet to find a way of saying that without sounding really obnoxious. Her debut novel, THE OBSESSION, will be out in Spring 2021 from Sourcebooks. It follows the classic love story of boy meets girl, boy stalks girl, girl gets revenge.

Here’s something about Jesse’s upcoming release, THE OBSESSION:

Nobody knows Delilah like Logan does. Nobody. And Logan knows this for a fact, because he spends all of his free time looking through her social media profiles and watching her through her window. Some might call him a stalker. Logan prefers to be called “romantic”. They’re meant to be together; he just needs to wait for the perfect moment to sweep her off her feet.

Except, during one of his watching—okay, spying—sessions, he witnesses Delilah killing her abusive stepfather. His sweet, perfect Delilah isn’t so perfect after all.

But that’s okay, Logan’s not unrealistic. Everybody has flaws. And as long as Delilah understands that they’re meant to be, everything will be okay. Everything will be totally and utterly perfect. And if she doesn’t, well…

Nothing that’s worthwhile is ever easy, right?

On the eve of the Prophet’s grandson’s murder [I’m not a fan of the double apostrophes. Maybe rephrase to: The night before the Prophet’s grandson was murdered?], Yassir Al-Azzawi sits on the curb of the empty schoolyard, counting down the minutes it would take for his father to arrive. [I would take out “it would take”. It’s just making the sentence all saggy for no reason.] It was hazy this time of year and Yassir wonders if his dad would ever see him through the smoggy air, especially with his failing eyesight. [This sentence is coming off a bit info-dumpy. I think we need a bit more voice to show us Yassir’s personality.] Yassir shivers in his lumpy yellow Chapman High hoodie that did not belong to him, but that he wore whenever the temperatures decided to drop drastically, like it had today, when his breath became visible in the air, pushing out of his clenched teeth like a suspended rain cloud nearing a storm. [Whoa, this sentence is a mouthful. There’s a lot of explaining here that’s really excessive. Trust your reader. For example, if you’re going to show us his breath becoming visible in the air, we don’t need to be told that the temperature has dropped drastically. So this sentence could be shortened to: “Yassir shivers in his lumpy yellow Chapman High hoodie. It’s not his, but man, is he ever grateful that he decided to wear it today. His breath is visible in the air, pushing out of his clenched teeth like a suspended rain cloud.” Don’t be afraid to show more of Yassir’s personality!] He hugs himself, squaring his arms elbow to elbow, and hoped [Watch your tenses. You’re switching back and forth between present and past.] that by the time his father arrived, his breath would not smell so much like the murky beer he drank over lunch. There weren’t many days left to prove to his father that he could be a good son, maybe even a decent Muslim, and after twenty years of driving a taxicab, his father detected the smell of alcohol as if he instinctively were built with the same technology of a breathalyzer. [The material here is awesome and RIPE for voice. It feels like you’re holding back a little. Don’t do that. Let go and trust in yourself to bring out Yassir’s voice. For example, you could write it like… “He runs his tongue over his teeth and winces when he catches the remaining sour stench of the beer he’d drank with the guys at lunch. Time’s running out, and he needs to prove to father that he’s a good son, a decent Muslim. Thing is, after twenty tears as a cab driver, father’s sense of smell borders on superhuman. He’s basically a human breathalyzer.” Obviously this is more in my voice, but I hope you get the gist of what I’m trying to say.]

“Come on, come on,” Yassir whispers through chattering teeth.

Eventually, the familiar yellow taxicab light drifted above the fog, and as he suspected, his father almost drives past without seeing him. [Aww, this is such a great little detail that makes me immediately want to hug his dad.] Yassir throws his backpack over his shoulder, and when he opens the door to the passenger seat he finds his father leaving his own.

“My eyes are tired,” his father explains, his tone too quiet for Yassir to detect anger, annoyance or pity, which tend to be the first three feelings his father possessed whenever they spoke lately. [Great! Love this layer to their relationship. I immediately feel the complexity of their relationship and I’m hooked.]

“You drive.” [Is this still the dad talking? If so, I think it should be with the previous paragraph.]

[Overall, this is a solid first page. I like how complicated the father-son relationship is and I can’t wait to see how the story unfolds. My major comment would be to trust yourself and your reader. Don’t feel like you need to explain everything. Give us enough to set the scene and create the mood, but don’t spoon feed us every detail. Also, I feel like Yassir’s voice isn’t quite coming through enough yet, but it’s close! Great work!]

Thank you, Jesse, for the critique! We are showcasing three mentor critiques each day leading up to the Pitch Wars 2019 submission window, so make sure to read the other two critiques for today and come back tomorrow for more.