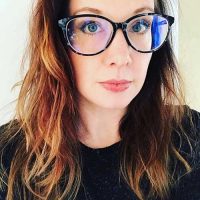 Emily K. Thiede writes speculative fiction about characters who flirt with their enemies and find humor even in the darkest situations. An alumna of both the PitchWars and the Author Mentor Match programs, Emily teaches aspiring writers and hosts monthly social events through a local writing nonprofit, and she is an active member of the YA community. When she isn’t writing, she fosters kittens with an animal rescue organization and spends way too much time on twitter. Her debut YA Fantasy, THE LAST FINESTRA, is scheduled to launch in 2022 and is the first of a planned duology from Wednesday Books/MacMillan.

A witch in training was what you could call her, who had her powers released onto her when she became a witch. No control over her powers, most she isn’t even aware of, and Murdock, evil of the evilest, still trying to steal her power from her.  [Since agents skim queries so fast, clarity is key! It helps to remember that queries aren’t the best place to show off fancy writing, but rather an opportunity for a quick, streamlined pitch to catch an agent’s interest. With that in mind, this sentence structure is a bit complicated and passive, so I’d work on phrasing these lines to put the main character front and center: “Lily’s been a witch in training since she gained her powers ….”]

When Kevin, her trainer/Guardian/boyfriend introduces her to Charlotte, the prettiest, most talented witch ever, the trouble begins. Charlotte turns everyone against Lily, and Lily is left alone to save her best friend from Murdock and his followers, and to make everything worse, she realizes she needs Kevin to rescue her father, who Lily has found out since becoming a witch has been trapped and tortured by an organization wanting his powers for the past eight years. [You’ve presented her obstacles clearly and concisely, but I want to know more about her dad being trapped-that’s intense! To maximize the impact of that problem, you could combine these 3 paragraphs into 2 and use the third to accentuate the biggest problems and the possible consequences if Lily fails. I’d also suggest reworking the last part to show how Lily tackles the biggest challenges, rather than focusing on Kevin. It’s Lily’s story, after all, and you want to highlight how she drives the plot and has agency, rather than suggesting the big climactic rescue may rest on another character’s actions, not hers.

Paragraph 1. Intro: Fifteen-year-old Lily has to save her best friend/she’s a witch in training with no control, etc.

Paragraph 3. Up the stakes, lay out the possible consequences if Lily doesn’t succeed: Lily’s best friend is in trouble and her dad is trapped by the Big Bad, so, with Kevin’s help, Lily must figure out how to rescue her dad and save her friend, or else …. (TERRIBLE POSSIBLE CONSEQUENCES GO HERE)]

TITLE is the second book of the trilogy, a paranormal with a touch of first love romance [ “complete at” and you can cut “almost”] at almost 50000 words. [Agents generally prefer to offer on first books rather than sequels, so you may want to consider whether you can query this is a standalone with series potential, or, since 50,000 words is short for YA Fantasy, if the first book and this one could be combined.]

[Don’t forget a personal bio, even if it’s just something like “I’m a part-time waitress who loves hiking with my dog!” Agents want to get a glimpse of who you are as a the person, because they aren’t just looking for a book they like, but a client they’d like to work with!]

Thank you for taking the time to read this query. [Feel free to jazz this up a bit with a “Thank you for your time and consideration” and/or some form of personalization, like “I saw that you recently sold [name of book that sounds cool] and it sounds great. Congratulations!”]

Lily woke, rested and content, grabbed her clothes and nabbed the bathroom. Life was good. No, better than good. It was perfect. [It’s fairly common for authors to start with a main character waking up which means agents see this a lot. To make your story stand out in a crowded market, it’s worth considering whether there may be a different opening scene that would differentiate your story more from the rest of the pack.]

She was a witch.

She was. A witch. With powers. [Nice use of voice here. Her excitement and amazement really comes through.]

Okay, a witch in training. And [she] didn’t know yet what all of her powers would grow to be. But she had years to learn. The rest of her life. At fifteen years old, that was a long, long time. Eons even. [SO true for a 15-year-old’s perspective!]

Abby, her best friend, wasn’t a witch. No witch blood in her at all. That sucked, but Abby was still the best friend a girl could have.

Lily was taking a break from training today. Not that she wanted one, but Kevin, her Guardian and trainer, told her she had to. Lily could spend forever using her powers and never get tired of it. Maybe it was Kevin getting tired, [I’d italicize the previous thought in this circumstance, since it’s followed by “Lily thought.”] Lily thought to herself as she rinsed the shampoo from her hair.

He did have other witches to watch over, not just her. And sometimes, Lily thought, cringing, she could be a bit demanding of his time.

Dressed, teeth brushed, and wondering what to do with an entire Saturday, Lily headed to the kitchen for breakfast. She’d settled at the table, ready to enjoy the first bite of her chocolate chip waffle, when Paige, her annoying younger sister, walked into the room.

“What are you eating?” Paige demanded.

“Can you make me one?” Paige dragged a chair away from the table. The chair scraped across the tile floor as she pulled closer to the table, the screeching noise like a hammer pounding into Lily’s head.

“Keep it down,” she muttered. “It would be nice to let Mom sleep in. She’s worked every Saturday for months.”

[Overall, you start the story with a compelling hook (she’s a witch!), a character who’s voice shines through, both via internals and dialogue, and you set the scene for readers in a way that is clear and not confusing. To make the opening pop a bit more, you might want to skip the morning wake-up routing, and start at the kitchen table or another setting, while having Lily still convey the same excited thoughts about being a witch, etc. That bit of intrigue is effective for catching a reader’s attention, but you’ll want to give them more hints soon that fun things are on the horizon, and sometimes, a waking up scene conveys the opposite impression, making readers think they’ll have to wait for a bunch of “normal life” moments before the story kicks in. This is why opening chapters are, in my opinion, the hardest part! They have so much to accomplish—introducing the character and their normal life, worldbuilding, hinting at tension/conflict to come, etc—so you really want to make every line count. You could probably save some of the off-page character info for a bit later, too (like her best friend not being a witch, etc) and present it when those characters appear on the page, as a way to keep the main character moving forward through this oh-so-important opening chapter.

Thanks so much for sharing your work, and for letting us use it to help other writers develop their craft, too! Having the courage to share your work for critique is truly one of the toughest parts of this profession, so you’re already ahead of the game!

Thank you, Emily, for the critique! We are showcasing three mentor critiques each day leading up to the Pitch Wars 2020 submission window, so make sure to read the other two critiques for today and come back tomorrow for more.