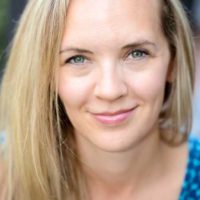 Annette Christie is a Canadian-American hybrid with a BFA in Theatre and a history of very odd jobs. She writes YA contemporary and Women’s Fiction novels and has published articles with HelloGiggles. She’s represented by Jess Dallow of Brower Literary Management and is currently working with the fabulous Alloy Entertainment. Annette resides in Canada with her husband and two children. The back of her head is featured prominently in the film Mean Girls.

It’s impossible to walk gracefully in the forest, Hervana would say, but a well executed dive would always impress. (I’d really love to see a strong opening line that features your MC more prominently. I like this line, I’d just move it down. It would be great after ‘Jump, it whispered.’)

Luren Wake curled her toes around the cool edge of the rock face. One hundred feet below lay the warm blue ocean, turned black beneath the full moon. The calm waves sparkled beneath the glowing orb, the scent of orange blossoms and sea lavender floated around her. Lurens (Luren’s) heart raced as the warm breeze tossed her hair, tugging at her. Jump, it whispered. (This paragraph is gorgeous. I love the imagery and the personification of the wind.)

Luren had no reason to be nervous, this was a dive she’d done a thousand times before. This is what Grand Matri Hervana had spent fifteen years training her for. But it was her first solo dive, her first dive without Hervanas calm, unyielding voice in her ears. Jump. (Great work creating atmosphere and tension!)

She reached down to graze the small blade tucked into her belt. It was the only tool she needed deep below the surface, that and her pouch to store the fibre she collected. A life for the gift, that was the trade. But she wasn’t ready. Hervana had only been gone a few months, it was too soon. (You’re dangling bits of information here without giving away too much, creating mystery and making me want to read on.)

She’d had her first dream last week, obscure and fragmented. The whole picture played out over months, so she was told by Hervana. Only then would she have dived enough and collected enough fibre to weave the tapestry, and only then would she know who was to receive the gift. The only thing Luren knew for sure was what Hervana told her. When the dreams come, you must jump, and you must be ready to kill. (Amazing. Love the juxtaposition of the calm beauty we associate with weaving a tapestry and the idea she must be ready to kill.)

Any questions she had, fears or concerns over what she needed to do, were her own to muddle through. She was alone now. Luren spread her arms wide, letting the silver moonlight wash over her as she hands came together above her head, poised like an arrow.

Jump, it whispered. Luren tucked in her head, bent her knees and jumped.

Your writing is simply beautiful. I was immediately pulled into your story and was so upset when I realized I’d reached the end! I think these are really strong opening pages. I would encourage you to move that very first line one paragraph down and to try to find a first line that features Luren more prominently. Killer first lines tend to win over mentors and readers alike. I would also suggest you sprinkle a bit more world-building into these opening pages. Is Luren human? Does she live in the forest? Are there any other people or creatures around to witness her jump?

Again, your writing is beautiful. My biggest complaint is that I wish I had more pages to read 🙂
Best of luck! I love what I read here!

Thank you, Annette, for your critique! 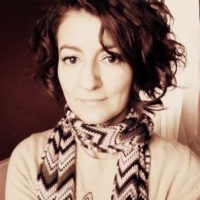 Carolyne Topdjian is a writer of noir suspense and gothic tales with recent publications in PRISM International and Firewords Quarterly. She studied creative writing at the Humber School for Writers and obtained a PhD in Social and Political Thought from York University. When not reading or storytelling, Topdjian teaches in the School of Media Studies at Humber College, Toronto.

Arkansas was just a stop on the road for Dwyn, a fire-breathing elemental dwarf living like a vagrant in the Southern US. But when sickness forces him to trespass at the lonely mountain of Ironsfork, he winds up a prisoner of the most vindictive necromancer he’s ever met, in the worse magical trouble he’s ever been in.

Dwyn knows trouble. He accidentally killed a necromancer nine years ago, and was branded an out-of-control Dragon for his crime. Once, elemental dwarfs were the keystone of the Southern ecology of magic. But in the present-day South, the dominant magic is necromancy, and the word Dragon has become a curse.

Dwyn is living that curse when Nyssa Irons, the necromancer of Ironsfork, sentences him to prison with a debt he can’t pay. She binds him to it with his own magic—a death sentence. His only hope of escape? Kill Nyssa.

Then Dwyn’s carefully orchestrated murder plot awakens the mountain itself, and he becomes the unwilling savior for old magic lost five centuries ago. Ironsfork will stop at nothing to resurrect the faith that bonded Dragon dwarfs and mountains, and it would kill Dwyn to keep him forever.

Trapped between the dangerous necromancer he is sworn to kill and the powerful mountain that would love him to death, Dwyn must face the unthinkable. To save his life, he’ll have to save Nyssa. But the price for her life is his Dragon soul.

IRONSFORK is adult epic fantasy set in an alternate history Southern US. Complete at 110,000 words, it combines religious themes like those in Songs of the Earth with a gritty, contemporary rural setting like The Hum and the Shiver. Thank you for your time and consideration.

Kudos Rebecca! There’s a lot of good things brewing in this query. One of its strengths is its economy of words, paired with an interesting concept. Because world-building and context is often essential for understanding plot in fantasy, some SFF writers have the urge to provide too much information in their query letter, including unnecessary backstory. So you have a nice sprinkle at the start, providing just enough to set-up the reader with the context of this world without falling prey to over-description. Having said that, you do have a little wiggle room towards the latter half of your pitch for additional details that will help clarify and strengthen your stakes and conflict.

The first question I have is what does Dwyn want (before he’s trapped/inciting incident)? Is it to redeem his reputation? Be able to practice magic? Find another dwarf, etc.? If he’s an underdog, is there a way you can highlight that more? A unique/sympathetic character can further work to hook readers. So, you do a good job telling us who Dwyn is on the outside, but who is he on the inside? How can a reader “care” and root for him in a few brief lines?

A small thing that tripped me at the start was the use of the terms dwarf and Dragon. I had to read this over twice. Though you mention Dwyn is fire-breathing from the outset, it might work to provide a bit more of a connection/reminder for this label (or type of creature) in the second paragraph, e.g:  He accidentally killed a necromancer with his fire-breathing nine years ago and, was branded an out-of-control Dragon dwarf for his crime. (or what have you; I’m sure you can make it sound less clunky ) Again, this is a minor suggestion. In general, your first three paragraphs are in good shape.

In the fourth and fifth paragraph, the plot gets a bit fuzzy at times. I’m going to get nitpicky to (hopefully) help you think which word choices and descriptions will best communicate your intended meaning: Ironsfork will stop at nothing to resurrect the faith that bonded Dragon dwarfs and mountains, and it would kill Dwyn to keep him forever. Some questions: Is Ironsfork a place or a people? Also, what is the faith that is being resurrected? Aren’t the necromancers in power and so their “faith” wouldn’t require resurrecting? Up until this point, the reader doesn’t know enough about this world to understand the bond of dwarfs and mountains; what is this bond, and why is keeping Dwyn forever relevant for Nyssa/her people vs. just killing him? Sprinkling a few more details may help clarify these forces working against Dwyn from reaching his goal.

In the final paragraph, I feel we’re missing some key point when you say:

and the powerful mountain that would love him to death. The term “love” threw me. Dwyn must face the unthinkable. To save his life, he’ll have to save Nyssa. But the price for her life is his Dragon soul. This is a bit vague. You might consider clarifying: why must Dwyn suddenly save Nyssa’s life? Don’t be afraid to get specific. Your protagonist’s contradictory needs and the bind he’s in are excellent—definitely keep that! However it needs more explanation so the reader can know—or better yet feel—what you, the writer, knows in order to make sense of the raised stakes and impossible choice your protagonist faces.

Your final paragraph with word count and comps is perfect; (nice title, by the way!). Some writers like to add a brief bio to give a sense of their personality/voice, or who they are as a writer; however this is optional, so you can certainly leave it as-is. Overall, you have a solid sense of how the query letter should flow. It’s just a matter of filling in some blanks re. character and plot. Good luck with Pitch Wars and I wish you all the best with querying this project!

Thank you, Carolyne, for your critique!