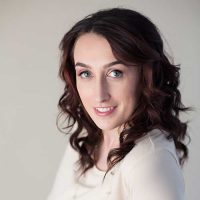 Dante Medema is an author of books for young readers. She lives in Anchorage, Alaska with her husband, four daughters, and room full of alien memorabilia—and books, of course. When she’s not writing, she dabbles in baking, decorating, painting, and reading up on enneagram personality types or playing with her boston terrier. Her debut novel, THE TRUTH PROJECT, is out on October 13th with Harper Collins / Quill Tree Books—about a girl who finds out via an online ancestry kit that she is the product of an affair. 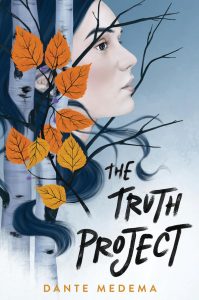 Seventeen-year-old Cordelia Koenig was sure of many things going into her last year of high school. For one, she wasn’t going to stress over the senior project all her peers were dreading—she’d just use the same find-your-roots genealogy idea that her older sister used for hers. Secondly, she’d put all that time spent not worrying about the project toward getting reacquainted with former best friend and longtime crush Kodiak Jones who, conveniently, gets assigned as Cordelia’s partner.

All she has to do is mail in her DNA sample, write about her ancestry results and breeze through the rest of senior year. Done, done and done.

But when Cordelia’s GeneQuest results reveal that her father is not the man she thought he was but a stranger who lives thousands of miles away, Cordelia realizes she isn’t sure of anything anymore—not the mother who lied, the life she was born into or the girl staring back at her in the mirror.

If your life began with a lie, how can you ever be sure of what’s true?

Add to Goodreads or Preorder today!

The verleth [should this be capitalized?], magical demons contrived of smoke and blood, have wreaked havoc in the land of Trynn for as long as history has been recorded. No one knows where they came from or how to eradicate them completely. The abjurers [does this need to be capitalized or italicized like the verleth?], those who possess controlled magic, are Trynn’s only defense, but only by those who can afford them. When the princess of Trynn is murdered one night by an all-powerful verleth, the king enacts a summons for all abjurers to go out and find it for a considerable reward. [I think you could likely weave this whole paragraph into the ones below. Your query letter should jump straight into the meat of the story—and what you have here are incredibly beautiful details—the worldbuilding sounds incredible, but the agent is going to want a taste of the action straight away.]

[I would start here.] Having just turned eighteen, impulsive and reckless Cressida wants nothing more than to leave her small village behind and set off on her own path, terrified at the prospect of being trapped there forever. [this opening sentence is a little long and could use some tightening. How about something like “Newly 18 year old Cressida yearns to leave her small village, terrified that she’ll end up trapped forever.” Also maybe include what she’s doing while she’s waiting? Is she a farmer, a baker, does she work in a field? In this paragraph you should tell us who this character is and what they’re afraid of losing. She is afraid of never leaving, but what is keeping her there. What is at stake if she leaves?]

[I would start off with this as the second paragraph. You can add the part from the first paragraph where you say the princess was murdered and the king has put out a summons. I love this detail and no doubt agents will be salivating when they get to this part!] When she hears of the summons, she sees this as her chance to escape her small village and find the adventure she’s been yearning for. The only obstacle in her way is convincing Jaromir, her longtime crush and family’s abjurer to come along. [Why does she want him to come along? Is Cressida also an abjurer or does she need him because that’s what he is? Is she one of those wealthy families that can afford the abjurers?]

[I think you can tighten this and the one above it and weave them together.] After a tragedy strikes their village, Cressida is stunned to find out she has magical abilities of her own. Forcing a reluctant Jaromir to aid her, they begin their hunt for the verleth, a feat deemed impossible by most.

On their precarious journey they encounter competing teams almost as vicious of the verleth themselves, and charming nobles with dangerous secrets who cause Cressida to question to what end would she go to prove her own power to herself, and what truly creates a monster. [I think this paragraph runs a bit too long and could use some tightening. The biggest thing I want to see in this query is more stakes. What happens if Cressida doesn’t leave? What happens if she doesn’t avenge the princess’s death? You want to leave agents chomping at the bit to get to the next part of the query letter just to find out that they are going to have to request your book to get the answers they desperately want!]

TITLE is a YA Fantasy complete at 90k words. [I’d take a second to tell the agent a little bit more about the book. What are the core themes in the story that will resonate with them?] Fans of A SORCERY OF THORNS and CROWN OF OBLIVION would enjoy the strong magical and romance elements of this work. [Don’t forget to personalize your query letter—you want to make sure the agent knows why you chose them and/or why you think this book might be a good addition to their list!]

Currently living in Richmond, Virginia, I am a member of the James River Writers group and have a bachelor’s in psychology from the State University of New York in Cortand.

[I usually put their submission guidelines here, letting them know I was paying attention to the guidelines on their website and as a reminder to myself of what to include before I sent it.]

The stench of death clung to the verleth wherever they roamed. [what an opening line!] Not roamed, infested—attacked. Elena [Is this the same person as Cressida in the query letter? If so, this might be confusing for agents as Elena wasn’t mentioned in the query letter at all. Is she a pivotal character?] struggled to breathe from her mouth instead of her nose while still keeping her breaths hushed. Her knees cramped while she huddled in her armoire, her palms slick with sweat. Stories about monsters made from shadow and blood raced through her head. They were something not of this world. Something of magic.[Not going to lie. I want to know what happens next and my heart is racing.]

No one was coming to help her. [This feels slightly passive after the first paragraph. Keep us invested. “No one could help her.”] The guards were dead. The servants were dead. Their blood pooled under her door following the sounds of the monsters ripping out their throats. Sharp screams, and then nothing. Nothing but a thud and the dark liquid leaking in. [I’d combine these last two sentences.] In a flash she had [omit ‘had’] leapt from her bed and into the armoire she often hid in as a child. [the reader already know she was in the armoire. Maybe omit the part where she ran to the armoire, but have her struggling with those long legs to fit still.] Now, nearly eighteen with legs longer than her tailor preferred, she didn’t fit as well.

How did they get in? Father’s wall is supposed to be impenetrable.

Her stomach knotted as she wondered if her father was still alive. The king’s quarters were set back a distance from the main palace, maybe the verleth didn’t make it that far yet. Maybe he escaped in time.

Elena strained her ears to hear past the thick wooden doors of her armoire, and the even thicker door of her room. Blood rushed in her ears, making it difficult to hear the sounds outside her door. It was rumored that the verleth made no sound, was that true? She’d never seen one in person, those who had were dead.

The quiet creak of her door filled the room.

She fought to keep her breathing quiet, biting her lip, her chest rising and falling too fast. Were those soft footsteps or was her mind playing tricks on her? [strong start! I NEED TO KNOW WHAT OPENED THE DOOR!]

Thank you, Dante, for the critique! We are showcasing three mentor critiques each day leading up to the Pitch Wars 2020 submission window, so make sure to read the other two critiques for today and come back tomorrow for more.