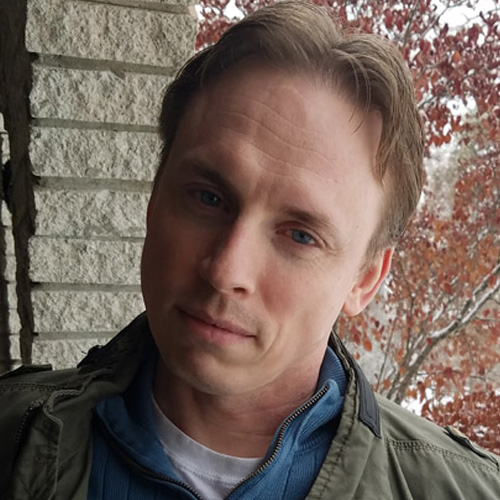 Despite what his family thinks, Joe is not a spy. When he isn’t writing, he travels the country investigating disaster sites. Before that, he taught Criminal Justice, Montessori Kindergarten, and several martial arts. Joe is an alum of the Pitch Wars program.

Joe has too many interests and finds every topic under the sun absolutely fascinating. He especially loves the stories behind the stories. Joe splits his time between Michigan and California. He is married to his first and biggest fan, who is not allowed to bring home any more pets.

When Ken Allen is framed for the murder, the only way to escape the deathtrap is to play the part of famous, fictional superspy Jove Brand for real. Ken confronts Chinese film moguls, Russian oligarchs, and the dowager queen of the Jove Brand franchise, all of whom enjoy dwelling in elaborate lairs and will do anything it takes to secure the rights to the multi-billion dollar franchise.

[I got a thriller! And set in Hollywood to boot. Let’s dig in. Length wise, you are close to the sweet spot of 250 words.]

I’m seeking representation for my debut novel, TITLE (90,000 words), a Pretty as a Picture meets Hustlers [The first comp is very strong. The second I needed to look up as it’s a movie] suspense/thriller.

[Opening with the bookkeeping stuff (word count/genre) is a solid approach. Personally, I like leading with the hook. I want the agent excited off the bat.]

Allison Patrick needs to keep her Club Ten job on the down low [Explaining why here helps set the hook and tightens the query]. The ’90s recession [My read is that the book takes place in the 1990s. That setting can be used as part of the hook.]  [derailed already implies its temporary] derailed her post-grad plan for a paid position in politics [If Allison has political aspirations, then she would know taking a job like this could kill those aspirations. However, if she knows Club Ten is a great place to gather dirt and demonstrate you’re a backroom player who keeps secrets, it makes a lot of sense for her to work there. It also shows her as someone savvy and proactive]. So, she covers the bills by serving booze to Hollywood’s rich and pervy at the glitzy Sunset Boulevard strip joint. In a thong and bustier. Ugh. But soon she’ll save enough money to take an unpaid internship in her field. didn’t work at an Applebee’s in the Valley. [This last sentence doesn’t add much].

Only Club Ten won’t stop making headlines. Or racking up a body count. The club’s enigmatic owner drowns under mysterious circumstances. Hollywood’s hottest rising star , Heston Stahl, is shot dead after skipping out on his tab . [Because this is a period piece, it’s unclear if this amount is small or large due to inflation. I also avoid specifics in a query as much as possible. If I can avoid a name, I avoid it. Specifics like dollar amounts also can raise questions that take the agent out]. Allison finds Heston’s body when she tracks him down to the collect the tab. Then she finds herself in the tabloids. [This is our inciting incident. Putting it higher up in the query strengthens the pitch.]

[‘Finds’ is used twice back-to-back in these last two sentences. Personally, ‘finds’ feels passive to me, as if the universe were acting rather than characters. I avoid it.]

Welp. Her secret is out.

But Allison has problems more perilous than explaining her embarrassing resume. Like, staying alive [We lose the stakes of her covering up her dark secret, but get stakes surrounding survival. Decent trade but now Alliison’s dreams are destroyed. Is there a way she can recover them?]. Because Club Ten turns out to be a deadly nexus of Hollywood’s famous and infamous [This is part of the hook. I’d toy with placing it earlier]. An abusive movie producer. A charismatic, cagy agent. A sexy B-movie actor with unsavory connections. A dirty cop turned entrepreneur. Everyone has an angle and a secret—and Allison knows more than she thinks does [Good stuff]. Enough to put her in the crosshairs of a killer determined to keep his own business on the down low.

[A lot is happening to Allison, but her role feels completely reactive. A beat here that shows how Allison turns the situation to her advantage in order to achieve her goals would stick this landing.]

TITLE was a finalist in the 2019 Writers’ League of Texas manuscript contest. My experience waitressing at upscale L.A. strip clubs frequented by celebrities during the 1990s inspired the story. Before becoming an attorney, I wrote and worked on non-fiction pieces published in Seventeen and Los Angeles-based Buzz magazine. [This is a very strong bio. As someone with an anemic bio, I love this. Not only should you keep it, you might try a draft where it’s up near your bookkeeping].

I’m seeking representation for my debut novel, a suspense/thriller where Pretty as a Picture meets Hustlers. A finalist in the 2019 Writers’ League of Texas manuscript contest, TITLE is based on my experience waitressing at upscale L.A. strip clubs frequented by celebrities during the 1990s.

In 1992 Hollywood, Club Ten is a nexus for Hollywood’s most infamous movers and shakers. As much as Allison Patrick hates serving drinks in a thong, Club Ten is the key to the cash and connections she needs to become a political queenmaker. When rising star Heston Stahl skips out on his tab, Allison has to catch him or cover it herself. Running Heston down, Allison trips over his corpse and falls face first onto the front page of the tabloids.

But Allison has problems more perilous than exposing her embarrassing resume. Like staying alive. Everyone tied to Heston Stahl’s murder has an angle and a secret— an abusive movie producer. A charismatic, cagy agent. A sexy B-movie actor with unsavory connections. A dirty cop turned entrepreneur. And Allison knows more than she thinks does. Enough to put her in the killer’s crosshairs.

Only Allison isn’t just looking to survive. She’s looking to turn a death warrant into her ticket into the big leagues.

TITLE, complete at 90,000 words, is my debut novel. Before becoming an attorney, I wrote and worked on non-fiction pieces published in Seventeen and Los Angeles-based Buzz magazine.

Thank you for the consideration,

Describe your relevant experience. I trace the words in pencil and ponder how I’ll distinguish myself on an application [Nitpick, but we know it’s a written application from the context of the first sentence] to waitress at a topless bar. My educational credentials aren’t going to cut much ice. Graduated with honors and a political science major. Student council. Co-captain of the women’s swim team. But I’ve never set foot in a strip club before today. Never seen a lap dance. Never worn a thong as an outer garment [Interesting distinction. It tells us something about Allison].

My eyes search the lobby, as if I’ll find answers embedded in its [An adjective here helps us place where Club Ten lies on the economic ladder. Hard wood/judges says upscale, pre-finished says low class] wood-paneling. The walls offer framed posters of strippers, styled like arty burlesque advertisements. the young woman behind the hostess desk smiles encouragingly. With her sleek bobbed hair and stylish black cocktail dress, I could envision her at Spago if not for the sound of Van Halen vibrating the red-leather upholstered double-doors behind her [Love this sentence. It accomplishes multiple things, demonstrating your skill as a writer]. I shift in the velvety cushions of the claret-colored couch. Try to focus on the application laying on the glass-topped table before me.

[How does Allison answer the first question? Her answer to this question tells us how she presents herself to the world. We know her inner self, what’s her outer presentation? If she’s a strategist, a smart ass, etc., this is an opportunity to show it.]

How did you hear about Club Ten? That one’s easy, at least. I read LA Weekly’s profile of Jack McCaffrey, ex-LAPD officer and SoCal’s self-proclaimed “King of Girlie Clubs,” [I assume Jack appears later. If not, consider taking the name out. Readers try to track names, and we have to decide where we want to direct their mental effort]  while preparing for another night on my friends’ plaid wool couch [You are already setting one scene, building the visual in the reader’s head. Making them envision another by flashing back takes them out of the first setting]. Club Ten is Jack McCaffrey’s Camelot, a luxurious Sunset Strip topless bar featuring L.A.’s prettiest students [Consider ‘co-eds’ here to clarify they are no longer in high school. Or not, if you are conveying how gross Club Ten is.] and aspiring actresses onstage. In the article, he boasted his top waitress made over $2,000 on her best nights

[Summary: I like this page. It establishes the who and where quickly. It gives us several sensory experiences to draw us in. I think you can bring more of Allison’s voice into the prose through word choice to better show us who she is. First person present is growing in popularity, so I think it works fine.]

Thank you, J.A. Crawford, for the critique! We are showcasing three mentor critiques each day leading up to the Pitch Wars 2021 submission window, so make sure to read the other two critiques for today and come back tomorrow for more.