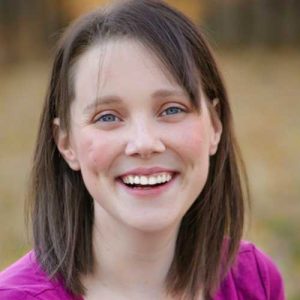 Olivia Hinebaugh loves all stripes of literature for children. When she isn’t writing fiction, she can be found writing freelance, making art, discovering new songs on spotify, texting her writing buddies, or folding laundry. She lives near Washington, D.C. with her spouse, three kids, a dog that looks like a coyote, and a one-eyed cat. The Birds, The Bees, And You And Me is her debut novel. 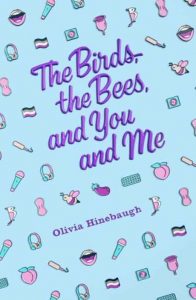 Seventeen-year-old Lacey Burke feels like the last person on the planet who should be doling out sex advice. For starters, she’s never even kissed anyone, and she hates breaking the rules. Up until now, she’s been a straight-A music geek that no one even notices. All she cares about is jamming out with her best friends, Theo and Evita.

But then everything changes.

When Lacey sees first-hand how much damage the abstinence-only sex-ed curriculum of her school can do, she decides to take a stand and starts doling out wisdom and contraception to anyone who seeks her out in the girls’ restroom. Meanwhile, things with Theo have become complicated, and soon Lacey is not just keeping everyone else’s secrets, but her own as well.

Peter cannot fight for his life, which is problematic because somebody wants him dead. [I get that this is humorous matching up super high stakes with super low-stakes wording, so I get that tone, I just don’t think this is the best way to start things off. It feels a little vague. Maybe go for “Peter could fight off the literal monsters who are after him, if only Thor would teach him how to wield those lightning bolts.” Tell us about the story! There’s room for tone elsewhere!]Complete at 66,432 words SAY IT AIN’T SO [Just want to make sure you know this is also the name of a song by Weezer, so I’m probs not the only person who immediately starts singing it when they see the title. is an own voices young adult contemporary fantasy dealing with themes of mental illness. [Look up current best practices about using own voices. Like, do you specifically have to say which aspect is the own voices bit? I’m assuming you mean you deal with anxiety–hi, me too, anxiety high five–and not that you’re a demigod] SAY IT AIN’T SO combines the voice of Simon vs. the Homosapien Agenda with the comedy of The Epic Crush of Genie Lo. [I’m not familiar with the second title you mention. Maybe it’s just me, or maybe it’s not that well known? I tend to go for comps like “It’s comedic contemporary fantasy for fans of…” or “title is A x B.” Hopefully your comp titles will be ones that immediately draw certain elements to mind. Ex: Simon vs. I’m going to assume lovingly self-deprecating, possibly queer, definitely fun cast of characters. And if that’s off, maybe find a better comp! (also, are you steering away from Percy Jackson comps? Because that leapt off the page for me and would immediately put me in “gotta learn how to handle my super powers” territory. I know that ones MG, but you could say something like “fans of Percy Jackson who are aging out of MG can move onto my book!”)]

Sixteen-year-old Peter Masterson spends his time after school at swim practice or working at his mom’s horror-themed diner in the middle of Nevada. [I want to go to a horror-themed diner! Although, I feel like the purpose of this sentence is “his life is normal…until…” but the diner throws me for a bit of a loop. I think I’d lead with the anxiety piece. He’s getting the hang of balancing life with anxiety when a shapeshifting monster arrives in town intent on murdering him. [Try this, perhaps, “16yo Peter is coping with his anxiety. He goes to swim practice and his mom’s diner. He’s finally balancing school, work, hobbies, and worries about xyz (anxiety is pretty vague. Is he having panic attacks? Specific phobias? Intrusive thoughts about safety?) Nothing will mess with carefully cultivated balance quite like a shapeshifting monster intent on killing you.” Or something. I like this idea of delicate balance being thrown off.by something huge and scary.

Peter learns he’s the Norse god, Módi, son of Thor, meant to inherit his father’s powers of the storm. [How does he learn this? That seems an important detail! What else arrives with the monster? Do his powers start to manifest? Do the gods just start showing up?] With the help of other gods [I’m assuming other gods from Norse mythology?A lot of people are familiar enough with some of these gods that they could be mentioned], Peter must find Thor’s three magical objects meant to help him control a storm. [maybe bring back the anxiety here. He’s gotta go on this epic quest, even though he’s still worried about xyz]

One object is located in the home of the monster who is after him, who turns out to be the stepdad of Jenna, the girl he wants to ask out. Peter will have to betray Jenna because without the magical objects, Peter won’t be able to control lightning to protect himself. In other words, he’ll die in a pretty awful way. [This paragraph feels like too much detail that’s hard to explain. If you’re gonna mention Jenna, maybe mention her in the first paragraph and then bring her back up here. Like just because he’s learned he’s a demigod, doesn’t mean he stopped caring about Jenna. Also, watch passive voice “one object is located.” Try instead “Peter’s search for these objects brings him to Jenna’s house, which is inconvenient for these reasons (again, making life or death stuff sound way underplayed, which is funny!)

When I am not working on creative fiction, I write exhibit content for a large science museum in Philadelphia, PA. The main exhibit I helped develop was Vikings: Beyond the Legend, which provided casual fuel for my revisions stage. Between exhibit projects, I take advantage of our collection to learn more about lightning to build a reasonable world for the thunder gods in SAY IT AIN’T SO. [I might try to tighten this up. It’s a really cool gig and it obviously informed your writing, but I bet you could get most of this info in a couple paragraphs. “When I’m not writing fiction, I write… Working on the exhibit…along with exhibits about lightning really informed the world of SAY IT AIN’T SO.]

Thank you, Olivia, for the critique! We are showcasing three mentor critiques each day leading up to the Pitch Wars 2019 submission window, so make sure to read the other two critiques for today and come back tomorrow for more.