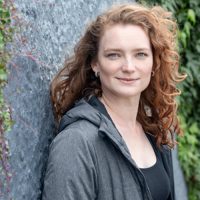 Karah Sutton is the author of the middle grade fantasy adventure A Wolf for a Spell (Knopf Books for Young Readers/Random House Childrens’ Books). Inspired by her Russian heritage and the fairytales that have enchanted her since childhood, A Wolf for a Spell was an American Booksellers Association Indies Introduce selection, an Indie Next List Top 10 selection, and a Junior Library Guild selection.

Karah is also the Chief Publishing Officer for New Zealand-based video game developer/publisher PikPok, whose games have been downloaded nearly half a billion times in more than 100 countries worldwide. She has had the pleasure of working with some of the world’s most respected and well-loved entertainment companies including Disney, DreamWorks, Fox, and Cartoon Network.

Karah’s recent release, A Wolf for a Spell 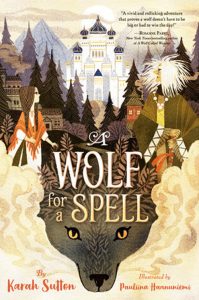 The Girl Who Drank the Moon meets Pax in this fantastical tale of a wolf who forms an unlikely alliance with Baba Yaga to save the forest from a wicked tsar.

Since she was a pup, Zima has been taught to fear humans–especially witches–but when her family is threatened, she has no choice but to seek help from the witch Baba Yaga.

Baba Yaga never does magic for free, but it just so happens that she needs a wolf’s keen nose for a secret plan she’s brewing . . . Before Zima knows what’s happening, the witch has cast a switching spell and run off into the woods, while Zima is left behind in Baba Yaga’s hut–and Baba Yaga’s body!

Meanwhile, a young village girl named Nadya is also seeking the witch’s help, and when she meets Zima (in Baba Yaga’s form), they discover that they face a common enemy. With danger closing in, Zima must unite the wolves, the witches and the villagers against an evil that threatens them all.

THE SECRET WORLD OF CLASSROOM 104 is a multi-point-of-view middle grade science-fiction novel. Its neurodivergent characters are school outcasts, much like the kids in THE UNTEACHABLES, but their luck changes when a time-traveling teacher reminiscent of Dr. Who arrives. With playful and detailed world-building, the manuscript is comparable to AMARI AND THE NIGHT BROTHERS. It is a stand-alone novel at 70k words, with the potential to be a series. [Some agents prefer that this sort of summary and comps go at the end of the query, so this can be something to check for as you research agents. But I think it works well here at the beginning.]

Sixth grade is going to be miserable for Adelaide and her classmates. Just like last year, they’ll be shoved away in the basement with the meanest teacher in school. But on the first day, they find that time-traveling Mr. Ridley has taken her place. [I love how this gets straight to the point in setting up the status quo and what events kick off the story. Something that feels missing though is a bit about Adelaide herself. If there’s a way to put something that gives us a sense of her personality—is she protective? Daring? Gentle? Is there some misbelief about her and her classmates such that this world ostracizes and relegates them to the basement (which is very shocking!)? You’ve set up an inventive and cruel world, but I feel like I need just a touch more detail to be really hooked.]

To their delight,[I’m not sure if this is necessary here, and I feel like it might land more strongly if you focus on a straightforward statement of what he tells them and then their reaction] he tells them of the Time-Space Administration’s (TSA) secret time-traveler league. The students dream of joining. No one has ever accepted them, and this is their chance to be a part of something big [Lovely setting up of why this feels important to them]. But to earn admission, the class must place in the TSA’s interscholastic entrance competition. If Adelaide and her classmates lose, they will be given mind-erasers to protect the TSA’s secrets and sent back to their isolated, sub-basement classroom. [Great stakes here, and clearly laid out. I do find myself wondering why he sees fit to tell them about this secret society at all, if it’s so secret that he’ll have to erase their memories? Is there something special he sees in them, or is this solely out of pity? This relates to the feedback from the previous paragraph, where I feel like you’ve set up the world and plot very strongly, but given us little sense of any of the characters other than that the world punishes them for seemingly no reason.]

When the class makes a poor decision [what is it? More detail here. Or if it’s too complicated to explain in a query, I’d maybe generalize this more and just say something like “But a careless mistake at the competition leads to their beloved teacher. . .” which would give it less weight/focus in the sentence structure] at the convention where the competition is held, it leads to their beloved teacher being accused of witchcraft in Salem, 1693. Any rescue effort will entail breaking time-travel rules—a violation that will eliminate them from the competition and ruin their chances of joining the league. But if Mr. Ridley is found guilty, their beloved teacher [repetition of “beloved teacher”] will be sent to the gallows. [I would reiterate their personal stakes here also, that they must save their teacher who has accepted them at the risk of becoming the basement outcasts they were once more]

This book was inspired by my sisters’ journeys with obsessive-compulsive disorder and bipolar disorder, and by my years teaching middle school English to special education students. I hope it will encourage readers to embrace who they are and to believe in themselves.

I am a member of The League of Utah Writers and regularly attend their conferences. I also belong to the middle grade writing group called #MGNarwhals on Twitter.

Adelaide Jenkins prided herself on being perfectly prompt, so it was especially worrisome to be running so late. [I can see that you’re going for a fun storyteller style voice, but I’m not sure if this particular sentence is the strongest way to start, as it feels overly “telly”. Are there ways you can show that she is always prompt in her actions themselves? Maybe she checks both a watch and the clock, maybe she notices time down to 3 minutes and 52 seconds?] Grabbing her backpack, she stole a glance at the moon-shaped clock on her yellow bedroom wall.

Three minutes. She had to hurry. [Also why is she late? What’s different about this morning? What was she doing just before the story began?]

“I’m late, I’m late, for a very important date,” popped into her mind. Despite her stress, or perhaps because of it, she pictured the silly white rabbit from her favorite childhood movie Alice in Wonderland. She envisioned him scampering towards the woods, his bloodshot eyes gaping at a golden pocket watch.

The image gave her a much needed [“much-needed”] chuckle. Luckily, she wasn’t quite as late as the rabbit had been, though she was cutting it closer than she would like. [I’m guessing that this is to foreshadow that she herself is going to enter her own version of Wonderland in this story, but placed here it stalls the scene a little. We’re now four paragraphs in and the only thing we know so far is that she’s late for something.]

Slinging her backpack over her shoulder, she made a mad dash for the front door, past the kitchen. The smell of burnt toasted made her wrinkle her nose.[This feels like a slightly odd throwaway detail. There might be an opportunity here to show that she’s at odds with her homelife, where everyone else is careless and in a rush compared to her own usual attention to detail? Otherwise I’m not sure what this adds. I would love to see sensory details that also do the legwork of telling us what her homelife is like.] She darted across the cul-de-sac and arrived at the bus stop at the end of Hearth Court.

Adelaide let out a sigh of relief. Her older sister Caroline was there, still waiting, but she barely looked up from her phone. The bus was nowhere in sight, though making the bus and being on time were two very different things. Adelaide hadn’t missed it, at least.

Taking a moment to catch her breath, she forced a flyaway strand of hair back into her perfect blonde bun and smoothed a wrinkle out of her pink miniskirt. [It’s wonderful that you show us how she’s fussy and finicky. I would love though if you could find some more unusual ways to show this. Smoothing out an uptight bun is a fairly common trope, and while it’s not necessarily the wrong choice, it would be fun to explore and look for some inventive ways to show how fastidious she is!]

Thank you, Karah, for the critique! We are showcasing three mentor critiques each day leading up to the Pitch Wars 2021 submission window, so make sure to read the other two critiques for today and come back tomorrow for more.