Aimee is the author of Every Ugly Word, (Alloy, 2014) a gripping and emotional story about a high school junior who can talk to her future self in the mirror, but is forced to deal with the devastating consequences of bullying; and Dark Touch (Alloy, 2016), an equally raw story about a young, abused woman whose feelings are communicated to anyone she touches—including the guy she’s falling in love with. 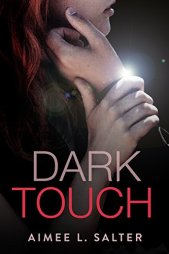 Tully isn’t alone in her skin. Whenever she touches someone, they feel everything she feels. All her ugliness. All her darkness. All her pain.

The only thing she wants is to be left alone–and to finally get out of her small Oregon town.

But then she meets Chris. He’s everything she’s not. Light. Trusting. Innocent. And he wants Tully.

Tully knows she should spare him the heartache of being with her. But when he touches her, she’s not sure she’ll have the strength to push him away–until he learns about her dark past, and what really goes on in her ever-decaying home.

From the author of Every Ugly Word comes a poignant, emotionally raw story about the violence that plays out behind closed doors and the all-consuming passion of first love.

It’s been 25 years since the Nazis won the Second World War.

[Excellent opening! Tells me exactly where and what we’re about to read (II World War alternate history)]

The Jews have mostly disappeared. The Reich has expanded across three continents. And a single wrong word could get you killed.

[Aaaaaaaaand we’ve got character driver, stakes, and backstory in one. Home run! (Just being nit-picky, I’d love to know the words, or at least an indication of what they were so we understand exactly how precarious this is. There’s a difference for the reader in the impact between death as the punishment for someone saying “Dad’s planning to kill POLITICAL LEADER” or “Dad wants to move to America”—do you know what I mean? ]

Now an adult, Markus is guilt-wracked, unemployed, and lost. His only friend in the world is Frank—a man he grew up with and looked up to. A man who is now a high-ranking Nazi official on a mission to root out and destroying anti-state thinkers, rebels, and Jews.

When Frank recruits Markus to drive a truckload of prisoners to a concentration camp, Markus will be faced with an impossible choice: be complicit in the murder of children or become the person his best friend is hunting. His decision will change not only their friendship and their lives, but the future of the Reich itself.

[And here we have the ultimate conflict and stakes of the story, FOR THE WIN.]

Complete at 52,000 words, WE ARE THE HUNTED is an alternate history novel about resistance, redemption, and humanity in a world where none of it seems possible. It’s Man in the High Castle meets Atonement. A story of real consequences and real people in a surreal world.

[Literally the only thing that’s given me pause in this query is the wordcount. Traditionally historical novels need a greater wordcount than contemporaries to familiarize the reader with the world—and you’re dealing with world-building an alternate reality on top of just difficult societal/cultural rules, so I have a little concern that this story might not be fully fleshed out. However, I’d want to read material to see. That wouldn’t stop me from requesting pages.]

I’m a career copywriter and travel writer with 15 years experience, an active blog and social media presence, and a background in marketing as well as writing. Previous publication credits include Get Lost Magazine, International Living, and the Huffington Post.

This is simple: If this was submitted to me as a mentor, I’d skurry to read any submitted material, or request pages if there was none.

The two notes I asked about the blurb are being picky. You could query with this as-is and, assuming the writing of the book matches the power of the query, I think you’d have a lot of requests from any agents interested in alternate history stories.

With that said, even with my limited knowledge of historical genre, I know the general wordcount minimums are higher because of the extra world-building, and I suspect you may get questions or agents might have concerns that your story hasn’t been told to its fullest potential (or you may be making assumptions about reader’s understanding of that world/time in history, and need to improve your world-building). Either way, be prepared for questions about that—and if you already have some concerns that there are areas of your story that need to be developed further, follow that instinct.

But as a copywriter, you’re probably great with the economy of words. So hopefully that’s not a problem, and agents are just rolling over themselves to request it (and offer rep!)

Regardless, this is a successful query that you should be very proud of. One of the best I’ve read in terms of communicating the guts of a story. Very, very well done.

She has lectured at Keystone College on Celtic Mythology and will be presenting a workshop on Perfecting Query Letters and Pitches at their Gathering Conference in July 2016.

In all her seventeen years, Holly had never telepathically linked to her brother. But, as she gripped her L.I.N.K. computer bracelet and watched his last video message for the thousandth time, she felt the buzz again.[What buzz? Why is it significant?] every blood cell vibrating along with the rhythm of the cargo jet.

She swallowed hard.Her brother was smiling, sure, but what about his cold eyes, his dilated pupils? She’d seen that vacant look once before.

The low-battery warning light flicked in the top corner of the screen. Hopefully it would last until she got to a recharge station. Her L.I.N.K. gave her access to the first four levels of N.I.M, the Novus Imperium Mainframe. It could show her [eight] different skateboard routes to the performance arts college, [thirteen] ways of violating Protocol, and [twenty] [Spell out your numbers] reasons why missing her daily medication could be fatal.

But, could it pinpoint her brother’s current location? Or whether [or not] he was okay?

{She has a great, snarky voice. I don’t think you need the internal thought here to echo]

Holly sighed and let her head fall back against the headrest, barely registering the cold hard metal. The DataStream on the side of the jet [registered an altitude of] ten thousand feet . Surely it couldn’t be much further [to where]?

The [asshat (not hyphenated)] at the check-in desk had described the 90-minute flight to the [name the academy so the reader understands who she is and where she is going] the pilot academy as ‘comfortable’. Clearly that was suit-talk for ‘crammed into a titanium-lite coffin with complimentary [moldy]-feet aroma.’ Mix that with the waft of Bio-fuel seeping up through the floor, [and] Holly had pushed down the feeling of nausea the whole way.

Holly unclenched her fingers and wiped her sticky palms on her academy-issued jumpsuit[,] then snuck a look around the cabin at the other successful recruits.

All wore the same expression[—]like a DocBot had just informed them this month’s medication had failed: ‘We regret to inform you the meteor infection has mutated and you’re going to die, a slow, [agonizingly] painful, and puss-filled death. Have a nice day now.’ [This gives us some background on the health issue she’s facing. Can you combine these?]

Not her problem. As long as they weren’t staring at her{Why would this bother her?},

Her eyes dropped back to her L.I.N.K and her heart thudded against her ribs.

Tapping “re-play”, her brother’s face appeared warped and pixilated on the curved screen. She struggled to hear the audio over the drone of the jet thrusters, but it didn’t matter[.][S]he could recite the message word for [word, draw] it frame by frame–how Daniel’s fingers trembled when he lifted the glass of water to his cracked lips; [his] gaunt cheekbones, clenched jaw, skin ashen against the blue-grey material of his Protector uniform.

A memory flashed across Holly’s mind of a different face—fresh, rosy, alight with expectation—the day he received his acceptance E-file to train with the Imperium police force.

Very interesting world you are setting up! A couple of quick notes. Combine the information about the illness and her need for medication. Cut the repeated content in the first paragraph, and really limit your use of colons and semicolons to only when necessary. Good luck in PitchWars! I hope my comments were helpful to you!

Thank you, Aimee and Kelly, for your critiques!