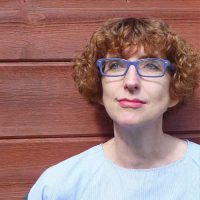 Kip Wilson is the author of White Rose, a YA novel-in-verse about anti-Nazi political activist Sophie Scholl. Kip holds a Ph.D. in German Literature, is the poetry editor at YARN (Young Adult Review Network), and wrote her doctoral dissertation about the poet Rainer Maria Rilke. She’s lived in Germany, Austria, and Spain, and currently calls Boston home. 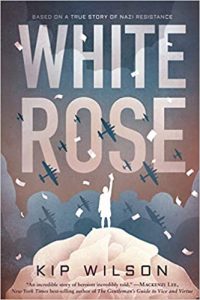 A gorgeous and timely novel based on the incredible story of Sophie Scholl, a young German college student who challenged the Nazi regime during World War II as part of The White Rose, a non-violent resistance group.

Disillusioned by the propaganda of Nazi Germany, Sophie Scholl, her brother, and his fellow soldiers formed the White Rose, a group that wrote and distributed anonymous letters criticizing the Nazi regime and calling for action from their fellow German citizens. The following year, Sophie and her brother were arrested for treason and interrogated for information about their collaborators. This debut novel recounts the lives of Sophie and her friends and highlights their brave stand against fascism in Nazi Germany.

Hello! I am seeking representation for a YA graphic novel project called Title.

Set [how many?] centuries in our future, Title is the story of a [I’d delete “a” and the comma before Tomas’s name] restless 17-year-old, Tomas Martinez, who longs to liberate his family from a debtors’ colony on Pluto—[A comma would be better than an em-dash here.] and of peace-seeking Concordia [Why does Tomas have a last name, and not Concordia? I would personally delete his.], also 17 [You might consider “peace-seeking 17-year-old Concordia” instead of this construction.], who’s been fated to fight [The mention of fate takes away her agency. I’d say “who fights” instead of “who’s been fated to fight.] among the stars while wielding [I’d delete “while” and add a comma after “stars”] a living alien sword that she does not want [I’d delete “that” and change “does not want” to “never wanted in the first place.” Sorry for all these suggestions! The basic info you have here is really good and draws me in, but making it even snappier will grab the reader’s attention right away.].

After moon-hopping across our solar system for years, Concordia and her father are laying [lying] low on Pluto before heading out to the alien regions of [I’d delete “the alien regions of.] interstellar space. But when a malfunctioning mining droid attacks their habitat– and endangers Tomas’ uncle in the process—[Here I’d again ditch the em-dashes, and switch this to “habitat, endangering Tomas’s uncle,” cutting “in the process.”] Tomas discovers Concordia’s sword and uses it [Instead, I’d say “Tomas grabs Concordia’s sword”] to stop [“and neutralizes”] the threat. Realizing that they might be able to help each other accomplish their goals, [I’d cut this. The next sentences show this.] Concordia decides [Instead of “decides,” consider “makes a deal.”] to train Tomas as the sword’s next wielder, which will enable him to qualify for an interstellar mercenary guild… [A-ha! Instead of the ellipsis, this is the perfect place for an em-dash! Picky note: it should not have surrounding spaces.] and with luck, earn enough to liberate his family from their indenture. In return, Tomas will tutor [Instead, “agrees to tutor”] Concordia in the customs and traditions of Plutonian life, so that when she’s relieved of the burden of the sword, she [“and her father” (Otherwise he just kind of disappears.)] can fit in among Pluto’s citizens and finally find the home she craves [“they crave” if you include the father. But also: I thought they were planning to head for interstellar space? I’d focus on one goal or the other throughout.].

Matters are complicated, however, by Concordia’s great secret: her mother, Vitrius, is searching for the sword, having used it herself during a failed campaign of brutal liberation on Mars. [I’d trim this to: “Unfortunately, Concordia’s mother, Vitrius—who used the sword during a brutal liberation campaign on Mars—wants it back.”] When Tomas begins having dreams [Instead of “begins having dreams,” just “dreams.”] that Vitrius is drawing near, Concordia realizes that their time is short– and wrestles with whether she should share her controversial past with her new friend. [I think you could cut everything after “near” in this sentence and the first part of the following sentence, and then continue with what *both* characters must decide: “Tomas must decide if he should still flee to chase his opportunity while Concordia must decide if her own action might bring about peace—for herself and her people” (or whatever her specific decision is.)] And when the United Terrans military arrives on Pluto to intercept Vitrius, guaranteeing a conflict with her forces, Tomas must decide if he’ll flee to chase his opportunity– or stay to defend a world that he’s grown to despise. As circumstances tighten upon both of them, their families will be tested, their dreams will be put at risk– and a long-simmering threat to the solar system will finally come to a boil. [This last sentence feels a bit generic. I think you could end it after mentioning the decisions.]

Title is a stand-alone adventure with series potential, and as a 168-page graphic novel, will appeal to readers of prose novels like Red Rising or Nyxia, as well as comic stories like Daniel Warren Johnson’s Extremity or Wonder Woman: Dead Earth. As the writer-artist of six previous graphic novels, I think fans of stories like The Legend of Korra, Cowboy Bebop, or Arthurian legend might find it to be a fresh spin on space adventure and the complicated art of living up to a heroic legacy. [I personally would delete the second half of this sentence (starting with “I think fans ….” A couple of comps is fine, but this feels like too much. Instead, please use this space to name at least one of your published graphic novels! (“I’m the writer-artist of six graphic novels, including …”)] I appreciate your time and consideration! [I tend to over-exclamation-point myself, but I’d recommend swapping in a period here.]

Title: Graphic Novel Script [Please note! If selected for PitchWars, you might be able to include the artwork with your first page. This has happened with at least one other project in the past (Pie in the Sky by Remy Lai—fantastic book, btw).]

Panel 1: We open on a full-page splash of Tomas Martinez [Again, I’m not sure why he has a last name and Concordia doesn’t. I wouldn’t include it if their family backgrounds aren’t relevant. Also, I have no intention of identity-policing, but if you’re going to use a Latinx character, people will assume/hope you’re either part of the community or have done thorough research.], 17, free climbing up a gargantuan recurved girder with abject determination on his face. He’s dressed in light, simple clothing, with gloves on his hands to help the climb– and a pack on his shoulders, out of which drapes a little bit of colorful fabric.

Sprawling out [cut “out” (FYI some of my cuts might seem picky etc. but keeping only the most essential words makes the writing cleaner)] underneath him is the industrial landscape of Tombaugh City—[delete this trailing space, below as well] Pluto’s singular human colony, and home to a substantial mining operation, (which is [I’d cut the parens and “which is”] operated primarily by a gaggle of indebted servants and their families). Tomas is near the apex of its transparent protective dome, and one slip means a steep fall back to the ground floor. Through the dome’s walls we see the grey, barren landscape of Pluto– and countless stars just beyond.

Panel 1: Tomas looks back down the girder, annoyance on his face, at [“toward” (hard to look *at* a voice)] a voice below.

Panel 2: We’re now above Tomas, looking down past him at his friend, JIMM, who’s similarly making this climb– and who looks pretty distraught about his decisions at the moment.

Panel 3: Switching to an upward shot, we’re now amongst a crowd on the ground plane that’s starting to notice as Tomas and Jimm move out of an area of low illumination near the top of the dome. (It’s clear from the state of the buildings and people around that this is not a prosperous community– Tombaugh City represents a hard life, and few people have a reason to look up like this anymore.) Various drones flit back and forth above as crowd members gesture and gawk.

One person in specific [cut “in specific”]—CONCORDIA, also 17—is ignoring [“ignores” instead of “is ignoring”] the crowd and simply trudges away from the stir. She’s clad in a bulky environmental suit, but her helmet is off and is dangling from a band lashed to Concordia’s [“her”] waist. Over her shoulder, she’s carrying a sealed parcel from the vendor’s district. It’s important that she stand out now, as we’ll return to her in just a bit… [I’d cut this last sentence. Her placement in the art will make her importance clear.]

Panel 4: Back on Jimm, crestfallen, as Tomas works to guilt him into finishing.

Panel 5: Back on Tomas, a smirk lighting up his face as he continues his climb.

[Just an overall note to add that I was excited to see this query and opener! I am a huge fan of graphic novels, and would love to see more YA in all genres out there. Best of luck with this!]

Thank you, Kip, for the critique! We are showcasing three mentor critiques each day leading up to the Pitch Wars 2020 submission window, so make sure to read the other two critiques for today and come back tomorrow for more.