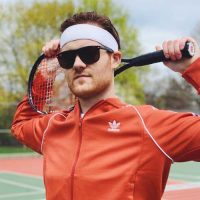 Jeff Bishop, aka “Jeffrey G. Buckets”, aka “Carly Rae Jeffsen”, aka “Jeff Up 2 The Streets”, is both alive and a college graduate. His mother is equally proud of both feats. He was a Pitch Wars mentee in 2017.

His debut novel, A HEAVY DOSE OF ALLISON TANDY, will be published by Putnam/Penguin in Summer 2020. He is represented by Christopher Schelling of Selectric Artists.

But when Cam starts taking painkillers following knee surgery, suddenly he can see Ally—yes, comatose Ally—appearing seemingly out of thin air, and he quickly realizes this summer might just be interesting after all. And in true Allison Tandy fashion: she has a mission for Cam—one that could just get them both killed.

Set loosely in a modern John Hughes universe, A HEAVY DOSE OF ALLISON TANDY is perfect for fans of Hughes, John Green, and other guys with four-letter “J” names.

Before his eyes, the corpse began to fall. [This is just a personal strategy, so take it or leave it, but I like to isolate the lines that I think really shine, that way the agent/mentor has a better chance of remembering it. There first page/first chapters are so ridiculously brief, you’ve gotta give them a reason to ask for more. And that doesn’t always mean a cliff hanger. My first two chapters were a mess when I entered Pitch Wars, but my future mentor liked my humour enough to roll the dice. Obviously first lines are vital, so if you think you’ve nailed it, throw it up top, let it stand on its own!]

He watched as she slid, her limbs dangling , in horrible slow motion towards the ground. And because fate is a malicious creature, she fell not forwards or to the left, but to the right, onto her mother in the low armchair. [Just say she fell to her right, the stuff about fate and which direction she fell is extraneous.] Her head scraped against the corner of the chair, knocking her hair out of the elegant up-do. Mrs Graham screamed as her dead daughter’s hand landed with a dull thud in her lap.

Toby rushed out from behind the camera, but it was too late. The girl lay in a crumpled heap on the floor . She was particularly beautiful, even in death: tall and elegant, with thick locks of mahogany that now fell over her shoulders. [I encourage every dude out there to take a gander at the Men Writing Women Twitter feed before taking a crack at writing physical descriptions (I’m not immune, by the way!)] His colleague, Kitty, had made a special effort with this one, and the eyes she drew on the girl’s lids were her best work yet. Toby bent down to pick up the girl and ease her back into the stand, but Mrs Graham leapt up and slapped his hands away.

“Get off her,” she shrieked. “Don’t you think you’ve done enough damage already? Get out, you fiend. Get out. Get out!” She pulled out a hat-pin and menaced him with it.

Toby grabbed his camera and tripod and fled . He had left the corpse stand in the parlour and that would be coming out of his pay, but there was no way he was going to face an angry, grieving mother to retrieve it. The tripod banged awkwardly against his ankles as he ran.

He threw open the door and there was a thump and a cry. [Why is he fleeing? Did he kill the girl? Confused here.]

He looked down at Kitty, sitting on the floor in front of him, rubbing her nose.

“What are you doing down there?” he asked. “Come on, we’ve got to get out of here.” [I know people recommend starting in-scene, right in the middle of the action, with good reason. But if you’re going to take that approach, you have to make sure it’s clear to your reader what’s happening. Is he a corpse photographer? I can’t tell. My advice would be to end the first chapter with the girl dying; give us a little more about what’s going on, whose POV we’re in, why he’s taking these pictures, etc. Then, hit them with the “oh no, she’s dead” bit right at the end, leave them wanting more.]

Thank you, Jeff, for the critique! We are showcasing three mentor critiques each day leading up to the Pitch Wars 2019 submission window, so make sure to read the other two critiques for today and come back tomorrow for more.