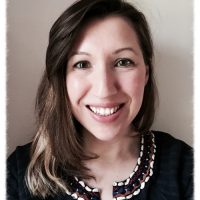 Kate Karyus Quinn is an avid reader and menthol chapstick addict with a BFA in theater and an MFA in film and television production. She lives in Buffalo, New York with her husband, three children, and one enormous dog. 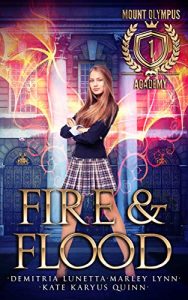 Revenge. That’s why I decided to join the assassination class at Mount Olympus Academy. A monster killed my father and grandmother – and I’m going to make them pay.

But first I have to learn how.

I’m Edie. Once I was just a normal girl with asthma and a bad back. Now, though, I’m at a school taught by Greek gods. My classmates are vampires, witches, and shifters. We’re all training to fight in the war between the gods and monsters.

There’s also…Val. He’s a vampire, but he’s different from the others. Plus, he’s got secrets too.

I get secrets. The wings that sprout from my back were hidden from me my entire life. I also sometimes breathe fire. But no one – including me – can figure out what I fully shift into. Honestly…a part of me doesn’t want to know.

But if I’m going to avenge my family, I need to figure it out before I flunk out.

Fire & Flood is a young adult magic academy fantasy novel with non-stop action. It contains a spunky heroine, one best friend with the gift of sight… to see tomorrow’s lunch menu, a mean-girl vampire roommate with a carnivorous plant, and a meet-cute with her roommate’s hot twin brother that almost kills them both.

Twenty-eight-year-old Kalina has prophetic dreams of terrorist attacks [oddly specific visions] – a gift [is it a gift to have visions of terrorist attacks?] her aunt has forced her to keep secret. But when one dream predicts the death of her detective fiancé [so it’s not a great character intro to have her finally decide to do something about stopping terrorist attacks because this time it will affect her], Kalina risks her safety to save him.

With her secret exposed, Kalina is forced into hiding into [to avoid echo, maybe instead: ‘forced to hide in a secret…’] a secret world just below the streets of Detroit. It is an ancient world ruled by the Magehood who protect the Hexed, those magical beings who were cursed by the Greek gods. Kalina’s aunt gives her a new purpose: Kalina will learn magic to control her prophetic and dreamwalking powers so she can help the other Hexed. [Oh boy. I am confused. The Hexed. The Magehood. Dreamwalking. You’re throwing a lot out there, really fast, but it’s not all connecting. Try to avoid these named groups and instead focus on Kalina. Right now this story feels like her aunt is driving the action – instead of Kalina. Also, why does Kalina care about helping the Hexed? What does it mean – specifically – to have been cursed by the greek gods?]

During a dreamwalk, [What is a dreamwalk? You’ve used this term multiple times now, but it’s not a commonly known thing so you really need to maybe explain] Zo, a handsome fairy trainee introduces her to a rogue faction of the Magehood that uses magic to cure sick normals. Joining the rogues lets Kalina atone for the times she didn’t help others. [This section feels like a subplot – do you need this whole part in your query? I don’t really see how it connects to her helping the hexed.]

When a new terrorist attack strikes Detroit, Kalina and Zo cure the victims [cure them of what specifically?]. The cure they steal from the rogues turns the victims into jinxed beings with dark elemental powers. Their mistake unites the Magehood and rogues against them in a race to save Detroit from the jinxed beings threatening to shatter the earth. [But what happened to the Hexed? Also, I had to read this last sentence multiple times to understand it.]

TITLE is an #ownvoices Adult Fantasy novel complete at 69,000 words. It contains multi-racial characters. It’s comparable to THE HEAVENS [Is this a book? A movie?] with a Black JEAN GREY lead in a contemporary world based on reimagined Libyan/Greek mythology.

[I think you’re not focusing on quite the right things here. Here is what I took away as the core of the story: After a woman’s ability to have prophetic visions is exposed, she escapes to a secret underground world in Detroit that is ruled by magical cursed beings. She tries to learn how to control her magic and visions. She also meets a guy and he introduces her to a rogue faction of this underground world. The guy and rogue faction make her realize she should’ve done more to help others with her visions. So when another terrorist attack happens, she and guy decide to help with magic. But whoops! It all goes wrong and they make the sick into horrible monsters that start to attack the world. Now everyone is pissed at them and they need to fix it before…the entire earth is shattered? Not sure about the actual consequence at the end. But anyway, you can see how I was able to summarize without using names at all. Now, you can go back in and add character names, but I’d really keep all the different group names to a minimum – it gets really confusing in an abbreviated format like a query. I think you can also be more clear about her motivations and the nature of these terrorist attacks and maybe even what time period we’re in –  it feels maybe futuristic? Overall, though, with a little reshaping, I think you’ll have a solid query!]

Thank you, Kate, for the critique! We are showcasing three mentor critiques each day leading up to the Pitch Wars 2019 submission window, so make sure to read the other two critiques for today and come back tomorrow for more.