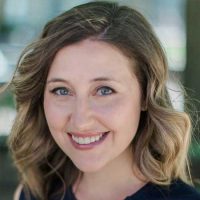 Kathleen Barber is a former attorney, incurable wanderer, and yoga enthusiast. Originally from Galesburg, Illinois, she is a graduate of the University of Illinois and Northwestern University School of Law. She now lives in Washington, DC, with her husband and son. Her first novel ARE YOU SLEEPING (Gallery Books/Simon & Schuster, August 2017) is being adapted into a series called “Truth Be Told” for Apple TV+ by Reese Witherspoon’s Hello Sunshine. Her second novel FOLLOW ME is forthcoming from Gallery Books on February 25, 2020.

The only thing more dangerous than a lie…is the truth. Serial meets Ruth Ware’s In A Dark, Dark Wood in this inventive and twisty psychological thriller about a mega-hit podcast that reopens a long-closed murder case—and threatens to unravel the carefully constructed life of the victim’s daughter. 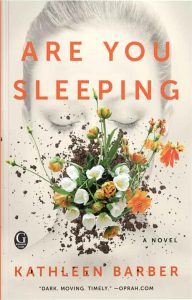 Josie Buhrman has spent the last ten years trying to escape her family’s reputation and with good reason: her father was murdered, her mother ran away to join a cult, and her twin sister Lanie, once Josie’s closest friend and confidant, went completely off the rails and stole her high school sweetheart. Josie has finally put down roots in New York, settling into domestic life with her partner Caleb, and that’s where she intends to stay.

The only problem is that she has lied to Caleb about every detail of her past—starting with her last name.

When investigative reporter Poppy Parnell sets off a media firestorm with a mega-hit podcast that reopens the long-closed case of Josie’s father’s murder, Josie’s carefully constructed world begins to unravel. Meanwhile, the unexpected death of Josie’s long-absent mother forces her to return to her Midwestern hometown where she must confront the demons from her past—and the lies on which she has staked her future.

If ever there was a situation that warranted the magical healing powers of chocolate, this has to be it. [I think this is a fun way to open the story. It’s voicey, and it hints at the character and her current situation. It’s slightly wordy, though, so consider revising. I would suggest: If ever a situation warranted the magical healing powers of chocolate, this was it.] The molten chocolate lava cake is calling to me from the menu card. [I think you can make your intro paragraph snappier by cutting the preceding sentence. If you decide to do this, I would then revise the next sentence to begin: I’ve read the menu description of the molten lava cake approximately …] I’ve read its description approximately one-hundred-thirty-seven times (okay, more like twenty-three, but who’s counting). That gooey, delicious, [strike the preceding comma] slice of heaven is the only thing that’s going to get me [Since the cake is theoretical at this point, consider revising to … the only thing that stands a chance of getting me … or something similar.] through this evening.

I went into the date optimistic. [Because the adjective “optimistic” is so far from what it’s modifying, consider revising. I suggest something like I was optimistic at the start of the date.] My underwear selection for the evening is evidence of that. [Ha! Love this. Consider whether a brief description of the underwear in question—lacy? silky? black? red? hot pink?—would sharpen this sentence.] Given this is blind date number twelve in as many weeks, maintaining optimism is no small feat. This is especially true, [strike the preceding comma] since the first twelve included one dinner at a strip club, [strike the preceding comma] and one gentleman who didn’t speak a lick of English. This was particularly [consider deleting this adverb to avoid two sentences in a row starting with a similar construction] baffling, in light of his impeccable English during online conversations setting up the date.

When today’s [I got the sense this is dinner, so should this be tonight’s?] date rejected my idea for a more affordable and relaxed atmosphere [Consider describing something specific here. Maybe she suggested mini golf or a happy hour at her favorite sports bar or a fun dive bar. Specificity here can help the reader get a better understanding of your character.], [consider moving the “instead” here and striking it later] insisting on one of the swankiest, most expensive places in town instead, I stayed positive. It’s [Consider describing the “It’s”—This date is or This night is.] going to set me way behind on my monthly budget, but what’s life without splurging on an occasional treat?

I held onto optimism through him being twenty minutes late to pick me up, without so much as a text to let me know.

Irritation flooded me when he laid on his car horn to signal his arrival, eliciting a scream from my sweet, [strike the preceding comma] but jumpy neighbor Annie [Is Annie an important character? If not, consider cutting her name here.]. But, [strike the preceding comma] I greeted him with enthusiasm anyway. [I like how she’s still holding onto her optimism through these initial red flags! It shows us something about the character.]

[Consider a transition here. Something about her enthusiasm flagging as he bored her during the car ride with some drivel or as he was rude to the valet or as he sat down without pulling out her chair.] Our night has only gone downhill from there. I read the description of the cake for the twenty-fourth, or the one hundred thirty-eighth time, depending on how much of a stickler you want to be.

Sitting across from me is Chip. Chip is not holding my attention. Optimism long ago worn down, I can now say with confidence that Chip is a bit of an asshole. [Tell us more about Chip! What does he look like? Why isn’t he holding her attention? What has he done to be an asshole? Draw a picture for your readers.] Chip… has stopped talking, and is looking at me. He’s… crap. He’s waiting for a response. [Ha, I like this setup here!]

Thank you, Kathleen, for the critique! We are showcasing three mentor critiques each day leading up to the Pitch Wars 2019 submission window, so make sure to read the other two critiques for today and come back tomorrow for more.