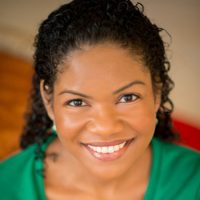 Preslaysa Williams is an award-winning author who writes heartwarming romance and women’s fiction with an Afro-Filipina twist. Proud of her heritage, she loves sharing her culture with her readers. A graduate of Columbia University, Preslaysa is a professional actress, a planner nerd, an avid bookworm, and a busy mom who wears mismatched socks. 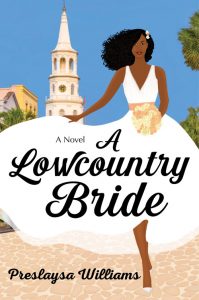 Maya Jackson has worked for a renowned New York City bridal gown brand for years and dreams of becoming its Head Designer. She has the talent, she just needs a chance to showcase her unique style. Due to an illness, she’s always prioritized her career over her personal life until Maya’s father fractures his hip and she returns to Charleston, SC. While home for only a few months, she’s thrilled to find an opportunity at the local bridal gown boutique, never expecting sparks to fly with its owner…

A military veteran and widowed father, Derek Sullivan hopes to save Always a Bride from bankruptcy in order to preserve the legacy of his mother. He also wants to reconnect with his estranged, twelve-year-old daughter, who is still recovering from the loss of her mother. The last thing he needs is a relationship with a beautiful, smart, complicated woman who will be leaving soon.

When Derek begins to fall for the lovely Maya, he knows there’s no future. But destiny has its own plans, and these two lonely people with big hearts discover that coming home to love is the best gift life can give.

A microphone with her name on it. Thousands of fans screaming for her son and his band. A gorgeous manager watching from the wings. [I suggest making this first paragraph stronger by adding in the overall story conflict here.]

Megan Gamble didn’t think she’d sing for the largest audience of her life at the age of forty-one, but her son Kyle’s band urgently needs a new backup vocalist. Megan makes her place on a tour bus full of creative and highly libidinous twenty-somethings, acutely aware that she hasn’t written music, performed, or been in a relationship since she became an unwed mother at nineteen [This looks like we are getting at the main conflict. Is music her passion and it somehow got derailed? If so, I suggest tightening up the first few sentences of this paragraph to let us know her main passion for music and why it got derailed.] She’s even more aware of Brandon, the band manager who–oops!–walked in on her while she was in the shower after her first show. [This can be deleted since it doesn’t directly address the main conflict.] Megan finally has her chance at the dreams she gave up long ago: a career in music and a romance with a highly attractive man. [Here it looks like we are getting to the main conflict – a chance for Megan to pursue music again. Does the romance add to this main conflict? If so, how?] She’s twenty feet from stardom, close enough to draw the attention of a man from her past. He’s Kyle’s uncle [Who is this person? Is this Brandon? I suggest naming the character here.], he never admitted that trying to physically coerce her into sex was the same as attempting rape, [Typically, if this was the main love interest in a growing romance, having a past that includes attempted rape  would not be attractive to a reader.] and he plans to create a false sex scandal in Brandon’s life if that’s what it takes to cash in on Megan’s ties to the band. [I suggest clarifying whether this is the villain or the main love interest. Right now, I am unsure of this character’s role in the story.] Unless, of course, Megan can stop him.

MY BOOK TITLE is a 88,000 word stand alone [standalone] work of women’s fiction with a generous dose of romance. Like DAISY JONES AND THE SIX by Taylor Jenkins Reid, the novel is very much set in the world of a high stakes music tour. It is also reminiscent of Jasmine Guillory’s ROYAL HOLIDAY, in depicting a romance between a man and woman no longer in the formative years of their twenties and early thirties.Great to include comp titles!]

My short story, “Everything But The Kitchen Sink,” was published in the After Dinner Conversations series and briefly topped its Amazon sales category. My work has appeared in the anthology, The Adventure of Creation, and I was awarded an honorable mention in the final Glimmertrain short story contest for new writers. I hold an A.B. in English from Princeton University and a J.D. is from the School of Law at UC Berkeley. I am an active vocalist, though mainly in the choral arena, and adore streaming my own son’s music on Spotify. [Nice way to add in a personal touch!]

More than twenty years after her last sound check, standing in front of a mike again felt like coming home and like jumping off a ten story building, perfectly normal and [I love this first line! I’m curious to see why she feels conflicted.] utterly insane.

“Mom, you gotta get closer.” Kyle didn’t even look over his shoulder, just leaned slightly into his mike and spoke.

The last time she’d sung in public she’d been in a church multi-use room that could hold a few hundred people, max. Now she looked out at thousands of empty seats. Back then she’d been nineteen, four years younger than Kyle was right now. Back then,[ Nice use of cadence with the repetition of “Back then”] she’d poured her heart into music, and then she’d learned her lesson. Never trust anyone in music, ever.

She’d ended up a unwed teenage mother without a college degree, feeling damn lucky to get hired as a paralegal. As of this morning, the job was gone, too. [I am a little lost at this point. How does becoming a teen mother connect with not trusting anyone in music? How did this lead to her becoming a paralegal? I suggest saving this paragraph for later on in the story since we are very early into the scene and getting adjusted to her situation as a singer.]

“Mom!”[What leads to this reaction? I suggest writing in the cause.]

Megan edged forward. [Yes. I suggest adding in the cause of this reaction prior to “Mom!”] “Sorry. This better? Check, check?”

Kyle nodded, his back still turned. The jeans that hung off his hips looked just like a pair she’d bought for him when he was a teenager. His hair was a longer, the stage lighting making his pale highlights stand out against his dark hair. And clearly Kyle had been working out between gigs; the shoulders which hadn’t filled out until late in high school were broad, and his arms were ripped.

I am a little lost at this point. How does becoming a teen mother connect with not trusting anyone in music? How did this lead to her becoming a paralegal?

Thank you, Preslaysa, for the critique! We are showcasing three mentor critiques each day leading up to the Pitch Wars 2021 submission window, so make sure to read the other two critiques for today and come back tomorrow for more.