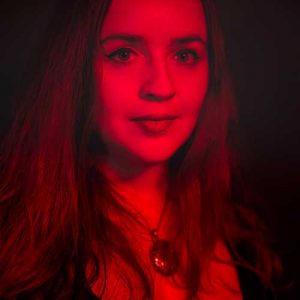 Kat Dunn grew up in London and has lived in Japan, Australia and France.

She has a BA in Japanese from SOAS and an MA in English from Warwick. She’s written about mental health for Mind and The Guardian, and worked as a translator for Japanese television.

Her fiction has been shortlisted for the Mslexia Novel Competition, and Dangerous Remedy is her first novel. 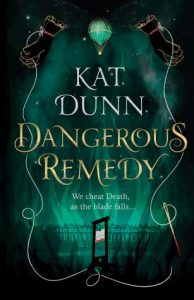 Camille, a revolutionary’s daughter, leads a band of outcasts – a runaway girl, a deserter, an aristocrat in hiding. As the Battalion des Morts they cheat death, saving those about to meet a bloody end at the blade of Madame La Guillotine. But their latest rescue is not what she seems. The girl’s no aristocrat, but her dark and disturbing powers means both the Royalists and the Revolutionaries want her. But who and what is she?

Varia discovers she’s the daughter of a goddess, and she’s pissed. Most would be thrilled to learn they’re a wind elemental, the magically gifted offspring of a god. But [I was expecting the explanation of why Varia is not happy to find this out after this but] Satomi and Yudai, twin water elementals, reveal her powerful ability and blackmail Varia into serving their Emperor. If she doesn’t help them, she’ll lose her dead family’s land forever. [This hooked me at the start, but I got lost at ‘blackmail’, you say most people would be thrilled, so I don’t get how it’s blackmail material? You also say Varia is pissed, which is an unusual reaction – but we don’t learn more – or is she pissed she’s being blackmailed? Which brings me back to the first point. I’m not quite following the leap to losing her dead family’s land, because I can’t work out how she’s being blackmailed. Why would she lose it?]

The Zenbatian Empire spans the continent, and Varia’s country has fought them for centuries. Her grandfather, a war refugee, must be turning in his grave knowing she’s aiding the Empire. Varia’s only desire is to return home, but she must complete a mission for the Emperor before she’s permitted to leave. But Zenbatia is not what she expects. Emperor Adeleke has sweeping plans for modernization and peace, and the twins spring an alien concept on Varia: potential friendship. [Friendship with who? The Emperor? The twins? Why was Varia chosen – because she’s a wind elemental? You mention later having to ‘master’ her magic, is it out of control? Do they need her magic specifically? Why?]

When shapeshifting monsters attack Zenbatia, Varia’s true task is revealed; guard the Emperor from assassins. [Why would this have been concealed?] Opening her heart to the twins and their allies may be Varia’s only chance at success, but death and isolation have closed her off from the world. If she can’t overcome her prejudices [prejudices against who? The Zenbatians? If they are the colonising empire you’ve said they are, and that they’ve been trying to expand their empire to her country, whether or not the Emperor has plans for modernisation and peace, I’m not sure this reads as ‘prejudice’ but rather ‘legitimate mistrust and anger’. This is a very sensitive and complex dynamic to write, and while I would never say ‘don’t’ it’s definitely something you’d want to handle with care] and master her magic, the collapse of the entire continent will be on her shoulders.

[Pitch feedback: This sounds like it could be a really exciting story! But you’ve got a LOT going on, and sometimes I had to read a few times to follow the story. It starts off as a ‘chosen one’ sort of hook, Varia is chosen (albeit via blackmail), but I was never quite clear *why* she was chosen. A query doesn’t need to cover heaps of the story – the traditional structure works for a reason. Character > what they want > what’s standing in the way > what are the stakes – gives us a way into the story that’s immediately engaging, and not convoluted – and leaves us excited for more. So feel free to pare back to really hone your focus and give us a clear story line – we’ll find out the other bits from the synopsis.

I also noted from the character names you seem to have influences from lots of cultures. While this can be done well (for example, Samantha Shannon’s Priory of the Orange Tree), I wasn’t clear from this pitch how that worked here and it’s something I would be very careful about how you approach it, to give due sensitivity and respect.]

TITLE is an 85,000-word standalone fantasy young adult novel with trilogy potential. It mixes the world-building of Leigh Bardugo’s Grishaverse with the diverse cast, friendships, and dash of romance in Avatar: The Last Airbender. I have a Communications degree from the University of Michigan and took so many writing classes I wound up with a Creative Writing minor. By day I’m a Marketing Manager for a startup in Chicago and I pursue my love of storytelling whenever I can.

At this rate, only an axe to the collarbone would get these strangers to shut up.

Varia slammed her frothy [nitpick, but mead doesn’t really froth? It’s like wine] mug on the counter and mead spilled onto the ancient bar top. “I’m not taking you, and that’s that.” This argument was costing her drink and her precious free time. A few patrons inside the dimly lit inn turned her way, rolled their eyes, and returned to their flagons. It wasn’t the first time Varia had gotten into a spat with strangers in town.

“It is imperative we traverse the pass as soon as possible. You must help us.” The man, Yudai, nagged for the hundredth time. In his late twenties, he was about a decade older than her and handsome in a rich, too-clean way. Unlike herself, he sure didn’t have blood spatter on his tunic from a hunt this morning. He had a calculating, cold look in his eyes that reminded her of a serpent and was drinking water for some gods-forsaken reason.

He kept babbling, so she tuned him out, taking another swig of honey mead. If she ignored him, maybe he’d leave her be. Getting a drink once per week was one of the rare moments she was able to relax, and gods damn this man if he ruined her evening.

“They bothering you?” Thurmond the barkeep asked quietly, cleaning out a mug with a rag. He kept the old inn’s kegs full and clients in line—for the most part.

Varia leaned in close. “Does it snow in winter? Of course they are. But you know how I got my second braid—I can handle myself.” She fingered one of the thick white-blonde braids hanging in her mass of hair. “I’m more worried about you.” These outsiders weren’t the normal folk who wandered into their sleepy town. They were…different.

Thurmond eyed the two thorns in Varia’s side. “I’ll manage as long as they pay their tab. I’ve got braids enough.” He jutted out his chin, showing off a handful of small plaits in his dark beard.

She winked at him. “If you want me to ‘accidentally’ spill mead on them, just give me a sign.”

[This is a nicely written extract, with little bits of world building dropped in effectively. My main bit of feedback is: I’ve read this before. The tavern, the mead, the barkeep, the mysterious strangers come to the village. For all that Varia seems like a fun character and you successfully drop in interesting bits of world building in, I think this set up hampers you. It’s a fine line between cliche and having fun playing with tropes, and I’m not sure you need to give yourself that challenge in your opening, especially when trying to catch the eye of busy agents. The world building & plot set up you do is fighting against all the other versions of this scene we’ve read, and takes the shine off what makes your voice, and this story, special.

This might be less of a problem in a later chapter, but for your opening, I wonder if there’s a more interesting setting you can show us? Something that tells us more about your world, something that shows us more about Varia? Or a twist on a tavern scene that stops us thinking ‘been here before’? I’ve got lots of confidence you can do this! The elements are all there, they just need reframing to make sure we focus on *your* story, and not things we’ve read before.]

Thank you, Kat, for the critique! We are showcasing three mentor critiques each day leading up to the Pitch Wars 2020 submission window, so make sure to read the other two critiques for today and come back tomorrow for more.