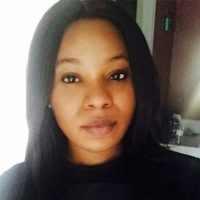 Deborah Falaye is a Nigerian-Canadian young adult author. She grew up in Lagos, Nigeria, where she spent her time devouring African Literature, pestering her grandma for folktales and tricking her grandfather into watching Passions every night. When she’s not writing about fierce black girls with bad-ass magic, she can be found obsessing over all things reality tv. Deborah currently lives in Toronto with her husband and their partner-in-crime yorkie, Major. She is represented by Victoria Marini of Irene Goodman Literary. 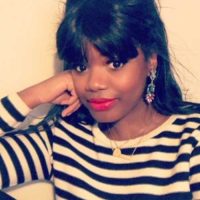 Born in a small town in the south of England, Ciannon Smart can typically be found painting abstract canvases, playing netball, or teaching herself new scores on the piano. She’s a 2017 Pitch Wars alum; her passion for writing and reading comes in handy in her part-time career working with high schools as an Educational Consultant. A lover of the fantasy genre in particular, her debut YA fantasy novel WITCHES STEEPED IN GOLD will be out early 2021 from Harper Teen US, and Hot Key Books UK. She’s represented by Taylor Haggerty of Root Literary.

The park was busier than normal that evening, multiple families and couples loitering throughout the serene area. The sound of ducks quacking on the lake was intertwined with giggling children on the nearby playground, their squeals of delight drifting around the adults who watched them with amused faces. [Dee: I’d suggest opening with the MC instead of the park imagery. Hone in on your character and what she’s doing. Then describe her surroundings and her actions from her POV as the story progresses]

It was a peaceful sight, one that Teagan usually enjoyed.

But not lately. In fact, she hadn’t been able to enjoy her favorite park for weeks now; she’d been too sick to enjoy much of anything.

And she didn’t know why. [Ciannon: it’s a little tough to feel grounded at the moment. While we have our setting of the park, Teagan isn’t clear]

A curious dog came up to sniff at her but his owner quickly followed, shooing him off without meeting her gaze. Teagan would have rolled her eyes if she didn’t feel like such an excess use of energy would cause her to faint. [Dee: so far, Teagan isn’t active in this scene, except describing what’s happening around her. These descriptions/explanations can be weaved into the story later. What’s more important is making sure your reader is grounded, and to do that, your character should have agency, which is currently missing from this first page]

Not that she blamed him for his reaction; she looked terrible. Her normal warm, brown skin was a pallid gray and she was running a high fever, had been for weeks. The long sleeve shirts and pants she always now wore covered the sores on her body. But there was nothing she could do about the ones on her face. Concealing them with makeup made them look worse, a lesson she’d learned early on. Her long curly hair was kept braided at all times now but not for style; no, she’d found braids were the only way to disguise how much of her hair had started falling out. [Dee: why does she have sores on her face and body? Why is her hair falling out? Withholding details like this from the reader takes away from the tension and pulls the reader away from the story because there are too many questions left unanswered. Ciannon: there’s also a lot of telling happening rather than showing – the people in the park, do they give her second glances? Is she rubbing her arms because the sores hurt? Let readers feel Teagan’s discomfort]

She’d never been ill a day in her life. And yet, a few weeks ago she’d awaken with an annoying ache in her throat. She’d noticed, of course she noticed. But she’d brushed it off, thinking her body would get over it.

It didn’t. [Dee: The voice is great, but I don’t think this is where the story really starts. As a reader, I don’t know anything about Teagan other than the fact that she’s at a park, and she’s currently ill, which makes the first page a little too vague. I’d suggest starting with a scene that implements Teagan’s goal and motivation. What is your character doing? What does she want, and why does she want it? How does she plan to get it? What will happen to her if she fails/succeeds? This creates a sense of immediacy and makes the reader eager to follow along in your character’s journey. Ciannon: agreed! Teagan’s voice promises a strong narrative ahead. But while it begins on a typical day in the character’s life, and it seems like things are changing, there are a few unanswered questions that limit the clarity of the status quo somewhat.]

Thank you, Deborah & Ciannon, for the critique! We are showcasing three mentor critiques each day leading up to the Pitch Wars 2019 submission window, so make sure to read the other two critiques for today and come back tomorrow for more.