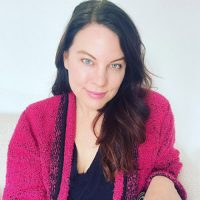 Heather Herrman’s fiction blends beauty and the macabre. Her obsession with horror began with a sixth-grade slumber-party viewing of Night of the Demons. She loves prairie winds, tales of wicked women, and landscapes that look like they could eat you. Her debut horror novel, Consumption, is available through Random House/Hydra. She holds an MFA in fiction from New Mexico State University and is an active member of The Horror Writer’s Association. Her work has received support from The Prague Writer’s Program and The Nebraska Arts Council. Heather currently lives in Santa Fe, New Mexico. 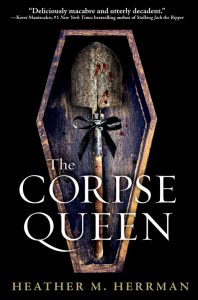 In this dark and twisty feminist historical mystery, a teenage girl starts a new life as a grave robber but quickly becomes entangled in a murderer’s plans.

Soon after her best friend Kitty mysteriously dies, orphaned seventeen-year-old Molly Green is sent away to live with her “aunt.” With no relations that she knows of, Molly assumes she has been sold as a maid for the price of an extra donation in the church orphanage’s coffers. Such a thing is not unheard of. There are only so many options for an unmarried girl in 1850s Philadelphia. Only, when Molly arrives, she discovers her aunt is very much real, exceedingly wealthy, and with secrets of her own. Secrets and wealth she intends to share—for a price.

Molly’s estranged aunt Ava, has built her empire by robbing graves and selling the corpses to medical students who need bodies to practice surgical procedures. And she wants Molly to help her procure the corpses. As Molly learns her aunt’s trade in the dead of night and explores the mansion by day, she is both horrified and deeply intrigued by the anatomy lessons held at the old church on her aunt’s property. Enigmatic Doctor LaValle’s lessons are a heady mixture of knowledge and power and Molly has never wanted anything more than to join his male-only group of students. But the cost of inclusion is steep and with a murderer loose in the city, the pursuit of power and opportunity becomes a deadly dance.

[Hi! First, thank you so much for entrusting me with your work for this critique. I’ve been on the receiving end of many myself and know they can be scary. Critiques, by nature, often focus on what needs changed instead of what’s working, so let me start by saying THERE IS SO MUCH TO LOVE IN YOUR PITCH! I’ll be picking it apart just to make it better, but please know that I am intrigued with and excited by what you’re bringing to the table. You seem to be a writer after my own heart, which means you’re working with very big ideas and lots of characters. To make this pitch more accessible, we’re going to work on FOCUSING and SIMPLIFYING]

[Right off the bat you’re hitting your reader with a lot of info/characters. I’m immediately concerned about POV and who our “guide” is going to be through this story. Is this alternating close third POV’s between the two older sisters? Third person omniscient? While multiple POV’s can be great, they can also be challenging, and you have to make sure the story warrants them. Just something to think about/clarify for your pitch. Either way telling us about two characters in the first two sentences and then describing them is too much too soon. We don’t need to know everything about your characters before we even know why we care about them. Focus on a “hook,” as in the standard pitch formula: the hook, the book, the cook. You just need your reader to be intrigued enough to ask for the whole manuscript. WHAT IS THE MOST EXCITING DETAIL YOU COULD PUT HERE?!?! Hint: Tell us about the key! That’s your hook. See paragraph below where I’ve marked a sentence you might tweak to use as your opener.] [BOOK TITLE] is a young adult gothic romantic fantasy at 94,000 words [Subjective, but that’s a little on the long side for a debut. Would be good to think about getting that down to around 80 or 85 if you can] that explores love and loss [too generic, I’d cut], the bonds of sisterhood, and questions whether time does in fact heal all wounds. It stands in tradition with books such as Down Comes the Night, Mexican Gothic, and House of Salt and Sorrows. [great comps!]

Now orphaned, steadfast Maeve and bitter Salem become the protectors of their two younger sisters——[we don’t need to know more names here, it just muddles the information and gives us too many characters to sort through] and a small bronze key that, on her deathbed, their mother made Maeve swear to keep hidden and safe. As their circumstances become dire, the sisters receive a letter from an estranged uncle, who opens his home to them.

Out of options, the sisters begin the journey to their new home. But Holt House is not what the sisters expect, and it isn’t even their uncle’s home. It is the home of Lord Thornton and his two children. When Maeve and Salem realize that the Lord is after the bronze key, they must do everything they can to keep it out of his hands and uncover the secrets at play between the two families. [Why? Set up the stakes here. Will the Lord kill them? Will he use the magic of the key to destroy their family and the world? Is he after its power? Also, end the summary here b/c you’ve done a good job of making the reader want to know more]

In addition to writing [BOOK TITLE], I am a mother of four adventurous sisters who inspired this story. Being one of five daughters, I have had my fair share of sister adventures as well [Can you simplify and combine these two sentences? Avoid using adventures and adventurous so close together. Repetitive]—badass women run in my family[love this!]. Most of my writing experience centers around the mind; I [hold] a master’s degree in Clinical Psychology[great job establishing cred], and [have written] a handful of peer-reviewed research paperspublished in various [for various] psychology journals. I’ve always felt a connection with family dynamics and resiliency in adolescents, and this story takes those academic interests and combines them with my love of creepy old houses, magic, and my experience with girls who run the world [Great line!].

It was bad luck burying someone during a storm [I really like this first line but wonder if you could punch up its impact in the next few paragraphs so we can read this as foreshadowing and get an idea of what kind of bad luck the sisters’ can expect.]

High up on the cliffs, Maeve stood with her sisters in a semi-circle, the wild weather blowing their skirts, snatching at their shawls, whipping their hair into their tearful eyes. As still as four statues, they ignored the angry wind and the roiling clouds, keeping their eyes locked on the wooden casket at their feet [great description and atmosphere], waiting for it to be lowered into the gaping hole below [don’t need. Nowhere else it could be] as the Kolgrim daughters said a last goodbye to their mother [nice].

[You use Maeve as our anchor at the beginning, which is good. Can you zoom in here to give us some of her thoughts and feelings? Ground us in the personal so we can feel the weight of this scene. Also, maybe this is a good place to bring in the key? Can Maeve be holding in her hand or thinking about how it used to be always around her mother’s neck but that neck is now bare as it is being lowered into the ground? A tiny mystery to foreshadow the adventure ahead of us and keep us reading].

The insignificant cemetery stood behind the small chapel, haphazard rows of headstones sticking out of the ground like mushrooms after a rainstorm. Most of them were covered in lichen, but a few were so old they were crumbling, chunks missing from the corners, the names difficult to read.

The graveyard, belying its small size, remained a significant part of the small town, many of the residents of Monthaven having been buried in the cemetery and attending the church during their lifetimes. Living so close to the Gray Cliffs provided breathtaking scenery, but a hard life. The wind was the greatest peril, whipping wildly, spooking sheep and cattle, luring many a person to their unfortunate end over the cliff’s edge. It was a wonder any of the grave markers were still standing, what with the constant battering they took. [I’d look at condensing the last two paragraphs and connecting specifically to your protagonist. We’re getting a lot of big picture setting, which is good, but I want to know why it matters to Maeve and her sisters].

The priest’s voice was hard to hear over the approaching storm, his words a muffled constant that ebbed and flowed with the wind, adding to the surrealism [surreal for whom? Again, not to harp on POV, but we need to know who this feels strange for and why. Maeve?] of the moment.

Again, thank you for sharing. I really enjoyed reading your pitch, and this story has all the elements of a great read! Good luck!

Thank you, Heather, for the critique! We are showcasing three mentor critiques each day leading up to the Pitch Wars 2021 submission window, so make sure to read the other two critiques for today and come back tomorrow for more.