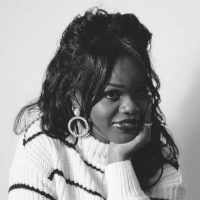 Of Jamaican heritage, Ciannon Smart grew up in a small town in the south-east of England. As the only daughter in a house full of boisterous sons, she developed a voracious appetite for reading from an early age, preferring anarchy in stories rather than real life. In YA she loves her heroines exactly as she loves her villains: wilful, wily, and unpredictable. When not writing, Ciannon can be found reading, painting, or taking the long way home to listen to a good song more than once. 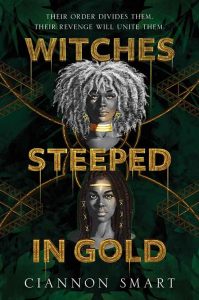 Iraya has spent her life in a cell, but every day brings her closer to freedom—and vengeance.

Jazmyne is the queen’s daughter, but unlike her sister before her, she has no intention of dying to strengthen her mother’s power.

Sworn enemies, these two witches enter a precarious alliance to take down a mutual threat. But revenge is a bloody pursuit, and nothing is certain—except the lengths they will go to win this game.

Deadly, fierce, magnetically addictive: this Jamaican-inspired fantasy debut is a thrilling journey where dangerous magic reigns supreme and betrayal lurks beneath every word.

Sixteen-year-old Jada gifted her only train ticket out of drought-devastated Salt City to her brother. Now she must snatch water from drones and doge desperate thieves until she too can escape. [Intriguing world building! However, to keep the query focused on Jada I suggest rephrasing this along the lines of, “Stranded in the drought-devastated Salt City, sixteen-year-old Jada has X days/months to escape” rather than focusing on her brother. The latter doesn’t foster a sense of immediacy/tension the world suggests, and in the grand scheme of what happens in the next paragraph, doesn’t seem *that* important]

[The plot outlines in this paragraph feels quite rich; while it bodes well for your manuscript, it does make it difficult to discern a clear arc in this query letter. The first paragraph establishes that Jada wants to escape – perhaps instead it’s about survival in the beginning with an eventual escape, but the discovery of the supervolcano makes escape necessary instead, thus heightening the stakes and establishing a clear plot; in contracting a fever, Jada’s survival becomes tenuous, and the looming disaster compounds that worry.] When Jada steals a drone carrying a coded message meant only for the rich families on Capitol Hill, she is hunted down by their enforcers. Cornered and struck down by a sudden fever, [Suggest that the sentence before this is cut, and “when struck down by a sudden fever” is inserted here as a new opener.] Jada is forced to accept help from [her friend? What’s his relationship to her?] reliable, spiky-haired Isaac. [Suggested insert, “In search of medicine, they steal a drone only to discover something else: news of a looming supervolcano eruption”] Jada and Isaac decode the message which brings news of a looming supervolcano eruption [delete line before full stop]. Earthquakes tremble the city while Jada’s fever increases. Her fever reveals Jada to be a Trace, a person with the ability to manipulate one of the four elements. Jada must learn to control her Trace and trust Isaac, before a volcanic winter blankets Salt City and prevents her from ever seeing her brother again. [The reveal of the Trace feels a little random/incongruous without any prior foreshadowing. I didn’t guess that the world had magical people in it until reading this line. Perhaps when they steal the drone, the supervolcano is attributed to a person? That way readers/agents start to put two and two together and aren’t so blindsided by this reveal]

At 73,000 words, TITLE is a YA Fantasy novel with survival elements similar to Partials by Dan Wells and filled with the consequences of climate change comparable to Dry by Neal and Jarrod Shusterman. I hope you find TITLE to be a good fit for your climate crisis wish list.

My poetry has been published in several literary magazines, including The Sugar House Review and Matter Press. I earned an MFA in Creative Writing from NAME University. I’ve worked as a middle school teacher and librarian in CITY for eighteen years and strive to reflect the diversity of my students in the characters I write.

[I love third person POV; in the beginning especially, it provides lots of space to establish your opening with a bird’s eye view. As close third as this opening is, there are a few grounding details missing to place the reader. Is she in a town or a city? Is it night or day? Is everyone standing still on the ledge or climbing it? Help the reader to see beyond what Jada is doing] Jada crouched, her thighs tense. Her fellow snatchers lined the crumbled window ledges on the old bank building. Some kids were too small to complete the climb, including the boy with long stringy arms and short legs on the ledge next to Jada’s. The kid [,Arms,] couldn’t be more than ten. She expected him to fall and crack his bones on the cement five stories below.

Jada wiped sweat from the back of her neck. She couldn’t worry about Arms. To survive as a snatcher [second mention of this world building term, but I’m still confused as to what it is/what’s going on], she had to take care of herself. Latching onto the carved swirl of moulding, Jada hauled herself up.

“Get ready,” Eagle [This is the third name. I’d suggest cutting one of them to keep the opening clear. As it stands, I’m not entirely sure what’s happening] yelled from the roof. He lifted his arms and a chill rolled up Jada’s spine. It always happened when Eagle used his Trace [another world building term that’s difficult to understand. Could you show us what the Trace is?]. The tall teenager’s dark hair blew around his face.

Jada rolled her eyes. She knew better than to be impressed. [Jada’s character has a wonderfully clear voice]

Jada flung her net to the roof, gripped the brick rim, and threw one leg over the side. She rose on trembling legs. Checking her sore hands for cracked skin, Jada claimed a spot closest to the edge. Snatchers of all ages spread themselves out across the roof.

The bank was so high, Jada easily made out a freeway sign, tilting sideways and announcing the exit for Salt City. Someone had crossed out the ‘Lake’ in Salt Lake City with blue spray paint. No one called it that anymore. In Jada’s sixteen years, she’d never seen a puddle of water out on the salt-crusted flats, let alone a lake.

Heat beat down on Jada’s shaved head. She wiped the salty sweat from her forehead with her shirt collar and cursed herself for leaving the bandana behind. She’d climbed most of the taller buildings in Salt City, but dehydration and hunger dragged her down today. [This is wonderful description; it could be moved up earlier – especially since it clarifies that she was climbing, and it provides the sensory language missing in the beginning]

All in all, your premise is intriguing, and you have a wonderfully complex world. To give readers the best chance of settling in, however, they need more details to ground them in the beginning, ones that will draw them in to the setting and atmosphere without confusing them with extraneous characters and unexplained world building terms. What is Jada doing – tell us, and then show us how, where she does it.

Thank you, Ciannon, for the critique! We are showcasing three mentor critiques each day leading up to the Pitch Wars 2020 submission window, so make sure to read the other two critiques for today and come back tomorrow for more.