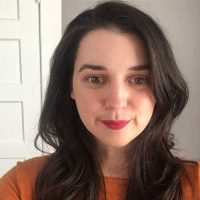 Kylie Schachte works as a tutor and mentor to high school students, teaching everything from creative writing to archaeology. She was a Pitch Wars 2017 mentee, and her YA mystery YOU’RE NEXT will be published with Jimmy Patterson Books in 2020. Kylie lived in nine different cities–from Moscow to Los Angeles–before moving to Portland, Oregon, which she now calls home. When she’s not writing, Kylie can be found going to concerts, hiking around the Pacific Northwest, and refereeing between her tiny cat, Matilda, and giant dog, Clementine (the cat always wins). 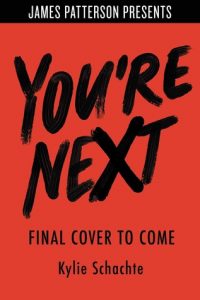 Add it to Goodreads!
A Riverdale meets Fight Club YA Noir coming June 2020!

Flora Calhoun has a reputation for sticking her nose where it doesn’t belong. After stumbling across a classmate’s body years ago, the trauma of that discovery and the police’s failure to find the killer has haunted her ever since. When she gets a midnight text from Ava McQueen–the beautiful girl who ignited Flora’s heart long ago, then never spoke to her again–she knows she has to help her.

But when Flora arrives just in time to witness Ava’s death from a gunshot wound, she is set on a path of rage and vengeance for all the dead girls whose killers are never found. Her tunnel-visioned sleuthing begins to unveil a shocking conspiracy involving her entire school, but also earns her sinister threats. She has a choice: to give up the hunt for answers, or keep digging and risk her loved ones’ lives. Either way, Flora will regret the consequences. But who else will she lose on her path to redemption?

Look at all these animals. Human animals. [What are we looking at here? What prompts the character to think this? It’s okay to start with some internal monologue, but the main character seems to be commenting on something they’re observing, only I can’t see it. I would love to be in their head and see what they see] It’s hard to believe we’re the most advanced civilization in history. But if we’re so smart, why haven’t we fixed Earth yet? Just thinking about it makes me nervous [On its own, nothing wrong with this sentence, but we’re really deep into this character’s internal thoughts in this paragraph. It might break things up a bit to show that they’re nervous with something physical, like wiping their sweaty palms on their pants (just a random suggestion). That way this sentence can do double duty: it shows us how the MC is feeling, but it also helps to ground us in the physical reality of the scene. Right now, I’m having a hard time picturing what’s going on in the literal, physical world around them, because we’re so deep in the character’s thoughts]. I pass the feeling off as hope [Not sure what this means. Are they trying to convince themselves that their nerves are really hope, or are they trying to appear hopeful to the outside observer? Are there other ways you could show these feelings? If they’re trying to convince themselves, maybe they latch onto a hopeful thought, or image—like imagining what their life will be like on the moon (I think that’s where we’re going, from reading ahead). If they’re trying to appear hopeful, how could you show that physically?] and stride to keep up with my row of cycle 16 classmates. My open toes [Are they barefoot? If so, I would just say that] grip the crevices between the aged cobblestones as I take my place with angst [What does it look like to “take my place with angst”? Having a hard time picturing this one. Or is more about their internal thoughts? If so, I would let us hear the thoughts rather than just telling us they’re angsty] and wait for the ceremony to begin. Today, we gather at the center of the colony to find out if we can leave the Moon.

[You might consider spending some time here describing what the world around the MC looks like. Are they standing in a big crowd? Reading ahead, it sounds like there’s a ton of people around, but I didn’t know that until I got there. There’s a lot of sensory stuff you can do with that—are they crowded together? Stepping on people’s feet? How does a crowd that large smell? Are people talking amongst themselves? Is everyone else nervous like our MC, or are they excited to go to the moon? Those emotions can really shape the dynamic of a crowd. I’d also love a few details about where they are. I know they’re walking on cobblestones, what’s around them? Does the MC live in this place, is it familiar to them? I don’t need all of this information up front, but a few key details can help the reader start to form a picture in their head. When I don’t know what to visualize, it’s harder for me to pay attention to what’s going on because I’m grasping for clues about what the walls, the floor, the ceiling look like] I close my eyes and let the brilliant light overhead [When I first read this, I assumed it was the sun, but after reading ahead I think it’s the light orb? You might want to describe it here instead of waiting for the next paragraph, especially since you could use some more setting description up here anyway] tint the backs of my eyelids red. My neck warms and a sharp tingle runs up my spine as energy waves surge through me. My body lightens as I lift away from the stone foundation to witness our most amazing spectacle. Digital waves engulf the entire population, twenty thousand people float like a flowering mosaic [This sounds so cool! I’d love to see more time spent describing it. You’ve got a good start here, but think you can afford a few more sentences since it seems pretty important. What you have above is a good overview of what it looks like, you might want to see where you can add some specifics, like the expressions on other people’s faces, or the wind lifting someone’s hair as they rise, or anything, I’m just throwing random stuff out there.]. The colony aligns with our artificial intelligence system and supercomputer, Direct.

Above us, a towering metallic arch houses our most sacred resource and atop it holds the euphoric orb of light. Direct can synchronize knowledge through the technology in our bodies to fill our personal spaces with sensations from Earth’s natural world; like misty mountaintops, erupting volcanoes, tastes of saltwater, and even smells of wildflowers. We can also explore over three hundred recolonization missions in an instant and share information back and forth with each other as part of our daily routines. All to aid our mission to restore Earth’s atmosphere. [Can you show some of this happening to the MC as they explain it? Rather than give us examples of what Direct can do for instance (ie: misty mountaintops, erupting volcanoes, etc), what sensations is the MC experiencing right now? Are they exploring the recolonization missions? What does that look and feel like? You can still convey a lot of the information about Direct’s potential, but it will feel less expositional if it’s sprinkled through with what’s going on right here, right now]

I feel a nudge on my shoulder from Leif, the boy next to me [This is a little thing, but you could consider combining this sentence and the one that follows so it just says something like “I feel a nudge on my shoulder from Leif, my best friend.” Presumably we’re in Pollo’s internal thoughts, and so it’s a bit strange for him to refer to his best friend as “the boy next to me,” it makes it sound like he’s talking to a stranger, which can jar the reader out of the book]. If I could call someone my best friend, it would be Leif. “Pollo, you’re out of alignment,” he says, pushing me a message. [What does out of alignment look like? When Leif snaps Pollo out of it, does Pollo look around and realize what they’re doing wrong? It could be a good way to clue the reader in to some of the mechanics of what they’re doing here.]

[You have so many compelling and FUN things to play with here! I know I left a lot of comments above, but they all really boil down to the same thing: grounding the reader in the physical reality of this world. Especially when it comes to sci-fi and fantasy, when a reader opens a new book they are staring into a brand new universe, which could really be anything! They don’t know yet how similar this new universe is to our own, or if there’s going to be something completely different that they’ve never imagined before. It’s kind of a blank white void at first, and the trick for the author is to sketch in critical details so that everyone sort of basically knows where they’re standing, BUT at the same time, not give so much away that it reads as an “info dump.” It’s a difficult trick to pull off! I tend to think of it like this: in the first chapter, the author’s job is to give the reader just enough information so that they A) know basically what they’re looking at. If they can’t picture the scene, it’s hard to get engaged. And B) Are INTRIGUED enough to read further. So for instance, in your first page I don’t really need to know exactly what Direct is, or how it works, or why these people are trying to get to the moon. You can parcel that out over time. But I do want to be able to imagine the basics of the scene (who our main players are, what they’re doing, and where they’re doing it) and I’d like juuuust a few details to get me excited to read more (a few more juicy images or descriptions of the setting can do this, and I love the image of the whole population floating together in this kind of undulating mosaic).

Good luck, and thank you so much for trusting me with your pages!

Thank you, Kylie, for the critique! We are showcasing three mentor critiques each day leading up to the Pitch Wars 2019 submission window, so make sure to read the other two critiques for today and come back tomorrow for more.