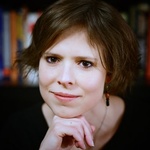 Sam Taylor grew up in Arizona’s deserts and now lives among Connecticut’s trees. She spends her days writing, being mom to the world’s cutest baby, whirling through dance workouts, and baking too many cakes. She does not possess fire magic, but does have one fire-colored cat.

Oksana and Pran weren’t born fire-breathing monsters. But the Vesimaan Empire kidnapped them. Transformed them. Demonized them.

​Now spitting flames and with eyes stained black, they are forced into the army. They must burn anyone who opposes the empire … or be incinerated themselves. Their only comforts are the kisses they steal in shadows as they dream of a life together in freedom.

After a troop of fellow soldiers escapes the copper fortress, Pran and Oksana vow to take action. Oksana is hellbent on disbanding the army and returning home. But Pran is determined to become the army’s new master—by any means necessary—and destroy the empire.

​In this land of ashen-gray morals, the more Pran and Oksana chase the murky paths to freedom, the more they torch their ties to each other.

LITTLE STAR, BRIGHTLY BURNING is an 85,000 word NA fantasy for fans of WESTWORLD, THE 100, and interested in gay HUNGER GAMES. [You have my attention! … Though after reading the whole query, I’m not sure how the gay HUNGER GAMES comes into play. Be very clear about that in the query itself, so readers can envision the story that pairs with these awesome comps!]

Nova Kennedy’s family died when she was eight years old. Now, twelve years later, she finds a home with the Raiders, a nomadic group of fighters who live off the land and steal what they can’t scavenge. They took her in, protected her, and taught her strength. Her only goal is to become a true member of the tribe [Avoid appropriative language. Instead of tribe, how about group, crew, or their name, Raiders]–a life-bringer. [I definitely get the gist of Nova’s background from this setup, but I feel her Story Goal could be established more strongly to hook readers’ interest and help them connect to Nova: What does becoming a life-bringer mean, personally, to her? What will she lose if she doesn’tbecome a life-bringer, or a true Raider?]

To do that, she must capture an outsider and make them a Raider. When she sees the handsome man alone in the grasslands, she knows this is her chance. But Krew is not a normal stranger. The other Raiders fear him, though Nova doesn’t understand why, and will not permit him to join their ranks. [This could benefit from more detail. The Raiders seem a hardy bunch, so I’m very curious what kind of a person Krew must be to scare these folks! Give us a vivid, specific detail or two about Krew so readers get a sense for who he is—and most importantly, want to know him better!] Instead, they demand Nova remove him from their presence or face banishment. With the help of their fiercest warrior, Thoa the Bonecutter [This name is AWESOME! This is a character I want to meet. That said, she’s never mentioned again in the query, so I’m not sure what’s her role is in this story, or whether she *needs* to be mentioned, alas], she must take Krew to the City of Trials. [Needs a bit more setup here. I’m confused why they have to take Krew to this city, why the Raiders don’t just chase Krew away if they don’t want him around. Above all, how does this turn of events play into or complicate Nova’s own Story Goal? Everything in this query must point back to that.]

Thank you for your time and dedication to helping authors.

Thank you, Sam, for the critique! We are showcasing three mentor critiques each day leading up to the Pitch Wars 2019 submission window, so make sure to read the other two critiques for today and come back tomorrow for more.