USA TODAY bestselling author Melissa West writes heartfelt Southern romance and teen sci-fi romance, all with lots of kissing. Because who doesn’t like kissing? She lives outside of Atlanta, GA with her husband and two daughters and spends most of her time writing, reading, or fueling her coffee addiction. 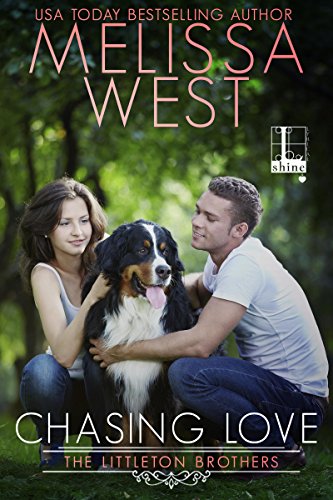 There aren’t many things Charlie Littleton values more than his lifelong friendship with his buddy Lucas, currently home from a tour in Iraq. But when he discovers that Lucas’s younger sister, Lila, is back to assist the town’s overburdened veterinarian, Charlie is torn. She’s no longer the skinny, awkward kid he remembers, but a gorgeous woman—one Lucas would never approve of him dating. When Lucas asks him to

EKKO LAVENDER wakes up alone in a hospital bed. [Intriguing!] She thinks the man she’s in love with—also her professor and married to a famous author—is with her. [Is the author Ekko’s favorite author?] But he’s not, neither is anyone else. [Redundant, since the opening tells us she’s alone.] Then she recalls the chain of events that brought her there. [Is the story told in reverse, where she wakes in rehab, and then you slowly unravel what happened to get her there?]

Melodramatic Love Confusion [Typically, the title is in all caps in a query. MELODRAMATIC LOVE CONFUSION] is a new adult novel complete at 92,000 words about a New York college student sinking in depression as one relationship pushes her to confront her troubled past. [I would move this to the end of the query, right before your education/experience.]

When Ekko meets LANGSTON FOSTER, she thinks their new romance is meant to be with their shared love of writing. Ekko soon finds out Langston is married to ANGELIQUE GRIFFIN, the best-selling author of paranormal romance. Langston convinces Ekko the marriage is dead, legally binding for appearances as he and Angelique ignite the Harlem Renaissance 2.0 arts movement. [For me, this paragraph is where your query really begins, but we don’t see a clear picture of who Ekko is as a character—age, interests, etc—or get a sense of her voice. What’s the conflict of the story? That Langston is married and her professor? I think you should dive deeper and layer in more of the story’s conflict here. Also, cheating can be very problematic for many readers, so consider ways to make the agent/editor sympathize with Ekko and how she landed herself in this situation. Is this a romance with an HEA or is Langston toxic and the story is more of Ekko’s journey through a toxic relationship?]

Not only is Langston charming but unstable. Ekko excuses the mood swings because she too is unstable. As her friends continue to be absorbed by other outlets, she finds Langston as her only outlet to soothe the loneliness. Until the one person from her past who created the instability returns: her mother. [You could cut this paragraph, as the query is running a bit long now, and I don’t think it contributes to the central conflict of the story. The main goal of your query is to hook the agent/editor enough so she/he reads your pages. So don’t feel like you need to detail the entire story. Focus on character and conflict/problem.]

Reconciling the past with the present becomes Ekko’s mission until her world explodes and lands her in rehab. [I really like this line, but why is she in rehab? Depression?]

Melodramatic Love Confusion shows a character aware of her depression but unaware of its wrath. With mental health an alarming issue on university campuses today, this novel explores how being away from home doesn’t make it too far away. [This is a great place to move the 2nd paragraph—word count, etc. “MELODRAMATIC LOVE CONFUSION is a new adult novel complete at…” Then the rest of that paragraph. You can cut the first sentence of this paragraph and keep, “With mental health…”]

This is my first novel. I recently completed a writing workshop with young adult novelist Francesca Lia Block. I’m currently working on a young adult novel about a 16-year-old girl hiding her secret job as a mermaid at a Chicago nightclub. [I would cut this and focus this query on MELODRAMATIC.] I have a master’s degree in journalism and work as an editor at a daily newspaper. Per your submission guidelines, below you’ll find the first 10 pages. [MELODRAMATIC sounds intriguing! I absolutely love the idea of a new adult story that focuses on the struggles of being away from home and how depression can set in as the character tries to find herself in a new environment. I’d read this in a heartbeat!]

Kristen Lepionka is the author of The Last Place You Look, forthcoming in Spring 2017 from St. Martin’s/Minotaur Books. She grew up mostly in a public library and could often be found in the adult mystery section well before she was out of middle school. Her writing has been selected for Shotgun Honey, McSweeney’s Internet Tendency, Grift, and Black Elephant. She lives in Columbus, Ohio, with her partner and two cats. She is represented by Jill Marsal of Marsal Lyon Literary Agency. The Last Place You Look

Since her cop father died in the line of duty, private investigator Roxane Weary’s only active investigation is the bottom shelf of her liquor cabinet. When she becomes a death row inmate’s last shot at proving his innocence, she uncovers a string of missing teenaged girls and a tangle of secrets in a quiet Midwestern suburb. More >

In some weird world, torment and love are two in the same. Twins separated at birth ready to blow up your heart, stomp on it, or jam a knife into its last beating moment. Only somehow love renamed itself as the sadistic man who tore my world in two. [You might want to open with something more concrete—show, don’t tell!]

Whose ridiculous, burnt oak scent lingered on the edges of my favorite plaid scarf. The one part of my ensemble [this is confusing because we don’t know what her ‘ensemble’ is yet…consider reworking the opening few paragraphs to start with the image of her stuck in the grate (see additional note below)] representing me, Mae, the girl who escaped the country, ran off to the city with a fool’s hope of finding my dreams and a man. A rich handsome bastard that would dress me up in clothes I couldn’t pronounce [ha!] and treat me like the lady every Mama expected.

I ripped off my scarf and crushed it in my fist. Its frayed edges whipped by the night winds barreling down the city streets [this is a fragment]. “Damn you, Willis Evermore.” I kicked at the metal grate on the ground beneath my feet. The spike of my leather, Goth, heel sunk into one of the tiny grooves. [This is a really strong image—this could be a good place to start to ground us in the scene.]

“Really?” After tonight… what the hell did I do to deserve this?

I wiggled my heel, the leathered spike scuffed, the hundred-dollar-eight-inch-spike wedged further into the grate. Three kids dressed as ghosts ran down the sidewalk, and stopped at the house to my left. Their excited giggles and trick or treats overshadowed by their parents, wide-eyed, stares, scrolling over me, [watch the commas in this sentence—makes it a bit hard to follow] exploring the bare skin beneath my fishnet stockings, the studded skintight pleather mini [a few too many modifiers in a row, maybe rephrase] skirt, see through shirt, and black bralette. [nice description]

Why did I agree to this costume? The short electric, blue, blunt, [this can be blunt-cut, no comma] cut wig that itched like crazy and scarlet red lips. [This could also help setting the scene earlier on.]. It did nothing for me… nothing. I smiled and waved at the parents. Totally normal people, but this version of Mae wasn’t, not by a long shot.

“It’s just pretend Mae,” Willis would say. “It’s only for one night Mae. Don’t you want to please me, so I can please you?”

Fuck you, Willis. [Maybe a beat or two here about why she’d be willing to do something so out of character?]

When did finding someone to care and champion you for being you become this difficult? [This is a bit at odds with the earlier statement that she ran off to the city to find a rich husband. If intentional, consider having her reflect on that contrast] To find out you weren’t good enough, and the bad version of yourself was all he wanted. Hell, finding one guy in this whole city was harder than being a stripper at the caddy shack back home. Even [consider cutting the word “even” – I think it changes the meaning of the sentence to make Mae sound full of herself a la “even someone as great as me wouldn’t have earned a cent”] I wouldn’t have earned a cent by the end of the night if I worked there. Dancing and I… nope.

Shake my ass there… nothing.

Giggle [should this be jiggle?] a boob over there… not even a damn dollar.

Like my track record for finding Mr. Right. Trying to catch someone’s attention in this concrete town turned into being broke and Mr. Right now [awkward phrasing here]. An exotic performance in an extremely public place, which I sucked at, and like every man who can’t get satisfaction at the end of the night after watching a performance [is there another word here to avoid repeating “performance”?], I found myself stuck.

[This is a snappy excerpt with a great voice and intriguing premise. I definitely want to know more about what has led Mae to this moment. The first paragraph would be stronger if you opened with Mae in her costume, stuck in a subway grate, right away. That makes for a vivid, memorable image and will pull a reader in faster than the more philosophical approach. Mae jumps off the page—so let her do that starting with the very first line!]

Thank you, Melissa and Kristen, for your critiques!