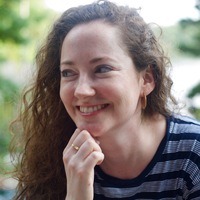 Kelly Quindlen is the author of the young adult novels Late to the Party and Her Name in the Sky. A graduate of Vanderbilt University and a former teacher, Kelly has had the joy of speaking to PFLAG groups and high school GSAs. She currently serves on the leadership board of a non-profit for Catholic parents with LGBT children. She lives in Atlanta. 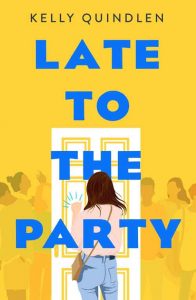 She’s never crashed a party, never stayed out too late. She’s never even been kissed. And it’s not just because she’s gay. It’s because she and her two best friends, Maritza and JaKory, spend more time in her basement watching Netflix than engaging with the outside world.

So when Maritza and JaKory suggest crashing a party, Codi is highly skeptical. Those parties aren’t for kids like them. They’re for cool kids. Straight kids.

But then Codi stumbles upon one of those cool kids, Ricky, kissing another boy in the dark, and an unexpected friendship is formed. In return for never talking about that kiss, Ricky takes Codi under his wing and draws her into a wild summer filled with late nights, new experiences, and one really cute girl named Lydia. The only problem? Codi never tells Maritza or JaKory about any of it.

From author Kelly Quindlen comes a poignant and deeply relatable story about friendship, self-acceptance, what it means to be a Real Teenager. Late to the Party is an ode to late bloomers and wallflowers everywhere.

Chapter One – The Darkness

The darkness is back. This time I’m sure of it. [does this mean the speaker was not sure of it before? Will we find out about that time?] Kayla’s only five and unable to cast a shadow that big. It stretches behind her like a long, flowing gown and creeps up the wall until it touches the ceiling. I know what it means and I’m freaking out.

I hate that she doesn’t see the darkness swirling about her, inching closer, tightening its grip. No one sees it but me. Mom thinks I’m making it up just to torment my little sister and tells me to knock it off [When? In that moment? Or in general? Is this an ongoing pattern with the speaker, to see the darkness and have their family ignore them?]. Dad agrees with Mom because it’s his go-to move and anything more would require effort on his part. I almost convinced myself that it’s not real, that it’s all in my head. But I know that’s not true. [How do they know? Can we have a specific point of evidence?]

It can’t be [See above about specific evidence. Right now it feels like your character is being a little coy.]

“I’m going to play outside.”

It’s not a question. Nothing Kayla ever says is a question. [I love this character description.] I envy her baseless confidence, her sweet arrogance. She can say whatever’s on her mind and get away with it. She could probably get away with murder.

I wish I could. [I find this confusing. The speaker is ‘freaking out’ because death is close, but here they imply that they wish they could murder someone?]

Kayla turns away from me, the flared ends of her bright yellow sundress gliding through the air as she spins. It’s her favorite dress. I should tell her to change into play clothes so she doesn’t get it dirty, but I know she won’t listen to me.

Now we’ll have to find something else to bury her in. [This line is powerful, but it makes me question the speaker’s moral motivation. They sound resigned, passive. Would they not do everything in their power to stop Kayla from going outside, especially if they think that’s where Death is waiting? (See below for more.)]

[General thoughts: I like your main character’s voice. You dive right into it and ground us in the voice right away. The fantastical premise of someone being able to ‘see’ death is also compelling.

I think you can strengthen this opening page by doing the following:

Thank you, Kelly, for the critique! We are showcasing three mentor critiques each day leading up to the Pitch Wars 2019 submission window, so make sure to read the other two critiques for today and come back tomorrow for more.