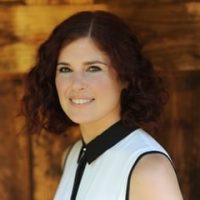 Helene Dunbar is the author of THESE GENTLE WOUNDS (Flux, 2014), WHAT REMAINS (Flux, 2015) and BOOMERANG (Sky Pony 2018). Over the years, she’s worked as a drama critic, journalist, and marketing manager, and has written on topics as diverse as Irish music, court cases, theater, and Native American Indian tribes. She lives in Nashville with her husband and daughter, and exists on a steady diet of readers’ tears. 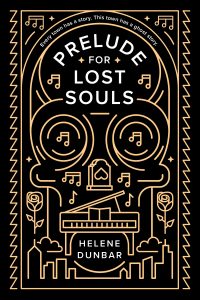 In the town of St. Hilaire, most make their living by talking to the dead. In the summer, the town gates open to tourists seeking answers while all activity is controlled by The Guild, a sinister ruling body that sees everything.

Dec Hampton has lived there his entire life, but ever since his parents died, he’s been done with it. He knows he has to leave before anyone has a chance to stop him.

His best friend Russ won’t be surprised when Dec leaves—but he will be heartbroken. Russ is a good medium, maybe even a great one. He’s made sacrifices for his gift and will do whatever he can to gain entry to The Guild, even embracing dark forces and contacting the most elusive ghost in town.

But when the train of Annie Krylova, the piano prodigy whose music has been Dec’s main source of solace, breaks down outside of town, it sets off an unexpected chain of events. And in St. Hilaire, there are no such things as coincidences.

Sixteen-year-old Yanano “Nhanha” Maraire is a poet who has lost her will to speak. [I love this opening line] She feels stuck as a teenager with a Shona father and a Ndebele mother but having no understanding of either language. She finds English too colonial for her taste. [Is she literally struggling with mutism? And are the language differences of her parents really the cause? What has she spoken for the last sixteen years? You have a lovely opening line but then the reader has to stop and figure out what’s going on. I would save the specific details for your manuscript. Your goal here is to hook the agent/reader and to do that you need to be as clear as possible.]

When she meets seventeen-year-old Taku at a scholarship event [scholarship for???], he invites her to see Triangle (their hometown) in a new light. Over a tumultuous year, [It isn’t impossible but covering this amount of time in a 66K document is difficult] they explore their neighbourhoods and the characters that make up the town. Through this friendship, Nhanha slowly finds a new vocabulary for the grief that sparked her silence. [I think this sets up the interactions and gives a taste of this being a character-driven story, but I can’t quite figure out what the plot is. How does Taku draw her out of her shell? What conflicts do they encounter in the process?]

TITLE is a 66 000 word YA epistolary [I definitely want to know more about this. Is it told in letters? Texts?] novel about friendship in a time of economic and political chaos. It offers a perspective of Zimbabwe’s 2008 hyperinflation era through the lens of family, [delete comma] and music. [Both the historical and musical angles intrigue me. I just think it would help the reader if they were given a firmer grasp on the plot prior to this point.]

[I’m assuming a paragraph has been omitted here, but obviously you’ll want a few sentences about you and your connection to the material.]

[You definitely want to make sure you’re formatting is correct. TNR 12 pt, double spaced with no spacing before/after paragraphs, first line indented, etc. since many agents read on ereaders] Baba keeps talking about the invisible hand that failed our part of the world. [I’m really drawn in by this first line.]He loses me when he gets into acronyms: GDP, IMF, WHO. Technical words might be wasted on me but, I know invisible forces.

I’ve been obsessed with ghosts. [“I am” perhaps rather than “I’ve been” unless you’re going to add “all my life” or something like that.] I thought if I applied my mind, ghosts could be scarier than fire. [Not quite sure what this means. I think you can easily go from “obsessed with ghosts” to the next sentence because her disappointment is clear in the rest of this paragraph.] I’m learning that ghosts aren’t like the pictures in the dog-eared Ghostbusters books we borrowed from the library. Sometimes ghosts are simple. Ordinary. Like being sent to a store to buy bread and finding only empty shelves.

I return to my mother’s kitchen with an empty plastic bag. [Returned from where? Do her parents not live together? If they do, is her father still there? I would actually ask why you’re starting your book with his words, when he isn’t in this scene.]

“There was no bread,” Mama says. She still does this. Saying statements as questions. [Make it clear and put a question mark after “bread” Also maybe it would be clearer if Mama looks at Nhanha’s bag. It took me a couple reads to figure out what Mama’s comment was in relation to.]

She gives me a tight smile then points to the pantry. “Baking powder.”

I drag my feet towards the smell of spices. The table where Mama bakes is an island of green and white patterns. You can fit a lot of air around it. But the walls feel heavy. As if they can not hold the both of us. [There is a very poetic feel to this, which I love. But watch that your comparisons are parallel. The walls feeling heavy wouldn’t connote that they can or can’t hold things up. Perhaps strong? Solid? Or conversely, weak, insubstantial, claustrophobic? Also the description isn’t parallel to the air around the table.]

I return with the baking powder tin and quietly place it on the table. I want to tell her what I saw in the store. The empty shelves, the ghosts, Baba’s invisible hand at its most cruel. But my tongue feels lifeless as if it belongs in a mouth other than my own. [So here is your rational for Baba’s words. I’d just suggest making sure that in opening with her thoughts of him, you aren’t redirecting the reader too many times, too quickly.)

Mama notices my hesitation and says softly, “At some point Nhanha, you’ve got to start speaking again.” [I really want to read further and that’s a very good thing.]

Thank you, Helene, for the critique! We are showcasing three mentor critiques each day leading up to the Pitch Wars 2021 submission window, so make sure to read the other two critiques for today and come back tomorrow for more.