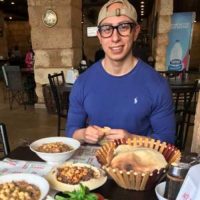 George Jreije is a Lebanese-American middle grade writer obsessed with anime, fantasy, and fart-jokes. His novels reflect that. When not taking deep breaths in a yoga pose, he spends his time reading whatever he can get his hands on and championing diverse authors.

Emma Penny can’t wait to start high school at Whitney Prep [nice opening line]. Armed with [sustainably–sourced] lip gloss[, she is]and an iron-clad [determined] to stay on Team Normal, Emma hopes to shed her past as a spook-spotting freak, even if the ghost trying to catch her eye in Algebra II/Trig is super cute [I love this last line, the voice is perfect!].

But [on] her first day [back] of homeroom, Emma discovers a classmate is possessed by a ghost. As much as she’d like to keep her abilities on the down low, she can’t walk away and leave [them]her classmate to die. Emma enlists the aid of another [I would cut “another” and replace it with an adjective to describe this new friend: quirky, ominous, overachieving] new friend and, with the help of the hottie ghost from Algebra, comes up with a solid plan for exorcism: discover the ghost’s name and cast it out [nicely done here at the end!].

The only way to find the ghost’s name involves [partying]underage drinking, a date with the most popular boy in the [school] sophomore class, and crashing her big sister’s Homecoming afterparty [to avoid repetition, consider replacing “afterparty” with “bash”]. If she’s going to pull it off, Emma’s going to have to stop hiding behind her [A+ average perfect GPA] and apply her smarts to the hardest challenge of all: finding a living date to Homecoming [I LOVE this hook, BUT two points…if you want to reuse homecoming, I would only include it once where you currently have it twice in this paragraph. Two, I include the fact that her classmate will die if she fails to cement the stakes at the end, and also try to work in (up above) why she cares about this classmate. Are they a friend, a crush, anything special?].

TITLE is a YA fantasy complete at 65,000 words and can be described as Buffy the Vampire Slayer meets When You Reach Me by Rebecca Stead. It is a stand-alone book with series potential. I’m sending it for your consideration because of your interest in YA fantasy with spooky twists.

[Thank you] for your [time and] consideration,

[Be sure to include email, phone, and website if you have one]

Did that boy[he] just wink at me?

I glanced over my shoulder again. At the back of the class[, behind the] of eager freshmen overachievers, eager to lap up Mr. Spencer’s introduction to Algebra II/Trig, the boy bent his dark head over his book. Then he did it again, so quickly that I almost missed it—a wink.

I averted my eyes as I could. Okay, he’s winking. Whatever [Rather than italicizing and the “whatever”, you can cement her reaction by showing us how we feels. Did her cheeks flush red due to embarrassment, or did she roll her eyes because she’s annoyed? Something like that].

Don’t get me wrong—it was definitely a new experience for me. Though my exposure with boys was laughably limited, I was all too aware that I was simply not flirtable [Is flirtable a word? I would personally go with “flirty”, but it’s your call!]. I was a scrawny nerd in freshman honors, a well-defined niche in the social hierarchy of high school [love this line!].

And the boy was a ghost.

His dated clothes and haircut set him apart, of course, though his aura wasn’t as obvious as some of the ghosts I’d seen on the el that morning. Old places always had a few ghosts hanging around, and Whitney Prep was nearly as old as Chicago itself.

The boy couldn’t see me. Ghosts never noticed the living. In fact, ghosts didn’t notice much of anything outside the world they’d once known. You could say they were more self-absorbed than a pack of [my sister.]Janelles, which was saying something. My sister Janelle wouldn’t scrape mud from her shoe to benefit another member of the human race unless there was something in it for her. She’d insisted that if anyone at Whit asked, I should deny being her little sister [love this paragraph!].

What Janelle didn’t know was that I’d already resolved to be as perfectly bland and unnoticeable as a [the] second best friend in a romantic comedy. My freak flag was furled. And finding a ghost who wanted to single me out was so, so not on the menu of the Normal Girl.

“Is there an Emma Penny here?”

I jerked out of my reverie, my cheeks flushing. Judging by the nervous laughter spreading through the class, it wasn’t the first time Mr. Spencer had called my name. I raised my hand slightly. “Here,” I muttered, my eyes on the desk.

“Glad you could join us,” Mr. Spencer said, his voice booming.

I scrunched down further into my seat, trying to take up as little space as possible. I hated public attention. It was rarely positive, at least for me. Which is another reason why boring normalcy was my new best friend. No one would know I was a spook-spotting freak.

Except here was a ghost [was here,] sabotaging my plans already, and I hadn’t even made it to homeroom yet. [Nice job, really enjoyed it☺]

Thank you, George, for the critique! We are showcasing three mentor critiques each day leading up to the Pitch Wars 2020 submission window, so make sure to read the other two critiques for today and come back tomorrow for more.