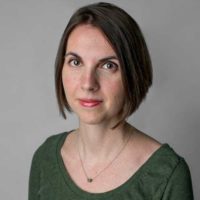 Carrie Callaghan is a historical fiction author living in Maryland with her family. Her debut novel, A Light of Her Own, about 17th century painter Judith Leyster, was published by Amberjack in 2018, and her second, Salt the Snow, is forthcoming in 2020. Her short stories have been published in multiple literary journals around the country, and she is a senior editor with the Washington Independent Review of Books. She loves seasons of all kinds, history, and tea. And books, books, books.

After noting that you ‘devour historical fiction,’ I would like you to consider representing my historical fiction novel Title [put manuscript titles in all caps, not italics. That’s industry convention] complete at 90,133 [Go ahead and round this to say “90,000 words.”] words.

Henry believes that fate – and his broken compass – have led him to her Frances, and happiness looms as they fall in love. But their timing is all wrong, and when war is declared, Henry is called up and later reported missing in action, presumed dead. [The passive voice in this sentence makes your pitch lose a little steam. Is this meant to suggest that the story here will shift to Frances’s perspective? If so, just go ahead and say what Frances is doing, including that she presumes Henry dead. If the story remains in Henry’s perspective, can you write this in a more active voice? I know it’s tough because he didn’t declare war or draft himself, but maybe something like: “But their timing is all wrong. War breaks out, the draft claims Henry, and he gets lost on a mission behind enemy lines. He knows everyone will presume him dead.”]

However, he has been captured by the Germans and is desperate to keep his promise to Frances and himself that his lucky compass will always bring him back to her. But can ithis lucky compass bring him back to her? Has his luck run out, or will he find his way back to his true love once more? [Can you give us a little more sense of the stakes or the antagonist here? What, aside from circumstance, is holding him back? What does Henry have to learn before he can return to Frances? If the story shows Frances’s perspective, what does she have to do to reunite with her love? What are her challenges? This is a great set-up, and I think you can really hook people by deepening the conflict and characters here.]

Title Redacted [put manuscript titles in all caps] is a heart-warming love story about hope, friendship, and family and staying true to yourself regardless of your background. The characters are based on people in my family who lived in Sheffield, England and Poland through the war years. Some of what happens in the story is based on real events. This makes me the perfect person to tell this story. I have already started to write its sequel. [You’ve already proven that you’re the perfect person to tell the story, no need to state it. Show don’t tell, right? 🙂 And many agents will be wary of the idea of a sequel; they’ll want this to be a stand-alone. You can leave that unsaid.]

I see this book sitting on the shelves in bookstores next to similar historical fiction books TITLE will appeal to readers who loved such as Dear Mrs Bird by A J Pearce, The Guernsey Literary and the Potato Peel Pie Society by Mary Ann Shaffer and Annie Barrows and The Solder’s Wife by Margaret Leroy to name just a few.

I am married and have two children: I live in Hertfordshire but I was born in Sheffield. I love to travel. I have lived in Dublin and Perth, Australia. I have an English Literature degree and I work as a Literacy teacher to children with SEN in a secondary school. My passions are reading and writing. I have self-published three books before this one.

If you are interested, I would love to send you the complete manuscript. Thanks so much for your time! I look forward to speaking with you soon.

[Overall, this story seems to be starting in the right place, which is great! And a sweet love story that gets its start in the picturesque English countryside sounds like a winner. I would work on showing that scenery to your reader, immersing the reader, and making the language full and unique. Also note what I said below about incorporating backstory and showing vs telling. Have fun!]

Henry Shepherd was lost, though he didn’t care to admit it. [Could you add a line of physical detail here, to immediately ground us in the scene? Do some showing to balance the telling in these first two sentences. Maybe take the line with the grit under his shoes and move it here, or add something about the sounds he’s hearing or sights he’s seeing.] Somewhere, on the outskirts of Castleton, in the heart of the Peak District, he’d taken a wrong turn – now he was miles from where he needed to be.

The [adjective? Not a requirement, just a thought] hills surrounding him stretched far and wide, with no end in sight [“far and wide, with no end in sight” all kind of says the same thing. I cut “far and”, and you could think about a more meaningful or efficient way to say “no end in sight,” which is kind of a cliché.]. It was a gruelling journey. Shards of broken grit and limestone rubbed underneath the soles of his worn shoes. [This line I love! Great physical detail that places us in his body.] As he scanned the rugged landscape, he cursed under his breath.

He pulled out his compass from his trouser pocket and rubbed his thumb over the glass. ‘Some bloody use this is,’ he muttered, shaking it. It lay flat in his hand like a stone used for skimming across water. “I’ve a good mind to see how far I can lob the bugger.” But as he held it up to the light to examine its intricacies, he decided against it. Despite its imperfections, it was far too beautiful a creation to throw away.[I’d love to see the compass more. The device will be important to the story, and again, you’ll have the chance to put us in Henry’s shoes. What are a few key details about the compass? What do those details say about Henry’s life? Don’t go overboard – just a sentence or two, and some strategically deployed adjectives throughout.]

The sun was fierce [can you think of a more specific way to say this?] on his back. Sweat dripped between the blades of his shoulders. He stopped a couple of times to catch his breath. [Ah, I didn’t have the sense he was still walking. I thought from the above he had stopped to consider his situation. Perhaps show his movement earlier.] His legs ached, but, although tired, he had no other option than to soldier on. As he walked, his mind drifted to times spent in the countryside as a child with his family, his brothers chasing him and the delicious picnics his mum would pack. Henry, when he found the time, came here on his own now. Even though it could be lonely, he needed to escape. He was tired of the grey, suppressive city, with its sulphurous smog. Of late, he was tired of listening to the constant talk of war. Not that it came as a surprise to anyone, the government had already started to build local air-raid shelters and hand out gas masks, along with air-raid handbooks. Of course, nobody wanted it to happen, everyone was still hoping for a peaceful solution, especially as the previous war was still fresh in the minds of the nation, but it was inevitable said his dad, thanks to that ‘bloody Hitler’. Henry and his brother had replied that they were ready to fight for King and country if it came to it. Some of his friends had already started their military training. His mum had given her opinion on the matter, with a quick slap to the back of their heads. He rubbed a sweaty palm over his neck and smiled to himself. He didn’t know who was worse, Hitler or his mum.

[I would be wary of including so much mental wandering and back story in this very early paragraph. Openings are tough – so tough! I think it works best when you carefully layer the backstory and the character’s reminiscences with the present-story-time action. He should only share memories exactly when the reader needs to know them, and he should probably be thinking about how worried he is about being lost. Is he running out of food or water?]