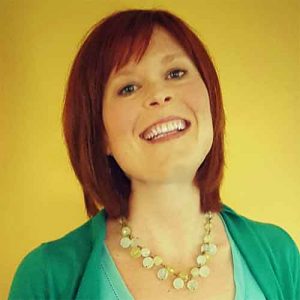 Jessica Bayliss is a fiction author with a Ph.D. in clinical psychology who loves all things reading and writing. Author of the young adult horror novella, BROKEN CHORDS, and her upcoming YA thriller, TEN AFTER CLOSING (Sky Pony Press, September 2018), she has been a lover thrillers and ghost tales since her days scanning VHS rental shelves—admittedly with eyes half-averted from the gory covers. She also loves to eat, cook, and exercise—in that order—and is a firm believer that coffee makes the world a better place.
She has authored thirteen novels and several short stories that appear in anthologies such as BEWARE THE LITTLE WHITE RABBIT, FRIGHT BEFORE CHRISTMAS, and ZOMBIE CHUNKS and in such literary magazines as Sanitarium Magazine. Jessica is a Senior Editor for Allegory Magazine. 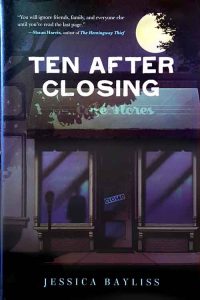 10PM: Closing time at Café Flores. The door should be locked, but it isn’t, Scott Bradley and Winsome Sommervil are about to become hostages.

TEN MINUTES BEFORE CLOSING: Scott’s girlfriend breaks up with him in the café’s basement storeroom because he’s late picking her up for the big end-of-the-year party. Now he can’t go to the party, but he can’t go home, either–not knowing his dad will still be in a drunken rage. Meanwhile, Winny wanted one night to let loose, away from her mother’s crushing expectations. Instead, she’s stranded at the café after her best friend ditches her in a misguided attempt at matchmaking.

TEN MINUTES AFTER CLOSING: The first gunshot is fired. Someone’s dead. And if Winny, Scott, and the rest of the hostages don’t come up with a plan soon, they may not live to see morning.

Told from both Winny and Scott’s perspectives, and alternating between the events leading up to and following the hold-up, Ten After Closing is an explosive story of teens wrestling with their own challenges, thrown into circumstances that will test their very limits.

A Flight of Dragonflies

Unequivocally: without a doubt (and you better believe it)

Hazel Faye London was a smart cookie, her mother always told her so. Hazel knew pretty much everything about everything, even if her Aunt Juniper told her otherwise on a daily basis. She knew about spiders that don’t spin webs, but instead, hide silently in holes in the ground, waiting to pounce on unsuspecting bunnies or moles passing by; she knew about toads in Australia that can make you sick if you lick them (although why anyone would decidethey wanted tolick a toad was beyond her) [I suggested that edit just to tighten the prose here.]; and she knew that dinosaurs had gone extinct 65 million years ago. [Just a little copy edit note: I notice you have an extra space between your paragraphs. Be sure to remove those in your document before submitting.]

She had learned about dinosaurs from a documentary—her dad thought she was still too young to watch any of the movies about dinosaurs—her science teacher had confirmed what she learned and her dad had reconfirmed it. [A copy edit note: You want hyphens, not dashes. And I’m unclear on what it was that her teacher and dad had confirmed. Because you mention that Hazel learned about dinosaurs from a documentary and then tell us that her dad thought she was too young to watch movies about them, I’m not sure which of those two things you’re referring to. i.e., Did her teacher confirm that she was too young?]But now Hazel suspected they had been wrong, that what they had told [Hm. You never actually told us what they told her about dinosaurs.]her might not actually be one hundred percent true, because at this very moment Hazel was watching a baby velociraptor nose its way through her Aunt Juniper’s flower beds. And Hazel was worried about how Aunt Juniper might react. [Haha! I love this. I’m already immensely curious about Aunt Juniper, too. I might even enjoy reading Hazel’s speculation about HOW Aunt Juniper might react.]

But we’re jumping into the story a bit too far ahead. Let’s go back a little and start closer to the beginning of this part of Hazel’s life.

My biggest bit of feedback is that I’d start us off with Hazel watching the baby velociraptor in Aunt Juniper’s garden. Instead of giving us Hazel’s credentials (so to speak) first, give us the dinosaur first and her credentials after. It’s a great hook!

You end this passage by directing us to a point earlier in the story. I’m not sure if that’s a wise choice for a first chapter, especially this early in the book. I’d prefer if you kept us in THIS scene—I’m not ready to leave it yet! It’s too fun. Paint a clear picture of what’s happening with Hazel on this day when she sees the dinosaur. Set the scene for us. Where is Hazel, exactly (bedroom looking out a window? Standing in the back yard?)? What time of day is it? What is she doing while she’s watching the raptor? I’d like to know what the dinosaur looks like, what kind of flowers it’s romping about in … etc.

In beefing up that scene, I wouldn’t ignore the opportunity to show us Hazel’s REACTION to seeing the dinosaur. You’ve employed some telling, with fun voice, to convey her love of learning and science; I’m already loving her as a character. But I think you can infuse some great showing, too, by zeroing in on this scene in more detail as I suggest above and using it to show us her reaction to this impossible occurrence. We’ll learn LOADS that way. Is she stunned? Terrified? Exhilarated? Is she calling for her mom? Desperately looking for a camera to get proof?

Back to the decision to take us out of this scene so quickly: Without reading more, it’s hard to for me to determine if the trip back in time works or not; but my advice would be to beef up this scene even if you choose to back us up afterward.

Last, I’m unclear what you’re attempting to convey with your chapter sub-heading. I LOVE the voice you’ve captured. I know a lot about the kind of ride I’m in for just from that (along with the narrator jumping in), and I can tell it’s going to be cheeky fun. But I’m not clear how that heading relates to the chapter title, nor to what I’ve just read.

Thank you, Jessica, for the critique! We are showcasing three mentor critiques each day leading up to the Pitch Wars 2019 submission window, so make sure to read the other two critiques for today and come back tomorrow for more.