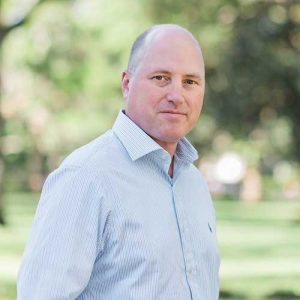 Michael Mammay is a science fiction writer. His novels PLANETSIDE and SPACESIDE are published by Harper Voyager, and his third novel, COLONYSIDE releases in December of 2020. Michael is represented by Lisa Rodgers of JABberwocky Literary, and he lives with his wife in Georgia.

From the author of Planetside, a Best Book of 2018 (Library Journal) 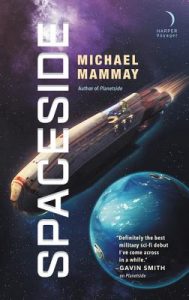 Following his mission on Cappa, Colonel Carl Butler returns to a mixed reception. To some he is a do-or-die war hero. To the other half of the galaxy he’s a pariah. Forced into retirement, he has resettled on Talca Four where he’s now Deputy VP of Corporate Security, protecting a high-tech military company on the corporate battlefield—at least, that’s what the job description says. Really, he’s just there to impress clients and investors. It’s all relatively low risk—until he’s entrusted with new orders. A breach of a competitor’s computer network has Butler’s superiors feeling every bit as vulnerable. They need Butler to find who did it, how, and why no one’s taken credit for the ingenious attack.

As accustomed as Butler is to the reality of wargames—virtual and otherwise—this one screams something louder than a simple hack. Because no sooner does he start digging when his first contact is murdered, the death somehow kept secret from the media. As a prime suspect, he can’t shake the sensation he’s being watched…or finally succumbing to the stress of his past. Paranoid delusion or dangerous reality, Butler might be onto something much deeper than anyone imagined. But that’s where Butler thrives.

If he hasn’t signed his own death warrant.

The Strider sisters were born together but torn apart as far back as their memories reached.

Mish’kah lives among the stars, careening through space with her best friend on a requisitioned ship designated to collect and research artifacts for the Cosmic Federation of Alastor. Each found relic brings her closer to rising in rank, but no one in the chain of command has been able to explain her ability to touch remnants of the cult of Tethras. A rare feat only she can complete unscathed. [This is a strange place for a sentence fragment (it would be okay in the story, but it’s odd in a query). I’d attach it to the previous sentence with either a comma or an em-dash] No one shares the affliction of her abnormal blood. If only her sister was still alive[,] maybe she wouldn’t feel so alone. [Solid opening paragraph. I wouldn’t change much, if anything.]

Ris’kah is a devout follower of the omnipresent deity Tethras, yet she consistently struggles with the nature of the organization’s hierarchy. [Not bad, but could you be a bit more specific? What does she struggle with, or what aspect of the hierarchy. I think that would give us a bit more insight into the character.] Despite this, she pursues the trials which would lead to her Exaltation by eradicating an entire star system to obtain her own Sunblade. [Good info, but slightly awkward wording. Consider a small revision for clarity.] The weapon comes with a hefty price on her sanity, though, and she is plagued by visions of her past and [her] long-lost sister, twisting her further off the path she’s been taught she was meant to take. [Here too, we could use just a touch more detail…what path? Or what aspect of the path?]

From separate sides of the known galaxies, the twins set on a course to identify and validate their strange existence. Untangling their secret bloodline leads them closer together. When their paths intertwine, they are faced with the consequences of a life spent in parallel lines. Now that they have found each other again, they must decide whether their shared DNA is enough to bring them together or define new paths that will rip them apart once again while the universe crumbles around them. [I love your format. Character 1, character 2, then how they interact. What’s missing from paragraph 3, though, are specifics. You’re explaining the conflict, which is good, but it’s in generalities. Rip them apart, universe crumbles, define new paths…these are all phrases that could fit dozens of different SF books. Can you give us details that show something specific about your book?]

TITLE is an adult sci-fi space opera [complete] at roughly 120,000 words with series potential. The story takes place in an extensive universe and follows four vastly different perspective characters in a thrilling adventure [generally don’t tell us it’s a thrilling adventure. The reader will decide that on their own. That you think it’s thrilling is a given, and thus goes without saying.] about the process of tearing down multi-faceted religious and governing organizations. It reads like Dune by Frank Herbert meets Seven Devils by Elizabeth May and Laura Lam, with strong elements of space fantasy like the Star Wars Saga. [I don’t think Seven Devils works very well as a comp. You want comps that people are going to recognize. I’m very much up on recent SF, and I had to look this up because I hadn’t heard of it. Also, it’s almost *too* new, having only come out on August 4th. You can do a book that new if it’s a big release that a lot of people know, but in this case, I don’t think it helps you. Because if I haven’t read it, chances are good that very few (or none) of the mentors have, and thus the reference is lost on us. (No offense to the author…it looks like a great book). If you find yourself querying six months from now, it may be a different situation.]

CFA.ASTRO.DOR Directive 1344.1: Officers of the Cosmic Federation of Alastor are required to shelter any registered politician seeking asylum until deliverance to the nearest Starbase.

It was on the first day of her last day under the command of her greatest friend that Mish’kah Strider was grazed by the keen edge of her own awful purpose. [This line confuses me. I don’t get the first day of her last day part of it…to the point where I read it multiple times trying to figure it out. The second half feels a little overdone…grazed by the keen edge…first, it’s passive voice, and second, it feels too early for such a big statement. You can foreshadow, but such a big one this early feels like you’re forcing it.]

Under the distant and dying star of Gilead rotated the lonesome Ragnar Prime, a desolate and empty place devoid of life. The temperature was consistently below zero. [This is an interesting spot, as it’s a tough balance in SF novels. You are opening with setting…world building. Generally it’s better to start with character and feed the world building in as the character interacts with the world. Readers tend to connect first with the character.] The cold never slept, and neither had she for precisely three days. The frigid air slivered into every crevice of the S-Class Research Pinnacle designate IP1408-01 and swathed the crew in a harsh, biting existence. [This is a good example of what I’m saying…you show how the world impacts the character. Better.] It forced them to pour into thermal jumpsuits, with layers upon layers beyond. [Instead of the crew here, can you talk about Mish’kah specifically? Bring the story tighter into your main character in the opening pages. Show her, and her reaction to the cold.]

As she lay awake – again – in her bunk, Mish’kah suffocated under the weight of her endlessly caked on clothing. Skadi, from what she could recall as a bairn, had the coldest nights in its system. Still, her lithe frame never endured the aching that crept into the marrow her bones more than when this shithole’s axis shifted and bathed its white desert in stained midnight. [Love this. This is what I’m talking about when I say to give us world building as the character interacts with it…exactly what you’ve done here. This might a decent opening…the character shivering and interacting with the world.]

It had been two week-cycles on regulated time since they landed. She felt trapped, tethered to the uncertain coordinates that were passed off to Lumin Sif through a flickering holoscreen desperately begging to be upgraded. If they had the Bits, maybe, it could have been. Or maybe Gavin preferred the faulty wiring. [This is interesting. Could you get more from it by showing a bit more of her feelings about Gavin? Instead of saying maybe, tell us what she thinks? I think that would be stronger character development, and it would set up their relationship with each other. Maybe doesn’t really make us feel anything, since we don’t know Gavin yet. If we get her opinion, it’s giving us an impression of him.]

They found their little comforts in that, their shoddy reality.

They found little comforts in each other. [Another spot where I think you’d be served by making it about her instead of them. These are nice lines…I like them, and they have a nice rhythm. But I feel like you might be better served with something that brings the story tighter to the character. If you interest readers in the character, they’ll follow her anywhere.]

Thank you, Michael, for the critique! We are showcasing three mentor critiques each day leading up to the Pitch Wars 2020 submission window, so make sure to read the other two critiques for today and come back tomorrow for more.