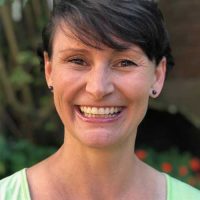 Jessica Vitalis writes dark middle grade fantasy and is an active participant in the literary community. In addition to coordinating Letters for Kids, she volunteers as a Pitch Wars mentor, with We Need Diverse Books, and contributes to The Winged Pen. The rest of the time, Jessica can be found chasing her two precocious daughters around Ontario or changing the batteries in her heated socks. Represented by Saba Sulaiman at Talcott Notch.

“It’s just a box,” Ashley said, as she kicked the flimsy cardboard with her sneaker. “Ain’t nothing to be scared of.” [Dialogue can be tough to open with since we don’t know who is speaking or where they are, etc. In this case, I think the bigger issue is that this makes the reader visualize a plain cardboard box, which leads to disorientation later when we discover it’s actually something quite different. And would she really kick a cardboard box that’s hooked up to a computer and all sorts of other things (and risk ruining it?) The voice is terrific, though!]

I wasn’t so sure.

Ashley could sometimes be a loudmouth bully, but she was also the smartest kid in seventh grade.  And she was my cousin. That was the worst part. We were family and that meant that more often than I liked, we ended up hanging out together.

The heat built up to a sticky, thick level inside of the clubhouse and this made it made it difficult for me to catch my breath. [Nice detail.] Ashley seemed to be completely unfazed by it. It was late afternoon by now, but the sun looked like it planned to do a bit more cooking [I love this!] before it sank beneath the horizon.

The cardboard box looked like it had been picked out of a grocery store dumpster, which is probably because that’s exactly where we found it. [Still picturing plain cardboard box.] The decorations and accessories [Whoa; what decorations and accessories? I’m thinking paint and feathers and sequins. Help us visualize what we’re looking at in the beginning so we’re not confused here.] were clearly added after it was dragged up into “The Purple Clubhouse”, which was the store room back behind the [Instead of “the” can you tell us who the auto shop belongs to?] auto shop.

Wires covered the dirty cardboard box from one end to the other, feeding long coloured lines from an old laptop into lights, buttons and who knows what else [I’m not sure how to visualize the “who knows what else” part. Also, this sounds a lot different than the “decorations and accessories” mentioned above.]. I certainly didn’t know what most of this stuff was for [So obviously Ashley is the brains, but they found the box together; didn’t the MC help with the project? Does he really have no idea how it works? I have the sense you are playing coy with the opening, leading up to a reveal that perhaps this is a time-travel machine or something along those lines, but I wonder if it wouldn’t be more effective to tell us right up front what we’re looking at and focus more on the MC’s inner state to hook us––his doubt that it will work? And Ashley’s smug assurances?], but Ashley assured me it was safe. [Can you show us this instead of tell us?]

“And I just crawl inside?” [Another surprise! I had no idea the box was big enough to hold a kid. Also is this how the MC would really respond to her saying it’s just a flimsy cardboard box? Wouldn’t he tell her to crawl inside if it was no big deal?] I asked sheepishly. “What’s gonna happen.” [Substitute question mark for period at the end of this sentence. Also, it’s hard to believe the MC hasn’t asked before this point what might happen. Wouldn’t there have been an argument about who has to step inside or something along those lines? Plus, you mention later that she’s already told him she’s done it before—he would have asked a lot more about what it was like at that time, so this isn’t ringing true.]

She laughed. She didn’t even pretend she wasn’t laughing at me. Ashley knew I was getting scared, but she couldn’t care less about making me feel any better. “Like I said Ryan, [I like that you worked his name in, but can you find a more organic spot for it? There’s no reason for her to use his name here, so it feels forced.] I’ll keep the setting low. We’ll put it at an hour.”

An hour wasn’t so bad. And she said she’d tried it already, but I doubted that. [Why would she have tried it without the MC? Who ran the machine if she tried it already? Also, I feel like this is a conversation we need to see (her telling him about trying it).] If she didn’t try it and it really is something she’s saying just to get him to agree, we need to see how he knows she’s lying—she lies all the times or does something with her face when she lies or whatever.]

Overall, this is an intriguing opening and you have a great middle grade voice, but I’d encourage you to rework it in such a way that the reader is better grounded in what is happening, adding in a bit more about how they got to this point (without going too heavy on backstory), and fleshing it out so that we can really feel the MC’s anxiety/doubt (in addition to his irritation—I’d definitely love to see more interaction between Ryan and Ashley). As it stands, it feels like a stretch to think they found the box together, she went and turned it into something without him, and then she tried it herself without his help.

One final note: I’m super into names. Right now, Ryan and Ashley don’t tell me too much about the characters. Have you considered names that will communicate more about who they are as people or where they are from in order to make the reader more interested in learning more about each of them? For example, I have the sense that this story might be set in the south. So rather than Ashely, maybe she is Ashley Marie? What does Ryan’s name say about him?

Thank you, Jessica, for the critique! We are showcasing three mentor critiques each day leading up to the Pitch Wars 2019 submission window, so make sure to read the other two critiques for today and come back tomorrow for more.