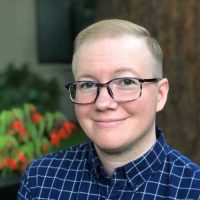 A.J. Sass is a fiction-writing figure skater, inclined toward adventures of a traveling nature. He is autistic, non-binary, and keen on exploring how gender identity and neurodiversity impact character narratives.

An avid figure skater, A.J. is a US Figure Skating double gold medalist in Moves in the Field and Free Skate, a silver medalist in Ice Dance, and a member of the 2019 national silver medalist Masters synchronized skating team, IceSymmetrics.

A.J. grew up in the Midwestern US, came of age in the South, and currently lives in the San Francisco Bay Area with his boyfriend and two cats who act like dogs. His middle grade debut, ANA ON THE EDGE, will be published by Little, Brown Books for Young Readers in Fall 2020.

Eleven-year-old Prince Murt Firstrate of planet Achilles comes from a long line of Royal Overachievers. Generations of his ancestors’ scientific and athletic awards line the castle walls. Even his brother and sisters’ medals and trophies sparkle on the family room mantle. Murt’s achievements, on the other hand, are average. At best. His only real skill is winning at video games. And that trophy never made it higher than the coffee table. [I love the information presented and cadence in this opening paragraph! I would, however, aim to show what Murt wants sooner (character’s goal and driving force behind the plot of your novel), then jump into this background information after since it reflects an initial impediment to whatever he’s seeking. I also wonder if equaling his brother and sisters’ accomplishments IS his goal based on what you’ve written above. It’s hard to know, so that may require some minor rewording and clarification.]

So when Prilla Silveroll, his waaay-too-studious friend [I love the voice here], invades his gaming den with news of the first ever Intergalactic Scavenger Hunt, Murt sees a chance to earn some respect. [This is great! I’d just hint that this is what Murt wants in the first paragraph.] A scavenger hunt should be easy-peasy for a serious gamer like Murt. And the grand prize, the Intergalactic Platinum Cup, holds more prestige than any trophy his siblings have ever won!  [So this is his ultimate goal, set in specifics. I love it (plus, it sounds like it’ll be a lot of fun to read about). My only comment once again would be to mention that Murt wants to be on par with his overachieving siblings—or outshine, or whatever he truly wants—in paragraph one so we have a clear goal for your main character stated at the outset.]

When Murt is chosen to represent his planet and given a brand new spacecraft for the race, he starts making plans for the most awesomest victory party ever. [It’s quite hard to include voice in a query, but you’ve managed to do it really well in a way that doesn’t interrupt your pitch.] Until he hears [who did he hear it from? Is that relevant? If not, consider rewording; “learns” might work just as well] his greatest gaming rival, Cuppajau from the Percolate System, joined [“has joined” sounds a little more active, but totally your call on this one since it’s just preferential.] the scavenger hunt too. Now the sure-win race [maybe personalize this a bit by saying “Now Murter’s sure-win race?] becomes a ‘difficulty level: expert’ competition. And with Murt’s standing in his family and his planet’s reputation riding on the outcome of this hunt, losing to Cuppajau this time [“this time” threw me off a bit. I see from earlier in this paragraph that Cuppajau is a gaming rival but since no past games were referenced—and likely shouldn’t be in something as succinct as a query—I’d consider removing it.] is not an option. [YES! These are great stakes that are both personal to Murt and impactful to other people he cares about.]

TITLE is a 50,000 word humorous MG story. It will appeal to fans of Russell Ginns’ “Samantha Spinner and the Super Secret Plans” and Gordon Korman’s “Slacker”.

[There’s so much working well in this query already. It’s clear you’ve done your homework and spent some time crafting a tight, engaging pitch (or else you’re just naturally talented, in which case I am supremely jealous). Because this was already a strong query, it allowed me to dig deeper, to be even pickier. As I mentioned above, I’d spend some time defining Murt’s goal/what he wants more clearly, and put it closer to the beginning of your query in paragraph one. The rest of my comments are more subjective, intended to make an already strong query even stronger. Once you’ve stated Murt’s goal/desire up front, you’ve already done a great job of giving him the opportunity to reach his goal by mentioning the scavenger hunt, then by hinting at an obstacle that’ll stand in his way by introducing his rival, Cuppajau. The stakes are clearly stated, as well. Just make some minor tweaks, add some biographical information, personalize to individual agents where appropriate, and this feels good to start querying or sub to PitchWars. Best of luck to you, whatever your goal!]

Thank you, A.J., for the critique! We are showcasing three mentor critiques each day leading up to the Pitch Wars 2019 submission window, so make sure to read the other two critiques for today and come back tomorrow for more.