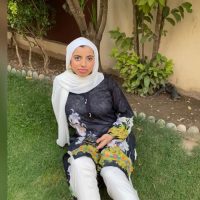 Sarah Mughal is a Pakistani Muslim writer studying at the University of Toronto and a founder of Stop Uyghur Genocide Canada. She likes to mix her writing with her activism. Aside from school, she practices martial arts, and is one of the co-founders of #APIpit, the first Twitter pitch event for Asian and Pacific Islander artists. After being a PW mentee in 2019, she’s excited to be co-mentoring this year! 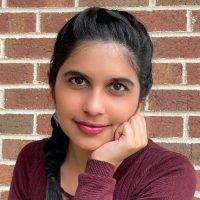 Vaishnavi Patel is a law student focusing on constitutional law and civil rights. She likes to write at the intersection of Indian myth, feminism, and anti-colonialism. Her debut novel, KAIKEYI is forthcoming in 2022 from Redhook/Orbit. Her short stories can be found in The Dark and 87 Bedford’s Historical Fantasy Anthology. Vaishnavi grew up in and around Chicago, and in her spare time, enjoys activities that are almost stereotypically Midwestern: knitting, ice skating, drinking hot chocolate, and making hotdish.

Magic glides over Mairie’s skin, but her ravenous sparks don’t heal like turmeric or cut like steel. Her magic explodes. [This opening is really voicey and hooked us from the start! But we were left wondering whether Mairie is the only one with magic or if lots of people have magic and hers is different. That seems to matter if you’re setting up a comparison between her magic and other things! You mention sparks/explosions which imply the magic is fire-related, but more specifics could clear this up.] And almost kills a foreign prince, jeopardizing the fragile alliance between their kingdoms.

Though the prince doesn’t actually mind landing on his ass. As the chosen one, pawn of destiny, Trevior’s supposed to be indestructible. [We love to see fresh takes on the chosen one trope! This is a great way to set up a trope and a twist.] He’s supposed to be Archdeacon, and rule the empire  — but he just wants to live his own life . [You can rephrase, but we wanted to cut out some of the repetition to give you more words to explain in other places.]

[The first two paragraphs do a great job of setting up the characters. But this paragraph gets confusing — we go from a jeopardized alliance to a coup and a vision. Consider removing the vision part and focusing on costs/choices.] When a coup lands a dangerous usurper on the Archdeacon’s throne, the two unlikeliest of allies—Mairie, the pious archduchess, and Trevior, the wastrel prince—must join forces to defeat him. Only they can save the empire— but as they work together, they begin to realize that >the cost of success could be Trevior’s freedom—and Mairie’s life.

[Does the prince love the empire? You set it up as the prince seeming disinterested in the empire’s best interests, so these stakes are confusing.] They must choose: give in, and save everything they love, or fight destiny [fighting destiny without more can feel like a cliche stake, and will probably change if you cut out the ‘vision’ element of the query. What would “fighting destiny” actually involve? You can be more specific here!] and let the empire burn.

XX is a 132,000-word multi-POV epic fantasy novel with a strong feminist bent and authentic LGBT+ representation. It evokes the powerful protagonists of The Women’s War and the compelling world-building of The Priory of the Orange Tree. I drew on my family’s Ottoman Empire roots for the setting. It is intended as a stand-alone novel with series potential. [We really like this query overall! We had lots of thoughts, but that’s because the query did a great job of making us curious about the story.]

Though I worked in academia as a criminologist for many years, I’m currently a freelance copy editor, primarily for a maternal advocacy non-profit. The bulk of my time is spent raising two small minds to be the next generation of avid readers. [this is a great example of a concise and interesting bio! Nice work!]

Mourning bells always meant death. Death was in their name, in the dark depths of their sound, in the way everything froze the moment the first peal rang out. Everything died in the brief silence that followed that knell. [Great and evocative opening paragraph!]

Their ceaseless tolling had portended the loss of her freedom, each knell another bar in her cage, a prison of sound and loss.

She ran down the corridor, her slippers skidding on the polished tile, and stopped short at the great walnut doors leading to the stairs of the main hall and her throne room beyond. She hesitated. A servant’s door, unassuming, was set into the wall beside her.

The door opened from the other side, revealing a servant with one hand on the handle, a tray with Mairie’s breakfast precariously balanced on the other.

“Your Majesty!” The servant dropped into a deep curtsy, murmuring an unheeded apology as the tea service scattered across the floor, the cacophony of silver on stone a pale echo of the bells outside. [the interaction with the servant feels just slightly unnecessary, in that it doesn’t tell us much about the character or palace life (as we already know from saying “her throne room” she’s royalty). If this interaction doesn’t come into play later, consider cutting this here so we can understand more quickly what’s going on with the bells – this is the sort of opening that leaves readers deliberately confused, which is working well for you, but that confusion shouldn’t last too long.]

Mairie tore through the open door, taking the tight stone staircase two steps at a time, half falling, half stumbling, until she reached an open archway to the small courtyard beyond. Thick black soil spilled out onto the mosaic paths, staining the delicate silk of her slippers and her nightdress as she picked up speed. The bells pealed, their thudding in her ears only slightly louder than that of her own heartbeat.

The bells had to stop. [Down here seems like a good place to say more about what the bells mean – perhaps who died and why the bells are ringing? We already read about the bells and how the sounds made her feel, and the repetition here isn’t as needed.] [Overall great job – these pages are engaging and we wanted to know more about what happens next!]

Thank you, Sarah, for the critique! We are showcasing three mentor critiques each day leading up to the Pitch Wars 2021 submission window, so make sure to read the other two critiques for today and come back tomorrow for more.