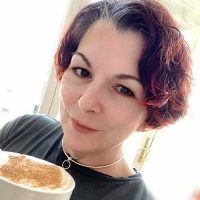 Rochelle Karina is a 2018 Pitch Wars mentee and former magazine and newspaper editor now working as a freelance writer in the heart of Baltimore. When not at her desk coming up with new ways to torment her characters, she can often be found in the kitchen, glass of wine in hand, cooking a meal for friends.

Benji Bryzinski should be focused on one thing: his rookie season playing for the NHL’s Washington Eagles. Certainly not his prickly new roommate—a dude who seems to have more going on than just hockey, video games, and wheeling on girls. [The first sentence grabbed me – a quick intro that tells me who this guy is and sets me up for a “but”… The second sentence doesn’t quite flow. The “certainly” ties back to what Benji should be focused on, which makes the reader pause for a moment to think. Nor am I sure what is meant by the description of his roommate (he has more going on? In what way?)

Suggestion: Build a stronger bridge between the intro to Benji and the line about his roommate. Is he having to coddle the new roomie? Is ignoring him that difficult? Build some conflict in here.]

Olly Järvinen should be focused on one thing: getting his career back on track. Last season destroyed his mental game, [delete the comma] and left him one word away from getting dissected on ESPN like a helpless lab animal labeled First Gay NHL Player. But he’s on fresh ice with his new team, and if Olly’s good at one thing, it’s playing through the pain. [I like the repetition of intro for the two characters. Are these the roommates? Because Benji talks about his roommate wheeling on girls, and here we learn that Olly is gay – I’m left to assume he is still closeted, though had a close call being outed? I might give a bit more depth here.]

As the season progresses, Benji and Olly learn to handle their relationship as it deepens from teammates to friends to, maybe, something more. Benji’s relentless focus on becoming the best hockey player he can be—even if his version does involve therapy, yoga, and kale smoothies—has left him unprepared to navigate the feelings he’s developing. Meanwhile, Olly will have to learn how to be honest about his identity with the people who matter to him, if he has any chance of surviving the season. [The start of some nice sounding conflict here – the view of Benji gives a clear impression of some personality conflicts – maybe give more about Olly as well. While there’s the bones of conflict, there is no real mention of stakes – and those could be wrenching.]

Title (99,000 words) is my first novel. It offers the heart and humor of Rachel Reid’s Heated Rivalry, written with the teeth of Alexis Hall’s Pansies. While it can stand alone, I am working on a second installment for the planned series, featuring a high draft pick and his very tired captain. If I’m not writing, I am probably shouting at the Philadelphia Flyers. [Nice comps, I’m not sure I’d describe the next book in the series – just state that it’s a standalone with series potential. Then you’ve got a bit more space for some meatier stuff above. DO specify genre here as well and I don’t know that you need to state this is your first novel. Just, Title is a m/m romance complete at 99,000 words. Or something along those lines. Also, is this dual POV?]

[Overall – this got my attention. I think there are two interesting characters here, who have some great potential for both internal and external conflict. But I do think those need to be highlighted more in the query, and definitely hit more on what have they got to lose?

If this is a romance, make that clear and strong. Get into the real meat of the conflicts – both internal and external.

It sounds like you’ve got a good story with solid bones.

Suggestion: Since you comp it, I’m sure you’ve read the blurb for Heated Rivalry, but take another look – it’s got a similar format to yours, intro the two characters and then summarize. But look specifically at the stakes. Each character is introduced, and their internal stakes stated. Then the combination paragraph outlines the potential cost of their relationship (external stakes).

Style note: generally, in a query, book titles are in ALL CAPS rather than italicized.

Well done, and sweet sounding story! Thank you for sharing!]

Benji was just a dumbass kid from Duncannon, Pennsylvania, but he had arrived. [give us his last name as well here – and if he’s an adult, I might avoid using “kid”.]

That was what he told himself his first morning in Washington, DC, leaning on the railing of his condo’s balcony and looking out at where the river was bracketed by the blue glass towers of office buildings. [You’ve set up a nice visual, but it needs a bit more personalization, a bit more punch to really get the reader into the story. Show the view from Benji’s perspective – take the reader into his head.]

Well, he wasn’t quite in DC. But Rosslyn, Virginia was more convenient to the Washington Eagles’ practice rink, where he would be spending a lot of fucking time over the next three years of his NHL contract. [Nice job giving the reader a sense of place in these opening paragraphs and his job. Generally, avoid using italics for emphasis – and if you must, limit how often. Let your words create the emphasis for the reader.]

His phone buzzed in the pocket of his basketball shorts. He fumbled it out, managed to drop it on the cement with an ominous crack. Maybe not so ominous, now: if he broke it, he had enough money to buy a new one, without even thinking about the balance in his bank account.

Still: “Fuck.” [I like the info here – that he used to have to worry about money but now does not. But the paragraph is a bit awkward. Again, get us into Benji’s head. The “fuck” should be immediate, not after a series of thoughts that he can afford a replacement. Even if you can afford the replacement, a busted phone is still worthy of a “fuck” when you hear that sickening crack.]

His sister Krista’s face was lighting up his (unbroken) lock screen. [I’d choose a stronger phrasing – “was” weakens this sentence and creates distance between Benji and the reader. Also, style and personal thing, I’d avoid using the parenthetical here.]

“What’s up?” he asked her [delete “her” – she’s the only other person mentioned, so it’s not necessary to clarify]. It was early for her to call, not quite eight. [nice info about his knowledge of her, as well as a time stamp.]

“I’m coming down for a few days to help you get settled, like we talked about,” she said, all at once, the way that she did when she was pretending that she wasn’t coming completely unglued. “I’m on I-270. I’ll be there by nine.” [I love the description of her here – it’s both a description of the way she’s talking, and gives insight into Benji’s awareness of his sister. That one sentence is highly personal. It’s in his head. It’s what the reader needs to feel connected to him.]

“We talked about that for five minutes like, two weeks ago,” Benji said. “What the fuck is going on?”

“It’s nothing. I just want to make sure you’re getting settled. Bye. Love you.”

“Love you—too?” Benji said, into the dead space on the phone where Krista had been a second before.

[I really liked the query and was excited to get to know Benji. And while this has potential to be a good scene, I’d like to see more depth from Benji here – more of what’s going on in his world. I’m not 100% certain this is the right place to start.

The story starts off stating Benji was just a dumbass kid from a presumably small town, but now he’s arrived. And he no longer has to worry about money. And is affording a condo with a river view. And just signed with the NHL. All of which are interesting facts, but lack any real sense of wonder or excitement from him – in this framework, the reader should be seeing what all this means to him.

Does he feel accomplished? Is he nervous about not being good enough? Cocky about his place in the world? Ground the reader in Benji so they care about him and what happens to him.

The premise is intriguing, the characters interesting, the conflict and stakes have potential, but the opener doesn’t make me care about Benji or invite me into his world.

As always, this is one person’s opinion and publishing is incredibly subjective. Thank you for sharing your work!]

Thank you, Rochelle, for the critique! We are showcasing three mentor critiques each day leading up to the Pitch Wars 2020 submission window, so make sure to read the other two critiques for today and come back tomorrow for more.