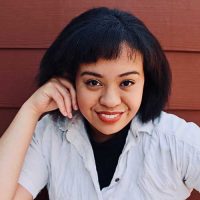 Emery Lee is a kidlit author, artist, and YouTuber hailing from a mixed-racial background. After graduating with a degree in creative writing, e’s gone on to author novels, short stories, and webcomics. Emery is the author of MEET CUTE DIARY, a YA trans romcom out from HarperCollins in 2021. When away from reading and writing, you’ll most likely find em engaged in art or snuggling cute dogs.

Sixteen-year-old Noah Ramirez loves love, but as a trans boy at a conservative school, he never had much hope for an epic romance of his own. To combat the loneliness, Noah created the Meet Cute Diary, a blog dedicated to documenting trans meet cutes across the globe to give his fellow trans people a new hope for love. Only, the Diary’s entirely fiction, inspired by near-meet cutes Noah stumbled into and rewrote happy endings for.

When a twist of fate brings Noah to Denver for the summer, he sees this as the perfect opportunity for his own meet cute. But when the Diary is exposed as a fraud, Noah has to put his love story on hold to save the Diary, and the hope it gives his trans readers—unless he can use his own staged romance as evidence of the Diary’s credibility. And really, as a boy who’s spent the last year doing nothing but writing fake romances, building his own should be easy.

But as Noah’s feelings spiral past the realm of fake dating, and he begins to see his own dream romance come to life before his eyes, he starts to have his doubts. Turns out dating in real life isn’t quite the same as dating on the page, and with the Meet Cute Diary hanging in the balance, Noah will have to decide what he’s willing to sacrifice for the ultimate happily ever after.

Title is a middle grade science fiction book with [complete at] 45,000 words. I believe readers who loved Inkheart by Cornelia Funke and A Wrinkle in Time by Madeleine L’Engle would also appreciate The Lost Brother. [These are really old comp titles. I highly recommend replacing at least one of them with something published in the last 2-3 years.]

Violetta Truax’s brother Ethan and his two white mice has [have] disappeared for [is this “for” the Library or “from” the Library? While it’s good to get into the action quickly, remember that we don’t have the same context you have. What is the Rigby Library? Is this the goal they’re trying to reach or the place that they’re from? This inciting incident won’t mean anything to your reader unless you first give them some context as to what the world was like for your character before it happened.] the Rigby Library. But six months later Einstein and Plato and their cage have suddenly reappeared in his room. Now Violetta doesn’t believe anyone[—]not her counselor, the principal, not even her parents [What doesn’t she believe them about?]. Something happened to Ethan at the library and she is determined to find out what. The only person who believes her is her best friend Becky but even she has doubts. She needs to convince everyone to allow her to attend Rigby Middle school [What is Rigby Middle School? I’m assuming it’s somehow connected to the library, but how? We need that information to follow this query.] be a good student, keep an eye on the librarians and find her brother Ethan.

Ethan has been kidnapped [So this right here is your inciting incident. Everything changes when Ethan is kidnapped and his sister tries to find him. What we need to see in that first paragraph is what this world consists of and who your characters are. We don’t want to see Violetta’s goals and actions until this second paragraph]. He has been taken to a planet inhabited by a race called the Meecies. They are a small race of aliens who look like a combination of Earth mice and rats. Except they are four feet tall and walk on two legs. Another race of aliens has enslaved them. They want an element the Meecies planet is made of, ‘Faracid’. They will consume it, destroy the planet and the entire population of Meecies if someone doesn’t do something to stop them. Ethan is determined to protect the Meecies at any cost. But now the aliens have infiltrated Earth putting Violetta and Ethan in peril on two different planets in our universe. [How does Violetta’s part of the story lead to an alien invasion? We need the thread that draws these two elements of the story.]

Title is the first book in a Trilogy of Violetta, Ethan, the Meecies, Rigby Middle School and the Librarians. [For the sake of your query, who is your POV character? Are we following Violetta, Ethan, both? Dual POV queries are hard because the typical query structure favors following one character, so if there is one character who takes priority, follow that character through your query. If both are of equal importance, make sure that you’re lining up both sides of the story so that they feel like one cohesive whole. How do these elements connect to, impact, and lead to each other? How do Ethan’s experiences with the Meecies affect what Violetta is doing with the Library and vice versa?]

I live in Fishers, IN. just north of Indianapolis. I am a retired college professor with a background in Graphic Design. I live with my husband and two crazy basset/beagle hounds and spend a great deal of time with my five grandchildren who are 7, 6, 4, 4 and 1. Three of which are girls who I want to grow to be strong intelligent women who pride themselves on being women.

Thank you for your time and consideration. I look forward to hearing from you.

“Chinese again?[“] Violetta sighed as she watched her mom scoop orange chicken out of a cardboard container and then hand it out to her. She eyed both of her parents. They didn’t look too tired tonight. She decided to make her demand her and now. [“][Make sure you proofread before you send!]I’m not going to Rigby Middle School. I’m going to Jamestown?[Exclamation mark instead?]”

“We’ve talked about this Vi.” Her mother sighed back. “Rigby is a much better school than Jamestown and this is where your father and I think you belong.” She [said,]waving a fork at her in total dismissal.

“Oh, so no one cares if I disappear too,” [I didn’t realize Ethan was already gone before the start of the story from your query. I worry we start too late in the story because we don’t get to see what their life was like before Ethan disappeared. If you start the story here, your inciting incident would be different, but I’m not sure what that would be from the query.] she [if Violetta and her mom are talking, it’s better to just use her name here so we know who “she” is referring to] said, trying to get her father’s attention. He stared back at her; eyes glazed. She knew what this meant, he was concentrating on the numbers. He didn’t see her; he didn’t even hear the conversation.

“Your counselor agrees with us and so does the principal. Your education is very important. Rigby is one of the most cutting-edge schools of its kind. It was developed and designed by the Rigby town council. It is one of the best schools in the state. You are lucky to get to attend such a good school.”

“Try telling Ethan that,” she mumbled to herself. She looked back at her mom, but she didn’t take the bait. She watched her [mother’s] face [] closely, The argument was over. Her thoughts were absorbed in her work now too.

Ever since Violetta could remember, her older brother Ethan had taken her care of her. He was three years older than her, and she was his shadow. If Ethan went to the library, Violetta went to the library. If Ethan played chess, she played with him. When Ethan cooked dinner, which he did most of the time, she cooked dinner. They were inseparable. Now she understood they were more than just brother and sister. Caring for her had been forced upon Ethan.

Thank you, Emery, for the critique! We are showcasing three mentor critiques each day leading up to the Pitch Wars 2020 submission window, so make sure to read the other two critiques for today and come back tomorrow for more.