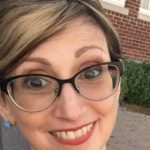 Lisa is an award winning author of three fantasy/thrillers for young adults,
UNTIL BETH, VISION , and BREAKING GLASS .  She’s also a cover designer and ​Professor of Graphic Design at Bronx Community College. www.bcc.cuny.edu 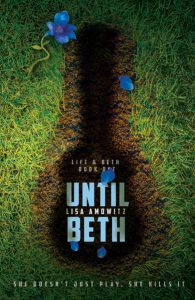 She doesn’t just play, she kills it.

Talented rock guitarist Beth Collins has been barely holding herself together for months, ever since her boyfriend and bandmate became the latest victim in a string of suspicious disappearances. When her brother is injured an accident and she sees something dark billowing around him as he hovers close to death, she’s convinced her sanity is collapsing for good. Then she’s accepted by a boarding school for the musically gifted. All of her new friends are bursting with talent, but they’re also keeping secrets. Can she trust Vincent, who’s so sweet that his very touch makes her fears melt away? Or Xavier, who’s trying to tell her something but is hiding even more? Will anyone be safe when her true Talent comes out?

READ AND EXCERPT OF UNTIL BETH

The slaver wouldn’t be hard to kill. Ivory earrings swung against his neck, advertising his cruel profession for all those who dealt in flesh. He stood a hand taller than Oren, which made him a giant among men, and by the whorls of ebony and scarlet tattooed on his wide neck, he had been a warrior in a past life. Now soft from years of success, his loose and open stance left him exposed. [Good opening! You put me right into the environment, established the MC’s voice and described his conflict—all in your first paragraph.]

Foolish. Do they forget that we hate them? That we could be dangerous? [Not sure you need this. MC is already thinking of killing him so we know they hate him. Also, you tell us Oren can just go ahead and kill him in the next paragraph. I just realized that OREN is the mc and this is third person—at first I thought the narrator was someone close to Oren.]

Calculating black eyes followed the movements of his hands as sparks flew up from the anvil. Oren could have killed the slaver three times since the man had walked into the forge. But then what?

In the Southern Kingdoms, escape or freedom was nearly impossible this far from the coast. Slaves who repeated such tales of hope ended up working the mines or sugar cane fields, a kind of death by labor.]

If this slaver purchased him, he’d be taken north and sold in the Midlands where he could possibly earn his freedom. He needed to show his value. Focusing, each hammer swing precise as he shaped the kilij sword, he knew his craft was impressive for a slave-wrought blade. But the work brought him no joy.

He longed to use his full skill — his Galun, the way his Ungalli grandfather had taught him. But he couldn’t as a slave. The Ungalli people were dead. Except for him. All that remained of the fearsome warriors from across the Golden Seas were his nightmares, filled with the smell of fire and charred bodies. [Good.]

“Onaak.” The slaver repeated the name to Chiggor. Onaak, the only city-state with democracy.[Here you jump to something that is unclear. Who is Chiggor? Why does the slaver simply utter this out of nowhere? Shouldn’t he lead into it with “Where do you think I will take you, Slave?” or something along those lines?]

Alice—the writing is excellent and you have dropped me into a scene that I can see, smell and taste. I’m hoping it is not too derivative of other things that are popular now, but you at least have my interest and attention! Good work!

Thank you, Lisa, for the critique! We are showcasing three mentor critiques each day leading up to the Pitch Wars 2019 submission window, so make sure to read the other two critiques for today and come back tomorrow for more.