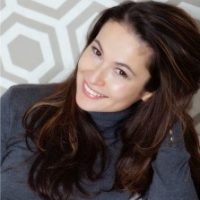 Diana A. Hicks is an award-winning author of steamy contemporary romance and science fiction. Her debut LOVE OVER LATTES, Book 1 in her Desert Monsoon Series, released in 2018. Kirkus Reviews called it, “A sexy and irresistible tale for fans of contemporary romance.”

When Diana is not writing, she enjoys kickboxing, traveling, and indulging in the simple joys of life like wine and chocolate. She lives in Atlanta, and loves spending time with her two children and husband. 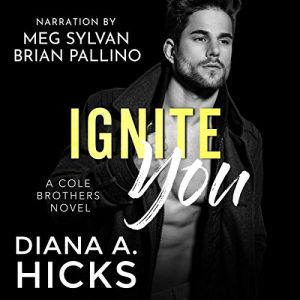 Those were just a few reasons why I hated Dom in law school.

Tonight…I hate his panty-melting stare, his wicked smile, and that loose-hip stride of his. I hate the way his biceps stretch the sleeves of his tailored suit. I hate that after two years, I can’t stop thinking about the almost kiss in the library.

So when he sits at my bar, acting like he doesn’t remember me, I do what any woman would’ve done in my position. I agree to a midnight hookup with the great Dom Moretti.

Ignite You is a steamy, slow-burn mafia romance that can be listen as a standalone. It is book one in the Cole Brothers series. Previously released as Love Over Logic.

I have written a crime thriller novel for adults, which I would like to be considered for publishing.

Two policemen. One a cautious old warhorse. One a young enthusiastic daredevil. They must ditch their personal animosity and come together to solve a series of crimes – broad daylight murder and series of bomb explosions – that threatens to expose the highest echelons of power. A sequence of events that began more than 50 years ago with Naxalbari movement in the tribal heartland of India.

[I would recommend following the standard query guidelines. Your first paragraph should include your book title, genre and word count. Ex. “[Title] is an 80,000-word crime thriller…”

Your next paragraph should include your book description starting with your character. What does your main character want? Why does he/she want it? and What is standing in his/her way?

Here’s a link to a blog that does a great job explaining the basic requirements for a query letter. https://www.janefriedman.com/query-letters/]

CM Shantanu was very restless; tapping his left foot against the sparkling white floor, drumming the armrest with his fingers in a rhythmic 1-2-1-2-1 [The first part of this sentence is telling. I would leave it out and stick with the second part which shows the reader how Shantanu feels. Ex Shantanu tapped his left foot against the sparkling…] Maitreyi kept stealing [rephrase to avoid passive voice. I would also include a line or two to give the reader a clue as to why everyone is so nervous. Just enough to pique their interest.] glances at her husband, getting more nervous every second. She could feel [how could she feel this? rephrase to remove the filtering] the tension building inside him, and felt he would explode any moment out of frustration.

It was so uncharacteristic of his secretary Naveen to be late. And that too on such an important day. Finally, he arrived in a huff, sweating all over despite the cool weather, [end the sentence here.] but before he could say anything Shantanu got up and took long strides to the door. Impeccable in white starched kurta pyjama and black waistcoat, he looked as handsome as ever. Maitreyi was jolted out of her reverie and ran after him with his briefcase. Today was no day to entrust these trivial things to the house helps. She gave it to Naveen and a glance passed between the two, leaving Naveen in no doubt that his boss was in foulest of moods. He almost [how did he almost run? Did he just think about going with him, but decided not to?] ran all the way to the car so that he could be there to open the door for him. [first 250 words end here.] Not that it was required of him, but still Naveen thought it would be a good way to extend The Olive branch. However, Shantanu did not even seem to notice the gesture. As soon as they were seated, the cavalcade started out of the CM residence.

It was the 70th anniversary of Shahid Diwas. All preparations had been made at the Assembly. 98% [spell out numbers] turnout was expected. You could always count upon the oldest 2% to fall sick genuinely or be absent out of sheer boredom, what with more than half the assembly above 65 years of age. [I’m not sure who’s point of view we’re in.]

[Brush up on filtering, run-on sentences, passive voice, telling vs showing, and point of view.]

Thank you, Diana, for the critique! We are showcasing three mentor critiques each day leading up to the Pitch Wars 2020 submission window, so make sure to read the other two critiques for today and come back tomorrow for more.