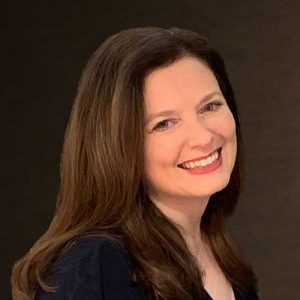 Laurie Dennison grew up in Florida, but she spent more time reading than soaking up the sun. A former English teacher, she now works as an editor, consultant, and web designer by day and writes young adult fiction by night. Laurie loves traveling, alternative music, and stories that grab her by the heart and don’t let go. After a few years on the west coast in California, she returned to Florida, where she lives with her family and their many pets.

Total Recall meets Grisha powers in TITLE, a 98,000-word YA speculative sci-fi novel with series potential. [I like this as the logline—it gives me a really quick sense of what the story will be about.]

In Jaylie Haddox’s world, humans must forget the past to save their future—literally. For the cost of one memory per use, Jaylie has the power to reverse [Sometimes wording for more active voice can help tighten up a query; in this case, you could say Jaylie reverses time…] time on objects and restore them to their original state. [At this point I’m wondering if this is a power unique to Jaylie or if all humans have this ability. Also, she must do it to survive or she chooses to do it in order to live longer?] She’s never faced a problem too big to fix—until a horrific accident kills her friend. When Jaylie fails to resurrect her, [The earlier sentence refers to objects—this usually works on people too?] something unprecedented happens to her powers: she loses the ability to pay the memory cost.

But Jaylie’s now cost-free power isn’t the miracle it seems. [So Jaylie can still reverse time, she just doesn’t pay the memory cost anymore? Does someone else pay it?] Ostracized in a chronically carefree society addicted to forgetting bad memories, Jaylie is desperate to end their dangerous preference for blissful ignorance. [Here I’m curious as to why she is ostracized and why she wants to end their ignorance—what has losing memories cost her or her loved ones? What did she discover that changed her mind when she no longer lost her memories?] After three years of trying to replicate her condition leads nowhere, [<-I’m not sure if we need to know how long it took—this makes me wonder if the story starts when she fails to resurrect her friend. A three-year time jump is pretty big in YA. What we might need to know here instead is specifically what she discovered that changed things.] Jaylie finally discovers a way to render humankind’s powers obsolete—only to have Shaye Lewis, a childhood friend she can’t remember, murder the scientists who would’ve helped her.

Frantic to save what’s left of her plan, Jaylie hunts him down. But as Shaye’s body trail reveals secrets about her powers even she can’t remember, she begins to question who the real enemy is. Jaylie must help Shaye [While a query shouldn’t give away all the secrets of the story, I can’t help wondering why she’s helping someone who’s leaving a trail of bodies. I think some more specifics about Shaye and his motivations might help here.] unravel the conspiracy that separated them and expose the mastermind who will stop at nothing to hide the earth-shattering reason they’ve been kept apart. Once the truth is revealed, Jaylie must choose between two futures: save the world and live haunted by the brutal past forever, or rejoin a world of artificial bliss and send herself and her loved ones smiling to early graves. [This feels a little like a false choice to me. If saving the world is an option, it would be hard to choose death for her and her loved ones, from my perspective.]

[Overall I’m intrigued by the concept. In sci-fi and fantasy queries, you have an added dimension of describing both the world and the struggle of the main character, and it’s important to remember that your reader only has the query as context and nothing more. I find that being as clear and specific as possible helps. The idea of reversing time on an object and a living being feel quite different to me—can all humans do both in this world? Does that ability make Jaylie different, until she loses it? Why does she want to render this power obsolete if it can save lives? What are the down sides? What do people give up when they lose their memories and experience “bliss” instead of remembering? And why is all of this personally motivating to Jaylie?

When we get to Shaye, what is his goal in killing the scientists, and what does Jaylie discover that changes her mind after reconnecting with him? If this is information that can’t be shared in the query, maybe you could frame it differently—for instance, when the scientists who could help her are murdered, Jaylie’s hunt for the killer reveals secrets about her powers…

Overall, I think focusing on the specific details of who Jaylie is, what she wants, why she wants it, and what’s standing in her way could help strengthen what’s already an intriguing query. Thanks for sharing it with me and the Pitch Wars community!]

I’m a freelance Japanese manga and anime translator. My previous manuscript won PitProm 2019. One of my short stories was a quarter-finalist in the 2017 ScreenCraft Cinematic Short Story Contest and ranked #4 on Coverfly’s Red List for the month of January 2018. I’m an active participant in Inked Voices and Free Expressions workshops. In my spare time, I like to ride horses and hope they don’t send me to the hospital. (Again.) [This is a great bio paragraph!]

Nothing brightens a day like a funeral. [This is a nice opening line. It does a great job of juxtaposing two seemingly contrary concepts and has me wanting to read more.]

It’s the fifth one I’ll see this month. Everyone on my block of the city is required to attend. Compass orders. I get the 8:00 A.M. service, so says my HALO notification—the last service before they take the body. Lucky me. But just because I have to attend doesn’t mean I’ll let Compass control what I do once I’m there. When funerals happen, I perform my own ritual. [This paragraph coveys a lot about the world, but it feels a little bit telling more than showing to me for the first page. Could you maybe show us her getting the notification, and then show us her ritual in the scene that follows?]

I push through the crowd that gathers inside the circle of glass columns. Metal coils wrap around each one and extend to the glass underfoot in a swirl of silver. I step over the lines, watching my shadow on the white marble beneath the glass. Light refracts from the columns with rainbow-tinted clarity. A wall of hedges and cherry blossom trees enclose the entirety of the Indigo Memorial—a miniature paradise within a fast-moving city. [This paragraph is really effective for me. You’ve set the scene with just the right amount of description, and you’ve done it by having Jaylie interact with the space. I actually wonder if this could be the second paragraph, right after the opening line—that way you would drop us right into the scene.]

Compass erected Indigo Memorials all over the city. [<- Again, the second two sentences do a great job of actively describing the scene. I wonder if you could cut this first one?] Pretty picture as they paint, these structures can’t hide the dirty factory walls and apartment buildings that loom from all sides. Monorail tracks crisscross overhead, beneath the “safety” of Dome 1.

I hate the domes. I hate the way I shudder in cold sweat every time I look up and see rafters instead of sky, hallucinating cracks that run through the hexagonal slabs of masonite. I don’t want to die entombed in one of humankind’s last Sanctuaries, like a bee in a smashed hive. I don’t want to die like Maddie. [Okay, this is really great. I love how you’re giving us hints of information that make me want to keep reading to find out how Maddie died and what a collapse means in this world.]

I survived one collapse. I won’t survive another.

As the crowd thickens, I search people’s hands one by one. Callouses, broken nails, and grime-stained fingertips of factory employees, mechanics, and construction workers. Not what I’m looking for… There. The woman with the stringy bun of gray-streaked hair. Purple crystals freeze her fingers at grotesque angles and extend all the way up to her elbow. From there, silver threads carve through her bicep like veins of mercury. Her skin swells around the threads as if infected.

[Overall this is a really effective first page for me. The writing is strong, as is the world building. My main suggestions here would be reducing any telling as much as possible and allowing Jaylie’s interaction with the scene to show us those things. Well done! Again, thanks for sharing your work with me and the Pitch Wars community!]

Thank you, Laurie, for the critique! We are showcasing three mentor critiques each day leading up to the Pitch Wars 2020 submission window, so make sure to read the other two critiques for today and come back tomorrow for more.