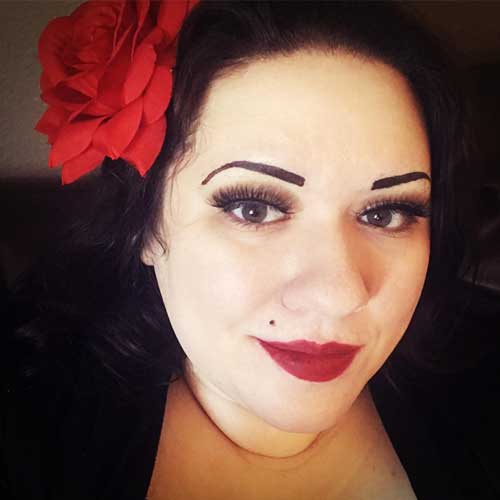 Kerbie Addis is a librarian and an intern for a major literary agency. She is represented by Bridget Smith of JABberywocky Literary. Kerbie has always worked or volunteered in bookstores and libraries, occasionally venturing into horror theory and presenting on panels at academic conferences. She was the marketing director for an indie bookstore, but left to finish her master’s degree in library science at Texas Woman’s University. Kerbie lives with her husband and a dog too fluffy for her own good in Philadelphia. She is an avid collector of vintage tea cups, crystals, and Halloween decor. Oh, and of course, books.

Seventeen-year-old Clara Marie Stahlbaum lost everything when her father died and Nuremberg fell to Napoleon’s troops on the same day. Ten years later, [I think her age can be made clearer. Was she seventeen when all this happened, or was she seven? The ten years later means she could either still be seventeen or twenty-seven.] Clara is a cynical, angry funeral singer [I think you can do more with this juxtaposition. As it is right now, I imagine her singing angrily, which I know isn’t the case. Is there another way you can fit these pieces together? I like the idea that she’s bitter about her father’s death and still has to sing for other people’s funerals, is there a way to incorporate how she feels about that? Did anyone sing for her father’s funeral?] who steals people’s feelings [Not sure what is meant by this—do you mean she seduces people, or that she pisses them off]  as often as their purses. When she isn’t making meager money for her penniless family, [What family is left?] she turns to more vices than virtues.

When she is caught stealing by occupying French soldiers, they threaten her: [The cadence here is off, maybe say they give her an ultimatum?] give them an astronomical sum of money within a week or have her kind twin brother Fritz [Her twin should probably be mentioned in the earlier paragraph with her family. Also, how do the soldiers know about her twin brother? I’m assuming this was a random act of thievery, correct? And why threaten her brother and not her?] sent to the frontline. Determined to have him shipped off to America for safety instead, Clara is driven to do anything to protect him – even sell his Christmas gift for her: a familiar old nutcracker crafted before her father’s death. [I like this, but it’s a little confusing. Who carved the gift, her father or the brother? If it was carved before the father’s death, why is it only just now being given as a Christmas gift?]

Clara’s plans are thwarted when she is chased [Who chases her? The French soldiers she robbed?] into an old theatre with the nutcracker and is magically transported to Belvodya, an enchanted land with its own tyrant. [ Cut, we can gather that it’s enchanted since she teleported magically, and the tyrant part can be moved to the next sentence to help with the flow of the sentences.] There she meets a rebel group hell-bent on overthrowing him [cut and replace with “their own tyrant”] and is offered a second [What was her first option? Selling the nutcracker? If that’s the case, you should pair the selling of the nutcracker with the word “option” so we know what that matches to]  option: join their team to [Cut this, it’s understood she would be joining them] find and awaken the legendary nutcrackers in exchange for revenge on her father’s murderer.

With many options in front of her, [Cut. There’s not many options; there’s really just two.] Clara must ultimately make a choice: return to Nuremberg, quickly make money, and keep her brother away from the same fate as their father or stay in Belvodya, overthrow the tyrant, and enact vengeance on the one who stole her life away ten years prior. [I think the choice here is actually quite obvious, so you might want to throw in the consequences of the more likely choice. If she helps in Belvodya, does she know what happens to her brother? What if she can’t return home? There needs to be doubt case on the “obvious” choice so there’s higher stakes in picking it. Also, I would either split these sentences in two or incorporate a dash to make these options clearly separate. Remember people will read queries quite fast so you want to make it as easy visually as possible.]

My story, Title, is a spin on the fairytale-turned-ballet The Nutcracker and influenced by the Napoleonic Wars. It’s a dark fantasy [Loving this concept by the way] completed at ### words and is perfect for fans of Holly Black’s The Cruel Prince and S. Jae-Jones’ Wintersong. [Good comp titles]

I am a 2017 graduate of the University of Georgia with degrees in History and Mass Media Arts and a current Copywriting student at the Creative Circus. I’ve been published in The Atlanta Journal-Constitution, Epic Reads, SheReads.com, Frolic, The Young Folks, Paste Magazine, and more. Per submission guidelines, please find the first ### pages of my manuscript below/attached.

Memories steal [I understand that using “steal” here is a voice choice, but try reading this out loud. It doesn’t slip out smoothly because “Memories” ends with an s and steal starts with it. I know that’s nitpicking, but starting with something that could be a verbal stumble should be avoided.] into my mind in flurried spots, each a twinkle of a bell. Like a horse-drawn carriage materializing out of the dark street and into a gas light’s bright halo, [I like this, shows time period and world immediately] they start soft and slow before sharpening their high-pitched notes. [I’d be wary of mixing metaphors here. The horse drawn carriage metaphor is good because it gives us a sense of setting, but alluding to the memories as sound doesn’t quite fit with that same metaphor.] The smell of lebkuchen smarts my nose and my mouth waters as it desires the cookie’s spicy cardamom, cinnamon, cloves, nutmeg, anise, and without a doubt, ginger. [Another good worldbuilding detail]

These memories speckle into view, a snowstorm of white slowing down to observe the cobblestoned forest. The bells slowly accompany violins and other stringed instruments while one grand, miraculous tree grows to tower high above me. There are children with high pitched laughs that rival the bells; they clap and watch my godfather’s dolls dance as their parents drink and be merry. [What memories, plural? In the paragraph above, you’ve only shown one memory, which is the cookies. Here I’m getting confused because while the above paragraph made the bells and carriages come across as metaphors, now it seems like they’re literal memories? I understand the prologue is supposed to come across as dreamy and literary, but there really can’t be room for confusion when your story starts.]

But there is a shadow that threatens the tannenbaum’s candle flames, and the melted beeswax shivers as it descends down their [Maybe say the tree’s, to define tannenbaum for the reader] stems.

A letter, white as a skeleton’s bones, sharp as a mouthful of teeth, is lowered. [Lowered from where?] And I attend through the glass windowpanes as my father steps into the horse-drawn carriage, his black and blue uniform as fresh as a new bruise.

But a king, as tall and shrewd as a rat, commands his forces and my father and all of Nuremberg fall on the same day. Both fail to rise, no matter how much I pray. And beg. [I feel like this note is anticlimactic, considering how impactful this should be to her. It feels like a footnote here.]

The bells shriek and precipitate until they are faster than the palpitations of my heart as his black casket is pulled from the horse-drawn carriage. Red chrysanthemums litter the ground like fresh blood splattered upon the snow. Their scent smarts [You’ve already used this word earlier for smell, so I might suggest finding a synonym] my flushed nose and I hold up my handkerchief so I can no longer detect them, so my brother and mother do not see the tears streaming down my face.

The soil I hold is like a rock in my hand. It is firm from the winter and jagged with my pain. [Really love the sensory details here] The bells beat with each breath I take. They grow louder and louder, and my eyes close to shut them out. [I’m confused as to where the bells are coming from. I thought they were on the horse drawn carriage, but if the casket has already been removed, what is moving the bells?] But I release a breath, I release the soil and the bells silence their consistent drubbing.

The soil falls, and as it caroms against the black box, it drums like the gavel dismissing us from our home, like the bang of doors as we look for shelter. Like the gunshot taking my father’s life. [This paragraph is quite good.]

But I know now, ten years later, when winter comes and the bells arrive, I know now [cut “I know now” because it’s unnecessarily repetitive to the beginning of this sentence] how to combat the memories, make their gas light’s halo darken. Make them flurry away in a frozen snowstorm.

But I also know the pounding haunts me: it lives in the coldest crevices of my mind, my soul. It was not just a handful of soil, a gavel, a gunshot; it was the child-like part of me, innocence within my heart that snapped. [Excellent callback to the paragraph above.] It shows in the scowl lines etched into my face, I feel it in my clenched jaw as I bite down and ball my fists.

So every winter when the bells come around and I shove the memories deep down into the center of my soul, I remember. Like a fresh bruise, I remember.

And so I steal from them. [What an impactful ending to the page! I think this might have a shaky start, because it’s trying to incorporate both a literary voice and introduce small worldbuilding elements. Remember that you can do both, because a person in this timeframe/setting would only use certain metaphors that make sense to them, so we’ll understand that even metaphors can be worldbuilding details. Be cautious of mixing metaphors, and of mixing up the characters’ realities with those metaphors, because it can make the read a little confusing. All in all, though, this is a very intriguing page, and something I’d see myself requesting if I was mentoring this year.]

Thank you, Kerbie, for the critique! We are showcasing three mentor critiques each day leading up to the Pitch Wars 2020 submission window, so make sure to read the other two critiques for today and come back tomorrow for more.