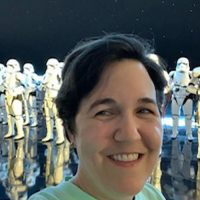 Nanci Schwartz is a document editor by day, a science fiction author by night, and a mom 24/7. Her novel Robber Barrons was selected for Pitch Wars in 2018 and is the first installment of a forthcoming trilogy (Aethon Books). In her decreasing amounts of spare time, she can be found gallivanting around the Walt Disney World theme parks, chatting about her favorite space opera movie franchise, or taking refuge from the heat in her pool. She lives near the Happiest Place on Earth with her husband, son, dog, and cat. 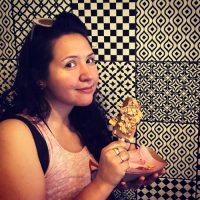 LL Montez is a writer, reader, stargazer, mediator, and mama. She has published short fiction in sci-fi, fantasy, and magical realism, and is currently on submission with her Pitch Wars ’18 manuscript, ARC10. When not crafting hopeless romance in the alien apocalypse, she enjoys aerial yoga, dairy-free ice cream, and Chicago summers with her husband and kiddo. 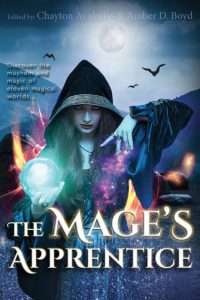 “Estrella Falling” can be found in The Mage’s Apprentice. a young adult fantasy anthology about mage magic going awry. Featuring eleven stories by best-selling and award-winning authors, The Mage’s Apprentice will take you to fantastical realms, new dimensions, and across time, exposing the secrets of magic. In “Estrella Falling”, the three brujas traveling on a comet orbiting the Earth have always granted the wishes of the people on Earth. Disaster strikes when their apprentice decides to break the rules and make her own dreams come true.​
Buy Now

Arav has six months to become a god, to prove himself worthy to the heavens. [There is a lot of WOW FACTOR here, so I imagine these two lines are your hook, but without stronger context, the reader doesn’t get the same effect. The audience might not connect with Arav because we don’t know what’s at stake here. Why does he want this? Are the current rulers cruel? Have they persecuted him or his family?] After a lifetime of being dismissed and underestimated, he’ll finally show the world what he’s capable of. [How so? Specifics are super important in a query. This doesn’t tell the reader much and takes up valuable word count. By explaining who is being dismissive or who is underestimating Arav, it might help!]

Every 200 years, nine new avatars of the gods are chosen around the world during the celestial alignment. As the alignment approaches, the current rulers of Ciryan, descendants of the city’s three previous gods, cling to their power more fiercely than ever. [I love the idea behind this!! What a cool world you built. This could definitely hook the right agent, but try to condense the backstory and use only what will serve to give context to the pitch. The first sentence here is the strongest. Condense the rest to tell us Arav’s goals. Then clarify his stakes.What happens if he doesn’t get what he wants?] But Arav is ready to force change.

Officially, Arav is a bureaucrat [this might just be me, but I’m really put off by this character if he’s a bureaucrat—even part time. There’s a lot of negative connotation, making him an unsympathetic character from the start. Maybe include language that would make him more sympathetic? “Officially, Arav stands with the biggest baddies in the Ministry”<—lame, but something that distances him a little from the villains.] in the Ministry of Development. In secret, he’s doing everything he can to undermine—and ultimately overthrow—their rule, from bombing ministry buildings to constructing schools in the more neglected parts of the city. [Very cool! I think this should go at the front of the query! This is really interesting and demonstrates Arav’s goals. But I have to say, it feels like you’re almost pitching two different stories. At first, you’re giving us the quest and the wouldbuilding. After that, you tell us about the characters. Try weaving them together! End it all with some awesome stakes.]

A high priestess comes to Ciryan with her own designs on power. Her followers want to persecute the inscribers of the city—the so[-]called gem witches—putting the people Arav cares about most in danger. [Not understanding how the inscribers are related to Arav. Perhaps simplify it for the query? Also, since the high priestess is the antagonist, specify what she wants other than power.]

When the priestess begins interfering with Arav’s plans, he grows more desperate and his actions become reckless. [How so?] Soon, his allies start turning on him. [This is the tricky part of double-life characters. Which allies are turning on him? The politicians? Others? And why? Does he get them killed? Hurt?] As he begins to doubt his quest for greatness [is that all he wants? Greatness? It might be hard to connect with someone who only wants power—tell us what’s REALLY at stake! Why does he ACTUALLY want to be a god? We still don’t get it], Arav is forced to ask himself if the price of godhood is worth the consequences. [This is a great inner conflict, but it’s lacking specifics right now that would really clarify the stakes. Make sure the query answers several questions: What does Arav want, what is he willing to do to get it, what/who is opposing him, what are the stakes if he doesn’t get it]

TITLE is a 100,000 word Adult Fantasy inspired by South and Southeast Asian mythology and culture. [Screaming!!!! Love it] Fans of the world building in the Mask of Mirrors and Jade City would enjoy this novel. [Good comps! Note that some agents really like the comps first. Just some food for thought. I think this would give your book great context!]

The island’s humidity strangled Arav almost as tightly as his nerves did. [Good start! I love sensory hooks]  Atop the grand balcony of the old ministry building, overlooking the masses of Ciryaners, were the three scepters—the authority of the city [I feel like there’s an opportunity here to make stronger imagery. I would love to know more about this building and these people–are they an angry mass, a starving huddle, a celebratory group? What does it sound like to overlook them? What does it smell like? Are they rich and perfumed? Or are they dirty and unwashed? How high is the balcony? Is it big? Made of stone? Things like this. Also, frame this in Arav’s POV.]. For nearly two hundred years, their ancestors had stood in the same spot, where they could watch the parade in honor of three people who’s [whose] deeds and stories had been blown into legend.[recommending an em dash here] Legends that Arav had grown up in awe of written in a book that he so desperately wanted to belong in. The Tales of Gods. [The first two sentences are strong! They put us with a character and into a place, but after that, you go into exposition. Keep us in action, that will hook your reader in]

Two hundred years was a long time for a city to grow, and the old ministry building had lost its original function. Now, it was used ceremonially, to host foreign dignitaries and important visitors. But the building was still a symbol of the past and its importance to the present, a representation of stability. And if Arav, a poor Nashari boy born under the protection of a banyan tree in the light of an inauspicious moon [comma] was to become a god, he would need all the chaos he could create. [The last sentence is strong and puts good focus on Arav, but the beginning of the paragraph is all exposition. Also, I’m confused at how Arav creating chaos relates to this building.]

From his vantage point, Arav couldn’t see [try to avoid filter words like “saw” or “see”, especially in your first page] the bored faces of the scepters. He stood at the back of the balcony, behind the ministers, with the rest of the senior bureaucrats. [I suggest cutting out everything after the first two sentences and starting back up again here. Let the backstory come later. What will grab us is action, dialogue, and momentum. Set a scene–give us sensory details like what smells, sounds, sights, or textiles are in his space. After all this exposition, I forgot where he was.]

The building began to shake, ever so slightly. Enough for a few of the bureaucrats and the ministers who weren’t too drunk to look at one another and frown. [love this–it creates a great picture of who they are] A woman from the Ministry of Treasury whispered to Arav, “What was that?” [If you cut out the exposition, you can add tons of incredible details that I know you have. You’ve hinted at the grandeur of the ministry buildings, so showing us some and setting the tone for how we should feel about the ministry in the first page will get us hooked. Then, instead of leaving at someone else’s dialogue, give us a cliffhanger! What would grab us and make us want to read more?]

Thank you, Nanci and LL, for the critique! We are showcasing three mentor critiques each day leading up to the Pitch Wars 2021 submission window, so make sure to read the other two critiques for today and come back tomorrow for more.