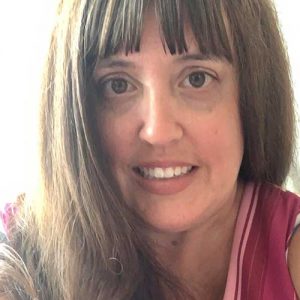 Heather Van Fleet is a stay-at-home-mom turned book boyfriend connoisseur. She’s married to her high school sweetheart, a mom to three girls, and in her spare time you can find her with her head buried in her Kindle, guzzling down copious amounts of coffee.

Heather graduated from Black Hawk College in 2003 and currently writes Adult contemporary romance. She is published through Sourcebooks Casablanca with her Reckless Hearts series and Bookouture with her Red Dragon series. 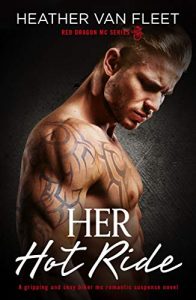 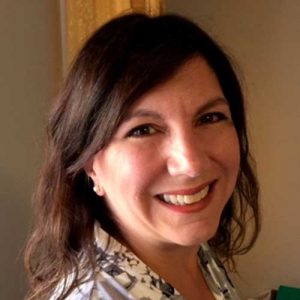 Jessica Calla (THE LOVE SQUARE, The Sheridan Hall Series, MAPLE SUMMER WALLACE, The Mill Street Series) is a contemporary romance and women’s fiction author who moonlights during the day as an attorney. If she’s not writing, lawyering, or parenting, you’ll most likely find her at the movies, scrolling through her Twitter feed, or gulping down various forms of caffeine (sometimes all three at once). A Jersey girl through and through, she resides in the central part of the state with her husband, two sons, and dog. 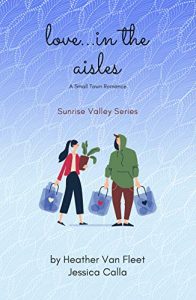 On a scale from one to ten on the epic failure charts, Charlotte Dawson’s day just passed an eleven.

The last thing Charlotte wants to do is go to the supermarket, but with a four-year-old to feed, she doesn’t have a choice. Just when she thinks she’s free and clear of marketplace drama, Charlotte finds herself in the throes of a hide-and-seek game with the nosiest woman in town. And if that wasn’t enough to add to her bad day, the hot new bag guy catches her hiding out…in the liquor section…on a Sunday in the South. But she can’t formulate the words to tell him to get lost. In fact, she can’t speak at all once she gazes into those hazel eyes.

Having been ditched at the altar by his long-term girlfriend, Hollywood sensation Ian ‘Cleary’ Tate escapes to Sunrise Valley for one reason—peace. Serving as a temporary apprentice under his stepfather at Adler’s Market is the perfect cover—nothing says redefining his life like a little manual labor. Until he runs into a problem…Charlotte Dawson, the widow of the town’s biggest hero. He in no way expected to develop a fascination with the bumbling, yet refreshing, young mom, who just so happens to have the grace of a one-legged chimpanzee.

In a series of unexpected encounters between the aisles of the supermarket and the gossip-filled streets of Sunrise Valley, Charlotte and Ian get to know one another, Georgia style—all under the watchful eyes of a group of meddling old women known as the GOLs (Gossiping Old Ladies).

It’s not easy falling in love after heartbreak, but Ian and Charlotte have a chance at exactly that…if Ian’s secret Hollywood fame and Charlotte’s former life don’t get in the way first.

BOOK TITLE, complete at 96,000 words, is upmarket women’s fiction in which a GenX resister turned frustrated government IT specialist confronts her former friend and business partner turned Wall Street banker when they both vie for delegate seats representing Bernie Sanders at the 2016 Democratic National Convention. [This feels more like a closing paragraph rather than a beginning. Depending on the style of query an agent prefers, I would move it down below as paragraph 2. HVF]

Fifteen years after her husband and best friend colluded to steal and sell her tech start-up, Holly LaBrecque has rebuilt a secure life in a historic home with a pensioned job and casual lover. [Great intro line. Gets right to it.] But when a Bernie Sanders campaign kick-off reignites her social justice passions, Holly jumps to the center of the grassroots effort in Albany, New York. Only, [Personally, the word ‘only’ doesn’t work here to me. I’d try something like “The problem is… instead] she has no idea how to campaign. [When you say campaign, I’m unsure exactly what you mean. As in, confused how to become involved? I’d be more specific. Give examples as to what she wants to do, then show how she’s going to achieve them.] Learning that in a toxically political town is the simple part. The hard [rep] part: campaigning for the disfavored candidate threatens her hard [rep]-fought life. To succeed at both, she must turn to the people who betrayed her [We’re confused as to why she has to do this? Are they part of the campaign? Definitely clarify] and accept that satisfaction may not look as imagined.

My writing has appeared in several journals and has been nominated for a Pushcart Prize. I’m also a member of the Women’s Fiction Writers Association. By day I am an environmental scientist and lawyer. By night I write and somehow wound up at the 2016 Democratic Convention as a Sanders delegate. [Nice closing paragraph!]

We’re very intrigued by your query. It definitely makes me want to read onto the pages. Our only thing is, other than what we’ve noted, is that the stakes are a little weak as far as why she needs to turn to the people who betrayed her.

Holly LaBrecque pedaled hard. She was late for [her sister?] Fern’s event. Not intentionally, but Fern would still be pissed; her ability to fathom Holly’s time-losing absorption in tech issues [This was confusing to me “time-losing absorption”- maybe “Holly’s tendency to lose track of time”?] was no better than in their teenaged years. Holly had only agreed to host because of Fern’s desperate begging. Suspiciously desperate. Fern’s calculating had escalated since Mom died and anguish wrapped them in its unrelenting grip. Even more reason for Holly to resist inviting dozens of strangers into her cocoon. Maybe her lateness had been on purpose. [Maybe you mean here that her lateness was subconscious? If it was on purpose then she meant to be late.] Her mind was hard to know when it went to that angry place that tallied forty years of injustice. [Oh boy, forty years of a grudge in sisterhood!]

The bike’s tires whooshed and wisps of her hair blew loose from the reflective yellow helmet. She crossed Swan Street and sped into the gully of Albany’s Madison Avenue that dipped through and under the Empire State Plaza. As she passed the State Museum’s bulky, brass-framed rotating doors, an exhibition banner flapped loose from a man’s grip while he attempted to hang it. Holly glanced from the road to read the advertisement [What did it say? She had already been looking from the road because she saw the banner being hung- so she’d already “glanced from the road” prior]. Then, hearing the bells from the Immaculate Conception Cathedral, she returned her attention to the road—too late.

A Nissan crossed Madison at its intersection with Eagle Street, the collision inevitable [would she know it’s a Nissan in a split second? Did she come out of the gully onto Eagle Street?]. Holly prepared to roll over the hood by tucking her chin and falling as her dad had taught her when she was eight [Maybe: Holly tucked her chin, like her dad had taught her to do in case of a fall, as she prepared to hit the hood.]. She landed chest-first on the hood’s hot metal; her heart beat[ing] at the same speed as the vibrating engine. She scanned her body for pain [I think she would scan for injuries- she would feel pain.] Smudges of color blurred past. Some [some what exactly? Smudges?] with drivers yelling obscenities.

Finding herself intact, she pushed herself to standing [First, she has to get off the hood.]. In spite [of] July’s humidity dampening the curve of her lower back, her fingers and arms shook from the chill of her bungling. [Maybe add some emotion- is she shaken? Hurting? Freaked out?]

[Great start for your story! I love the action. Poor Holly! I’d love more detail about the event Holly is hosting at her sister’s request. I assume it’s a political event, and that the banner at the state museum is a political banner? I’m wondering why Holly would agree to host if she doesn’t trust Fern, and why she’d be concerned about getting there on time if she thinks there is a nefarious purpose to the meeting. Of course I only have one page, so I wouldn’t know those things! Maybe I’d suggest putting something in that will let the reader know we are in 2016 at election time? I know you mention July, but not the year. Maybe by giving more detail about Fern’s event, you can also give the reader the time frame.

Hope these comments help! Good luck with everything Jess and Heather]

Thank you, Heather and Jessica, for the critique! We are showcasing three mentor critiques each day leading up to the Pitch Wars 2020 submission window, so make sure to read the other two critiques for today and come back tomorrow for more.