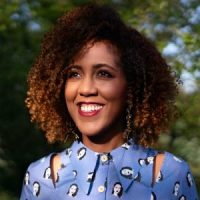 With a DNA profile that lights up like a satellite photograph, Saara El-Arifi’s heritage is intrinsically linked to the themes she explores in her writing.

She was raised in the Middle East until her formative years, when her family swapped the Abu Dhabi desert for the English Peak District hills. This change of climate had a significant impact on her growth—not physically, she’s nearly 6ft—and she learned what it was to be Black in a white world.

Saara knew she was a storyteller from the moment she told her first lie. Though her stories have developed beyond the ramblings of a child, she still appreciates the thrill of a well-told tale. 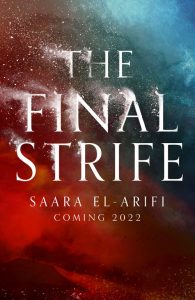 Stolen from her noble crib as a child, Sylah was one of ‘the Sandstorm’: 12 Ember children raised by rebels to one day bring down the empire — until a massacre left her the lone survivor.

Years later she spends her days numb from addiction, fighting (and winning) in the ring to fund her habit. But when her long-lost stepbrother returns, determined to fulfil the purpose they were trained for, Sylah is caught between her blood, and her loyalties.

Forced to confront everything she has run from, and the truth of her past, can Sylah achieve the destiny she was trained for?

In [It’s] the 37th century, [and] something monstrous [is watching] watches humanity from beneath Saturn’s skies. [These slight tweaks make the opening sentence more immediate and atmospheric, pulling the reading into the world you’ve created straight away.]

[I generally recommend you pull up the section regarding title, genre, word count and comparisons, like follows. An agent doesn’t want to go fishing for this information amongst the email. This would also be the section where you would add tailored words to your preferred agent. E.g. why you want to work with them, why their list inspires you etc.]

Book Title is a debut standalone [adult?] science fiction novel complete at 122,000 words that combines the Lovecraftian mystery of Alastair Reynolds’ Revelation Space and the court intrigue of Frank Herbert’s Dune. [Nice. This shows you clearly know the market and where your novel fits into it commercially. Consider adding a sentence that also shows how your novel can stand out in the market.]

[Then, back to the plot]

Jadis Selene is a young aristocrat exiled to the ruins of Earth, still haunted by the night her parents were assassinated and her family overthrown. Now she dreams of revenge. When she stumbles upon the Historia,[no need to name] nanotech that assimilates human history into one’s memory, she sees a way she might return to power. With a group of unlikely allies, she sets out on a quest to overthrow House Phazania [no need to name], the family that stole everything from her.

But the [nano tech] Historia isn’t a mere account of the forgotten Golden Age; it’s self-aware and has an agenda. As it integrates with Jadis’s brain, she discovers the dark secrets of humanity’s mythical past and the truth about the world she thought she understood – the same truth that [her parents were murdered for] Lord Phazania killed her parents to discover.

What was once [starts of as] a quest for revenge draws Jadis into an ancient conflict that ties together the Historia, palace intrigue, and a thousand year experiment for apotheosis [simplify]. Pursued by the sins of humanity’s past, Jadis and her newfound comrades must confront something insidious and godlike in the cold reaches of the Solar System.

[A lot of information in this section and a lot of new concepts for the reader to get their head round. Try and pull back on the information overload. You don’t need to describe every element only the function it plays in the plot. Make it simple and clear. E.g. Jadis discovers nano tech on earth that warps past memories].

Before writing this novel, I was a Finalist and Silver Honorable Mention in the Writer’s of the Future Contest. I graduated with a Master’s Degree in History and dual Bachelor’s degree in History and Classics and I am now a high school history teacher. The full manuscript is available upon request. Thank you for your time and consideration.

[Strong query, just pare back some of the information and you’ll have a really intriguing query to entice agents with]

Jadis Selene was not a good woman; at nineteen, she was barely a woman at all. [Really love the first part of the sentence, but be aware semi-colons are much debated topics in the literary world, so my recommendation is to avoid using, if you can. However, the ‘barely a woman at all’ phrase would make me pause as a reader, it doesn’t seem like something the character would think. Consider rephrasing.]

She trudged through the snow. Her thick, oversized military greatcoat weighed down on her thin, aristocratic body [If aristocrats are genetically different, then this needs to be explained or it comes across a little crass] and she stumbled on her bad leg. She hated Earth, its gravity, and its thousand-year winter. But most of all, she hated its people. Low class, barbarian, genetically deficient. Exile had dragged her down from the palaces of Luna, the heart of civilization, to this frostbitten hell.

[Just note on formatting, you don’t need paragraph spaces, take a look at shunn formatting, which is standard, here: https://www.shunn.net/format/story/]

She followed Phineas Holcomb, a man who was her keeper, boss, and self-styled archaeologist. [What does he look like? And how does she feel about him? Remember, voice is important.] He led her through the broken streets of what was once Boston. In ancient times, during the Americana Empire, the surrounding ruins had been glittering towers of a world metropolis, bursting at the seams with millions of people and a dazzle of light. Now, that lost Golden Age was buried under layers of myth after centuries of war. [So, what does it now look like now, other than broken?]

Holcomb looked back with a half-smile as snowflakes fell.

“You say that every time.”

“No, this time is different. I can feel it.”

Holcomb wasn’t the only archaeologist picking through Earth’s ruins, but he was the worst. For as long as she had known him, he had never found anything worth finding. He stood there, smiling at the drifting snowflakes, and removed a glove to catch one. The delicate crystal glittered in the daylight. Dim hopefulness glowed across his face as he marveled at the world’s small beauties. It was that kind of whimsy she despised. [Nice, clear voice coming through here, I’d pepper a few more moments like this throughout].

Thank you, Saara, for the critique! We are showcasing three mentor critiques each day leading up to the Pitch Wars 2021 submission window, so make sure to read the other two critiques for today and come back tomorrow for more.