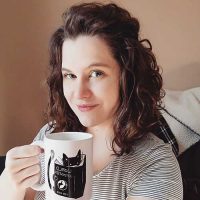 Shannon A. Thompson is the bestselling author of the Bad Bloods series and the Timely Death trilogy. Represented by Katelyn Uplinger at D4EO Literary Agency, Thompson’s work has appeared in numerous poetry collections and anthologies. When she is not writing, she is climbing rooftops, baking cookies, or watching KDramas in the middle of the night, often done with her cats by her side. During the day, she is The Story Center Program Manager for the Mid-Continent Public Library. Thompson graduated from the University of Kansas with a bachelor’s degree in English with an emphasis on creative writing. 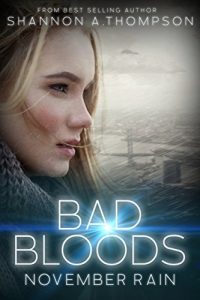 Seventeen-year-old Serena isn’t human. She is a bad blood, and in the city of Vendona, bad bloods are executed. In the last moments before she faces imminent death, a prison guard aids her escape and sparks a revolt. Back on the streets determined to destroy her kind, Serena is spared by a fellow bad blood named Daniel. His past tragedies are as equally mysterious as her connection to them.

Unbeknownst to the two, this connection is the key to winning the election for bad bloods’ rights to be seen as human again. But Serena is the only one who can secure Vendona’s vote. Now, Daniel must unite with her before all hope is lost and bad bloods are eradicated, even if it means exposing secrets worse than death itself. United or not, a city will fight, rain will fall, and all will be threatened by star-crossed love and political corruption.

The people of Gala Mor haven’t made much of their prince, not until he slays the shadow beast terrorizing their kingdom. [Start with your main character first. In this case, Garou. Tell us how he feels about the people disregarding him. Did he slay this beast to gain their respect? What does that mean to him?] But in so doing, prince Garou inadvertently sets free an entity trapped inside the beast’s belly. [Love unexpected consequences!] This ancient wraith bewitches the king into strangling his own heir on its way to conquer the continent. Eluding death at the hands of father and his men’s subsequent pursuits, Garou flees into the outer reaches and stumbles upon a mystic race of elemental beings called woodlings [did he know about the woodlings before, or were they unknown to him previously?], whose aid he must enlist [why must he enlist these particular people (rather than someone else)?] to expel the dark force corrupting his father king.

With the king’s legion at his heels, Garou takes sanctuary in a forest and frees a guardian bird in a hunting accident. [how does the first sentence of this paragraph relate to the last paragraph?] This incident catches the attention of the woodling resistance, who recruits Garou and his guardian to wage war against the king. [This feels a little out of order since we’ve already seen the woodlings mentioned. I suggest bringing the first instance of the woodlings here.] If he’s to restore peace and save the king from the waxing influence of the wraith, first must he [reword this: he must first] resolve himself to take on [“Take on” in what way? Kill him? Usurp him?] his own father, even at the risk of capture or death. Then must he master his guardian’s elemental powers in an island adrift among clouds [why an island in the clouds? Also, how is Garou learning this and how does he feel about these lessons?] and venture thereafter into enemy territory in search of the master of the woodlings, without whom the resistance stands no chance against the bewitched king. [I’m confused by the order. It sounds like he must fight his father, then leave to get someone to fight his father again. Clarify order.] Should Garou fail, his father’s soul would forever be lost, and woodling and humankind alike would suffer unprecedented genocide.

TITLE is a young adult epic fantasy complete at 91,000 words. It might appeal to fans of E.R. Eddison’s The Worm Ouroboros, Ursula Le Guin’s A Wizard of Earthsea, and the animated show Avatar: The Last Airbender. Thank you for your time and consideration.

[Overall, this sounds like a very exciting book! Though saving the world is certainly commendable, I would’ve liked to have seen Garou’s personal motivations threaded through more. In this case, it sounds like he truly wants to save his father, the king, which is really fresh since many prince/king stories involve the prince wanting the throne for himself. Maybe thread that personal motivation in throughout. I also felt the overall sequence of events was a little off. Make sure each sentence naturally leads to the next, and I think you’d have a much more solid query!]

CHAPTER ONE – THE KING’S SON

Unto the King of Gala Mor was born an heir before the days of ruin came [I’m stumbling over your first sentence; try to reword and avoid the passive tense (“was”)], a son whose mischief it was that led to the resurgence of an ancient race, of powers hidden in the world, of glyphdrafting and magic. When the boy was young, whilst he was four and clueless of the dangers of fire, little Garou threw a tantrum because his queen mother forbade him to go near a crackling hearth, and so in secret lit a candle to indulge his fascination for things ablaze. [This caught my eye! Consider starting at the first bit of action. Take us right to it. The description of fire. Why Garou is drawn to it.] Wishing to dye Mother’s golden hair red as punishment (her least favorite was red), the little prince snuck from behind and fed her hair to the candle’s tiny flame. The boy applauded as Mother leapt from her seat and jiggled, for he had never seen her dance so frenzied before, like one bewitched in spellbound music. Garou stopped once Father came and doused the flame with a bucket of water, and when Mother broke down in tears it was then that Garou remorsed. “No cry, mama,” said he in his innocence, “no cry.” At once he laced his wee arms around her neck, and that endearing gesture alone the fire–dyed queen regarded as the greatest prize she ever won in life [had they never hugged before? If not, why? What’s changed? What does it mean?]. In the years that followed, never again did Garou commit such awful deeds as might make Mother cry, thenceforth until the last of her days, when consumption, not fire, took her away from his loving arms.

In his adolescent years Garou still took to heart that grievous loss and his anguish fell on darker days, for ever since Mother died, he gave himself over to deviousness and roguery, all to fill the gaping void in his heart. One morning in fact, after spending the night in the woods, Garou snuck back into the palace with dung caked all over his rump. His poor nose suffered in horrid stench, in such wise he feared it would no longer relish [Overall, this feels a lot like a prologue that’s focused on the backstory of the main character’s childhood that could be threaded throughout the story.]

Thank you, Shannon, for the critique! We are showcasing three mentor critiques each day leading up to the Pitch Wars 2020 submission window, so make sure to read the other two critiques for today and come back tomorrow for more.