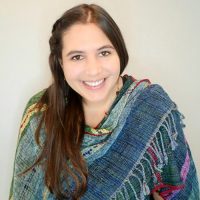 Annika writes Young Adult and is represented by Rick Richter at Aevitas Creative Management. She was a 2020 Pitchwars mentee. She grew up in Virginia, but now spends her days in Atlanta, GA, doing research for her Ph.D. or writing her books. When forced to, she occasionally leaves the fantastical worlds in her head to spend time with friends and family, travel, or rant about climate change.

I’m reaching out with this submission because I thoroughly enjoyed your latest Pitch Workshop and your unapologetic love for all things Star Wars. Have a seat, buckle in, and let’s go on an adventure.

A pilot without direction. A con seeking the truth. A secret that could save the galaxy. Or rip it apart. [I liked this initially—voice-y and hook-y. But then I was reading the query and it didn’t seem to quite fit I had trouble matching it to the introduced characters. The pilot has direction (revenge goals) and the con is seeking his ship, right? I like the style, but perhaps a bit more fitting descriptors so I immediately match the pilot and the con with the paragraphs below.]

With an itchy trigger-finger and emotional trauma darker than a black hole, seventeen-year-old pilot, Wren, has her targets locked on avenging her father’s death. [This is an excellent introductory sentence! Great voice, great characterization. If you’re struggling with edits to the above paragraph, you could probably start here and be fine.] Raised on the outer rim of a Terran colony under the guise of a boy [why was she under the guise of a boy? I would either clarify “under the guise of a boy in order to xxx” or leave that out completely to avoid the confusion and I think the query flows either way], Wren is no stranger to doing what needs to be done for survival. And the only way to survive the heartbreak of losing her father is to make space pirate, Merik Trasel, pay with his life.

After being left for dead as a child on a hostile mining station by his own father, eighteen-year-old Merik has perfected the art of stealth and thievery. Second only to piloting half-dead Starjack warships and bad decisions. Those are absolutely not related. [I like the voice here but I got a little tripped up with the sentence structure. Maybe add in so it’s “making bad decisions”? But both are treated as singulars but give two examples. It could also be edited to “perfected the art of thieving Starjack warships. Second only to his tendency for making bad decisions. Skills that are absolutely not related.”] Speaking of bad decisions—and poor translations because of a speech impediment—Merik is on the hunt to steal back his beloved ship before the bounty on his head is collected.

When a chance encounter lands Wren and Merik in the line of fire (literally), they must put aside their differences in favor of their lives. Once aboard the Charlatan [Too many names in queries can bog down the query. This paragraph introduces two new names at the end of a query, which I think might be too many. I would cut the ship name and instead use a descriptor of some kind, like “Once aboard Merik’s freshly stolen ship”] with the rest of Merik’s crew, things quickly worsen. Not only is every space pirate out to collect Merik’s head before Wren can remove it herself, but the galactically feared Run’Gat has set their sights on the Charlatan crew. Renowned for siphoning soul essence as debt payments, the Run’Gat have charged Merik with stealing one of their ships of priceless cargo.

Merik knows the cargo’s secrets and wants to out the Run’Gat for what they really are. Wren struggles with seeking vengeance for herself, or justice for the entire galaxy. Together they must race against time and stars, fears and self-doubt, to expose a secret spanning centuries. In doing so, they risk crumbling the very foundations of civilization. But to not would be even more dangerous. [these are excellent stakes and set up nicely the two competing points of view, too!]

In a Six of Crows meets Guardians of the Galaxy flare, TITLE is a Robin Hood inspired YA Sci-Fi adventure, complete at 90,000 words and told in multiple points of view with series potential. [Is it more than dual POV? The query is written in a dual-POV style and if that’s the case I would just say ‘dual’ instead of ‘multiple’.]

[As a whole, this query is brimming with voice, which I love! It has some of what I consider to be some of the most important aspects—voice and clear stakes and conflict. The rest is just polishing!]

The steady rasp of metal and coarse grind with each severed strand of my hair is deafening within the silent sub-level locker room. On the Skydeck, several levels above, Jockeys from all over the system prep for the race. A race I must win if I’m to get close to my goal. [I like the immediate setting of stakes here but I’m kind of confused about what’s happening. It’s pretty writing but I think I need a few more specifics to set the scene—is the metal scissors? What is the grinding noise?]

Nothing else matters. Not even my hair.

A glossy black coil tumbles to my lap. I brush it off, and it rolls down my leg to settle with the others at my feet. There’s enough to fill a child’s soft toy.

My cousin, Nesto, clears his throat. “Now the rest,” he says at my back, baritone saturated with wariness.

I shove the festering guilt down. He left home without telling his father, stole a commuter ship, and forged transport docs through a contact at his Interstellar Alliance internship, to help me. If he loses his IA seat, it’ll be my fault.

Unlike Ness, I don’t have any interviews or life-changing careers to worry about. [So this was specific enough I felt like I should know what interviews he has, but I thought he already has the IA seat? Maybe just leave it at “life-changing careers” to avoid raising unnecessary questions] The moment Papa died, I became nothing more than Terran colony property. [I want a few more details—even just a sentence—that explain what it means to be Terran colony property. No rights, forced to do a type of work? Why is it so bad?]  And it’s all because of a traitorous Fraedasi pirate. I will enjoy making him pay for the wrongs he caused.

There’s a flick behind me, followed by a low buzz. I exhale. Nesto hesitates.

“C’mon, Ness,” I tell him in the steadiest voice I have. It’s close. My insides writhe with anxious energy. I glance at the station clock above the door. “Your contact was very specific about timing.”

[As a whole, this is great! You establish good voice here, and some immediate stakes. I think a little more grounding in the world and you’ll have very solid opening pages!]

Thank you, Annika, for the critique! We are showcasing three mentor critiques each day leading up to the Pitch Wars 2021 submission window, so make sure to read the other two critiques for today and come back tomorrow for more.