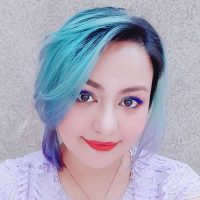 Aty is an Iranian writer, artist, translator, TEDx speaker, and a full-time writing mentor and teacher. She graduated in English Translation BA, and has been teaching writing and art for the past ten years, mentoring writers, story coaching, and judging in writing competitions. Aty introduced the first English Novel Writing classes in Iran, and is currently teaching the international standards of writing in her country. She has worked as an editorial assistant, cover artist, and art director. Aty is currently working on her manga, Daryan, and is the director and producer of one of Iran’s most popular podcasts, Yuri On RADIO. Aty has published short stories in the UK, has been a Pitch Wars mentor in the past couple of years, and was a Pitch Wars mentee with her novel Coup De Grâce.

Lilou Kardal wants nothing more than to escape the memories of her father. Daughter of the failed Hero of Light, her life and all that remains of the realm is are haunted by his actions; after all, it was her father who opened the gates of hell’s prison—unleashing infernal demons to rule the night, leaving the realm’s goddesses all but damned. [This whole part can be trimmed to something like this: ;the failed hero who opened the gates of hell’s prison, and unleashed the infernal demons, leaving the goddesses all but damned.] The only thing that keeps the people of Roen alive is the protective veil of light that surrounds the city’s wall, sacrificed by the goddesses before they fell to darkness. [Your whole hook paragraph is backstory instead of the story itself. Try rewriting it so that the inciting incident would be in the hook.]

Eight years later, the ethereal veil is failing [This is important and should be in the hook]. Roen’s regent calls for a Gambit—a set of cruel trials to find the true Hero of Light who can save the goddesses of the realm. a hero that he and the rest of the Houses of Chosen believe to be a direct descendant of their noble bloodline, Eris Kane. [Unclear and wordy sentence. Reword and keep this sentence in the second paragraph, move the rest of it to the first to make one hook paragraph.]

Drowning in the fear of being cursed to repeat her father’s mistakes [Too wordy. “Afraid of repeating her father’s mistakes” works just fine.], Lilou struggles to obey the goddess who calls for her help and finds herself among the seven chosen for Gambit. Meanwhile, lines blur between her and Eris [Vague sentence.]. Hated by [You use a lot of passive sentences. Try using more active ones.] Houses of Chosen, Lilou must overthrow those who oppress her, embrace the skin she’s in, and uncover secrets of a forgotten past [Vague again. Work on your second paragraph. This paragraph is “the story” and should be a tiny synopsis of your novel.] before the veil fails and all are damned for eternity.

TITLE OF MANUSCRIPT [Better to writer your title in caps] is an #ownvoices young adult fantasy, complete at 93,000 words. It features diverse and neurodivergent characters and can be pitched as [Instead of this, I would move the comps to the beginning of the third paragraph. Also, don’t forget to put in a tiny bio of yourself in the third paragraph] Black Katniss Everdeen meets Hajime Isayama’s Attack on Titan, with series potential [From experience I can tell you that this scares a lot of people off, and makes them think you have loose ends in your book. Keep this for later talks with agents, etc.]

I appreciate your time and consideration.

“My father used to read me the story of Eleison’s creation before bed. In the innocence of my childhood, it was my favorite lullaby. That innocence was lost, and in its place—a fractured memory of what once was.”

I spent so much of my childhood wanting to be like my daddy [Maybe “Dad”?] His aim was perfect. He held his bow high and shot slow [It should be “slowly”, and you can’t shoot an arrow slowly, because when you let go, it should be swift. Considering the next part of the sentence, “He held his bow high and precise” sounds better, since it gets rid of an adverb too], as if every arrow mattered. Conversation came easy for him. [The jump from his skillful archery to his social abilities is a bit jarring. Maybe add a transition sentence?] He knew exactly what to say to dispel any doubt, [when two parts of a sentence are about different things, use a comma, also “doubt” about what? Vague.] and could make you smile without lifting a finger [It’s not a good place to use “without lifting a finger”. Reads awkwardly. “Effortlessly” does just fine.] All Eleison loved him, once. [I would move this a few sentences back, maybe even use it as the transition sentence I talked about] Mikael Kardal. Named for the first Hero of Light, his name now hung over me like a curse. As the days grew closer to the anniversary of his death, all I wanted to do was erase him from existence [If he’s dead, he’s basically erased from existence. Maybe erase reminders or memories of him?]—myself along with him.

Only a few more days.

The thought became [“had become”] my mantra. Seven days, five hours, and unknown minutes left. The day will [if you put “will”, the sentence should be italic to indicate current thought. If not, “would” is correct.] come and go as it had in the past [It’s a good opportunity to indicate how long it’s been since the dad died], but as always, with no reprieve [You can’t exactly cancel or postpone a death anniversary, so I don’t understand the goal of this sentence. I would get rid of “but as always, with no reprieve” altogether] No way to forget [would omit] the day he broke the darkest seal and opened the Gate of Temeluchus. Forever burned in my memory. [This is “telling”.] [Would end the sentence here for effect] as [if you do the last suggestion, this gets deleted of course] the day the inferna escaped their prison to walk the earth, [Would be a full stop if the suggestions are followed] it was a nightmare I couldn’t wake up from [I would delete. It’s telling instead of showing, and takes away from the other sentences instead of making the writing stronger] For that, time was cruel. [I would omit this too. Feels out of place.] Though, it was moments like this one, alone in Asher Wood, where I could let myself believe as if the last eight years [had] never happened. [It get better here, because it’s better to let us see the character and the situation, instead of telling us things for a whole page.]

High above the forest floor, my feet dangled [Is she sitting while shooting an arrow?] as deer moved through the trees below, unaware of a predator in their midst [Also telling. The last sentence showed us the deer are unaware]. The air smelled heavenly of pinesap and wild strawberries, my fingers stained red with their juices [How about tell us the taste it’s left in the mouth? Did she just pick them, or did she eat them? It’d be a nice sensory detail.] I drifted in and out of sleep [being sleepy is something we need to see much sooner], and wanted nothing more than to continue soaking up the sunlight that [most of the times, “that” is an unnecessary word] seepeding through the canopy, warming my bronze-colored cheeks [Reads a bit awkward. Consider rewording.] Still, I found myself [be wary of using this sentence where it’s not necessary and takes away from your prose] one kill short of what I needed for Momma’s stew.

[I love the feelings of the opening, but there are a few things I think you should remember. Think about your sentences when you’re revising/editing. Think about their meaning, and if they can be shorter and cleaner. Also, remember when you’re writing a scene, paint us a picture first and then add feelings and thoughts to it. This means you should think about the order of things you want us to know. We should know she’s sleepy, that she’s just had berries, and she’s looking to shoot a deer, before we hear about her father and how much people loved him.]

Thank you, Aty, for the critique! We are showcasing three mentor critiques each day leading up to the Pitch Wars 2020 submission window, so make sure to read the other two critiques for today and come back tomorrow for more.