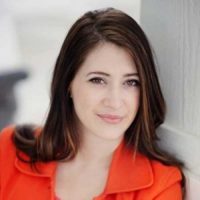 RuthAnne Snow was a sorority girl in college and social activities director in law school―which was a lot like being back in the sorority. She loves traveling, watching horror movies, and baking. She lives in Baton Rouge, Louisiana with her husband, son, and dog. WHEN THE TRUTH UNRAVELS is her first novel. 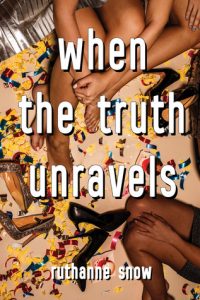 She knows she’s lucky that her parents found her in time. Lucky to be going to prom with her three best friends, like any other teen. Like it never happened. And if she has anything to say about it, no one but her best friends will ever know it did.

Jenna, Rosie, and Ket will do anything to keep Elin’s secret—and to make sure it never happens again. That’s why they’re determined to make prom night feel just like it would have if this past spring hadn’t been as eventful. This could be the night that convinces Elin that life can go back to what it was.

Except, at prom, Elin goes missing.

Now it’s up to her friends to find her. But each of the girls has her own demons to face. Ket is being blackmailed by an ex. Rosie is falling in love for the first time. And Jenna . . .

And no one, not even her best friends, knows why.

Heart-wrenching and utterly impossible to put down, When the Truth Unravels follows four friends as they confront their greatest hopes and darkest secrets during one life-changing night.

Seventeen-year-old Guina wants success for her family’s struggling horse and carriage travel business. So she’s elated when a wealthy young man turns up and books all the carriages for a tour. Soon she hears a rumour in town that he may be royal, but living in such a poor hamlet, there’s hardly a chance it could be true. [So this makes me think that the rumor is going to be a big element in your book, but then it sounds like she finds out Eldon is a royal fairly quickly. I’d think about retooling this opener so it’s a little punchier, and delete anything that might mislead the reader into thinking you’re offering something different than you are.]

That is until the morning of the tour, two golden carriages turn up on her doorstep, housing the King and Queen, and two other royal families. [A little confusing, could you say “the extended royal family, including the King and Queen.”?] Guina cannot believe her eyes, the young man is the Princess’s son, Eldon, Duke of Glensloe. [Consider a different punctuation choice after “eyes” to emphasize the second part of your sentence. Also, even though you’ve used titles, consider cutting down on the named individuals in the query for simplicity. What if it’s “Guina cannot believe her eyes—the young man who booked her services is the King’s grandson, Eldon Duke of Glensloe” and then later cut the “princess” in the next paragraph and say “she.”]

While this is wonderful news for the struggling business, as she gets to know the young Duke on tour, Guina realizes she has developed feelings for him. She knows being with Eldon is what she wants, but once his mother finds out about the pair, the Princess will do all in her power to keep them apart, including destroying her family’s travel business. [This is a good establishment of stakes, but it feels flat to me. We’ve read the, “poor girl in love with a noble, risking her livelihood” before, so now I want to know what sets your book apart. You want an agent to finish reading this query dying to get to the pages. I think rewriting the query with the goal of making Guina’s personality shine a little more, giving us a little more information about why she likes Eldon, and/or giving us the details or twists that tell us why your book is different and new. Right now your query feels a bit like the beginning of a synopsis where you’re just telling us the plot points but you’re not hooking us.]

[BOOK NAME] is a YA Historical Romance. Complete at just over 71,000 words, it’s a stand-alone with series potential, set in the Middle Ages, in the fictional country of Bethia. [This is me recalling just enough European history to be dangerous, but was a commercial enterprise like a recreational touring company common in the Middle Ages? Should this really be the Renaissance or later? Or if it’s a fictional country anyway, why not just leave off the detail about the Middle Ages?] My manuscript may appeal to readers of Tokyo Ever After by Emiko Jean, American Royals by Katharine McGee, and The Selection series by Kiera Cass. [These comps don’t feel right. Tokyo Ever After and American Royals are both contemporary, The Selection is futuristic/speculative with a lot of contemporary elements. None of them are historical and they’re all high concept. Your comps don’t need to be perfect matches, but they should let the agent know that you know your genre and reader expectations. You can say something like, “My manuscript will appeal to readers who loved the star-crossed romantic elements of Tokyo Ever After, the political scheming in The Selection, and the alternate history twists of American Royals” so it better explains why you’ve chosen these particular comp titles, but ask yourself if an agent who is a big fan of these books is going to be disappointed if your manuscript is actually quite different. To me, your query and first page reads like this manuscript is more quiet/serious, yet these comps suggest it is going to have a lighter, funnier, or more commercial tone. Having not read your full manuscript, I don’t know which impression is right, but try to make expectations match in your query.]

A bound book of parchment swung at my side. Inside was a list of all the best sights the woods held and how to get to them. Except, I knew where I was going. Father and I had been traveling these woods since I was young. [So why is she bringing the book?]

As I skipped through the woods its beauty filled my senses. Birds fluttered from branch to branch, a gush of air whistled through the leaves, and alongside me was a small trickle of water from the stream I followed. It was only a drizzle, but nonetheless, it was a sign the small waterfall it should lead me to was flowing again.

After this year’s healthy winter rain, a waterfall so close to our hamlet could be the answer to save our touring business. We could offer cheaper day trips to entice more guests. Certainly, that would be enough to get customers to book a tour. So Father had sent me to check it out.

A rustle nearby pulled me from my thoughts, making my ears twitch. My eyes darted back through the trees. They searched the woodland, yet nothing unusual lingered in sight. I breathed a sigh of relief to try and calm my racing heart. I was being silly, the woods were generally safe, especially in the day. The sound was far more likely to be Father than anything else. He was supposed to be checking a different attraction but maybe he was following me instead, testing my ability to travel alone in the woods. [This is a very readable sample and I’m curious to find out why she thinks her father might be spying on her. Just be cognizant that even if you’re writing something that’s on the quieter side, you still need to find a way to hook a reading agent.]

Thank you, RuthAnne, for the critique! We are showcasing three mentor critiques each day leading up to the Pitch Wars 2021 submission window, so make sure to read the other two critiques for today and come back tomorrow for more.