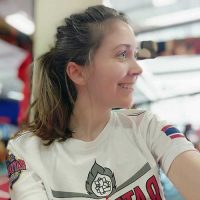 Meg Long was born and raised in Louisiana and originally wanted to be a spy. Instead she somehow found herself teaching overseas in China and Malaysia before ending up in Colorado, where it snows entirely too much. She taught middle and high school for eight years before jumping to the tech industry as a content writer. Her debut novel, COLD THE NIGHT, FAST THE WOLVES, will be released in 2022 from Wednesday Books. When not reading or writing, she’s kicking things at her Muay Thai gym with her boyfriend, playing video games, or obsessing over Sailor Moon fanart. 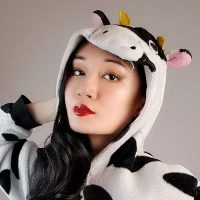 Xiran Jay Zhao is a meme-loving shitposter who is somehow becoming a published author. They are a first generation immigrant to Canada from small town China (which, for China, means a town of 4 million people). A recent graduate from Vancouver’s Simon Fraser University, they wrote sci-fi and fantasy books while they probably should’ve been studying more biochemical pathways.

COLD THE NIGHT, FAST THE WOLVES

Coming in 2022 from Wednesday Books.

Seventeen-year-old Sena Korhosen has been scraping by alone on her frozen, backwater planet for the last five years. After falling in debt to a local gangster, her dreams of getting off-world become next to impossible. Especially when he demands that she heal his prize fighting wolf, Iska, or he’ll force her to join the great race across their planet. To Sena, the infamous sled race isn’t a path to riches like most believe — it’s a death sentence that claimed her mothers’ lives. Sena swore she’d never race, even if mining the rare exocarbon at the race’s end could buy her a ticket to any world she wanted.

When Sena tries to escape her fate, she ends up double crossing the gangster instead. She’s left with no choice but to flee with Iska in tow. A team of scientists offer to pay her way off-world on one condition — she gets them to the finish line of the race. But the tundra is a treacherous place and Sena’s going to need every skill her mothers taught her if she expects to survive. Especially if it means learning to trust a feral wolf.

But as the race unfolds and their lives are threatened at every turn, Sena starts to question her own abilities. She’ll have to discover whether she’s strong enough to survive the wild — whether she and Iska together are strong enough to get them all out alive.

Iron Widow is a YA Pacific Rim meets The Handmaid’s Tale retelling of the rise of Wu Zetian, the only female emperor in Chinese history. The duology will follow an 18-year-old re-imagining of her as she avenges her sister’s murder by an intensely patriarchal military system that pairs boys and girls up to pilot giant magical mecha based on creatures from East Asian myth (Nine-Tailed Fox, Moon Tabbit, etc.), but in which boy pilots are treated like celebrities, while girl pilots must serve as their concubines.

(Eli’s full name) touched the face of the divine when she was eleven years old. [How old is she now? YA queries tend to need an exact age.] Her resulting magic is a secret she keeps as closely guarded as the branching lightning scars branding her body. [But what exactly can she do with her magic?] After the divine tore magic from the world millennia ago, it is a blessing only bestowed upon the leaders of the Church…or stolen by brazen sinners. And even though Eli has spent years burying her emotions in a desperate attempt to avoid any more bloody catastrophes [Like what?], she knows she’s no saint. [This paragraph should be tightened up/shortened.]

When Eli is forced to compete [How and by whom? What are the stakes for her?] for a place as one of the priestess’s closest knights—the Regents of War, Plague, Death, and Famine—she enters a world that would rather see her dead than standing by the priestess’s side [Is this something specifically against her or is it just a very tense competition?]. If she wins, she’ll spend her life serving a faith she abhors. And if her magic is discovered, she risks the death sentence that comes with heresy. [So she can’t use her magic in the competition? How are they competing?]

But when she gets there, the competition is the least of her worries. People go missing only to be discovered dead and dismembered days later. A papery voice speaking in an unknown language whispers through her dreams. A holy cemetery hosts rooms that should have perished in ancient wars. As Eli struggles to connect the rising body count to the secrets buried in the Church’s history, her answers may lie within the one person who threatens her most. [Why does she get in on the investigation? This paragraph is full of great detail but a query should focus more on the conflict and stakes that Eli is facing, rather than world building or imagery. We need to know why the deaths matter to Eli and what the connection/relationship is between her and Kovadere. Is he hunting her for her magic? Also, what does she stand to gain or lose if she investigates?] Korvadere, the Regent of Famine and witch-hunter of the Church.

In an ancient monastery haunted by long-dead ghosts with everyone vying for a place in history, there’s an enemy behind every corner. And the most dangerous one of all doesn’t need to wield a knife. [Love this sentence, but would also love more details – is the most dangerous person one with magic? or something worse? Also, the knife reference seems specific but it’s the first time any sort of weapons are mentioned so I’m not sure if that’s an important element or not.] As the final challenge approaches and death closes in, Eli has to decide whether to bury what she’s learned or risk her life to expose it. [Would be really helpful to know what exactly they need to do in these challenges because right now there’s no hint to it] What’s more important: for her to be safe, or for her to be seen?

TITLE OF NOVEL (80,000) is a young adult gothic fantasy with series potential that blends the atmosphere of Gideon the Ninth with a reimagining of the four horsemen of the apocalypse.

I currently work as an assistant editor to the publications director at a non-profit. As a queer and nonbinary author, I’m passionate about writing the messy, complicated, and flawed LGBTQ characters that I needed to see growing up.

[This was a great draft for a query letter and with a little tweaking can be even stronger! Remember to focus on conflict and stakes rather than world building, that’s what your opening pages are for.]

When magic left and the Divine ran
And the Horsemen didn’t show
She named four to sit at her left hand
And now everybody knows:

Plague keeps her healthy
While War guards her crown,
Death kills her enemies
And Famine hunts the magic down.

[Loved this as a worldbuilding piece!]

I am least afraid [‘not afraid’ would sound less awkward?] when the knives are passing over my skin. They kiss my thighs, the hollow of my throat, the flutter of my pulse. I’ve been bitten by them before, but never here. [The setup of the knives is really good but the wording makes it seem like she is about to get ‘bitten’ by them on stage. Tweak a little so it sounds less like a comparison is about to happen.] A stage is a holy place, and I am a golden idol. There is a sea of faces in front of me, but I don’t see them. I see the silver twist of metal a moment before it falls past me, and I turn on my toes to the beat of the music [Could add that tweak here to show she escapes the knives easily]. My legs ache as I dance, and I have to blink to keep the beads of sweat out of my eyes. The beat of drums drowns out the rest of the sounds in the room, and I can pretend that they’re all held captive.

But it’s fleeting. The drums end. The music stops. I remember myself, and like always, I want nothing more than to get off the stage and retreat into invisibility.

A half-hearted cheering spreads through the room as I leave the stage. As I turn to give a final flourish to the crowd, I notice someone watching me. Which shouldn’t be uncomfortable because…of course someone is watching me. Everyone is watching me. If no one was watching me, I would probably be summarily banned from performing at the parlor. And my ego would take a substantial hit. [This paragraph could be tightened up.]

But the way this one man is watching me makes the hair on my arms raise. The flickering lamplight of the Nightingale Parlor hides his features in shadow, but I can make out a brand underneath his left eye. He meets my eye and smiles. It doesn’t feel predatory, and that makes me tenser. This is a parlor; in a sea of men looking at me like they want to hunt me down, someone watching me with no want in his eyes stands out.

It’s the same way I feel when the constable of the city comes on a raid, or the way the air thickens right before a barfight. An anxious anticipation that rouses the serpentine magic inside me.

I pull the glittering scarves wrapping my body closer and duck out past the heavy curtains that separate the parlor-front from the rest of the building. Ilia doesn’t pay me to act sweet to her clients. As long as I rouse them with thrilling and dangerous theatrics, I’ve done my job. Let the rest of them deal with whatever shit he’s [is this ‘he’ Ilia or the man in the crowd?] going to pull.

The heavy door leading to our sitting room is so covered in fabrics and scarves that it makes no sound when I open it. A few girls relax in the room, freshening up before being called by Ilia.

I turn to see Xia sitting cross-legged and contorted on one of the window ledges, her loose silk skirt tied low on her waist.

“If you keep betting on that, you pretzel woman, you can just let Ilia know to add your pay right to mine,” I retort.

[This first page is really strong! There’s world building (that opening rhyme is killer) and a good intro to the main character. We’re definitely interested in Eli’s history with knives and why she likes to perform but still also wants to be invisible. Super interesting internal conflict set up!]

Thank you, Meg and Xiran, for the critique! We are showcasing three mentor critiques each day leading up to the Pitch Wars 2020 submission window, so make sure to read the other two critiques for today and come back tomorrow for more.