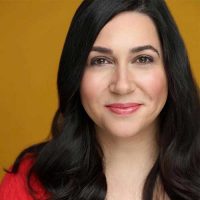 Jennifer L. Brown writes middle grade novels about awesome kids having adventures. When not writing in coffee shops around NYC, you might catch her performing in plays or flirting with bankruptcy at a local bookstore. She has strong opinions about the oxford comma, musical theatre, and RuPaul’s Drag Race. Jennifer is a proud member of the Pitch Wars mentee class of 2017, and her writing is represented by Alyssa Jennette at Stonesong Literary.

Title Redacted is a 60,000 word Middle Grades [delete the s from grades] novel set in 1920’s Hollywood that beckons a crossover between The Invention of Hugo Cabret with The Adventures of Tom Sawyer. [A comp title published in the last five years might be beneficial here, instead of a classic like Tom Sawyer. I would try to find a book with a bit of magic in it since it seems Odin’s story has fantasy elements].

There is a fine line between fantasy and reality. Dancing on that fine line is an eleven-year-old boy called Odin Thatch. Odin has an imagination that can bring things to life, but it has also landed him the world record for hours spent in detention. [Are the detentions necessary to mention? It makes me think this is going to be a school story, which it isn’t]. Imagination runs in his family though, as his father is an aspiring moving picture director who moved to Hollywood from Chicago shortly after the death of Odin’s mother in the 1918 influenza pandemic. [This is such a unique setting! I love it! However, I would slim down the details in this sentence, too. Do we need to know he moved from Chicago? In the manuscript, yes! In the query, no! I also would rewrite this sentence so Odin is the focus, not dad, so we can get a little more insight into Odin’s loneliness/emotional state] Odin knows precious little about his mother’s past and has only fading memories of an amazing woman who seemed to be the secret ingredient to his family’s happiness [Looking later in the query, it seems like his dad is actively hiding details from Odin and there is a mystery here. That information might be good to have in this paragraph if a. Odin has a sense of it at the top and b. unraveling the mystery will be the main focus in the novel]. There are two places Odin can escape the tension at home [until this moment I didn’t know it was tense at home]: moving pictures and his own imagination, which he hopes will culminate in the fulfillment of his dream to star as an actor in a real picture.  [I am a little confused about Odin’s main agenda. Is it to be a movie star or to discover the truth about his mom? Does one goal lead into the other? Are either of his parents connected to his dream of being a movie star? If one of these goals is primary, I’d shine a bigger light on it in this paragraph]

Interrupting an important lunch meeting between his overworked, distant father and actors Charlie Chaplin and Douglas Fairbanks, Odin initiates a legendary horserace [two words] down Hollywood Boulevard and sets in motion a chain of events that will help him realize his dream and discover his family’s hidden past. [You don’t need to tell us the end of the novel here! You want agents to keep reading! It might be better to use the second half of this first sentence to connect to the events in the following sentence. How does the horse race lead him to The Gold Rush set?]. Partnering with best friend Aislinn O’Brien, Odin joins the set of Charlie Chaplin’s next picture, The Gold Rush, where he meets an actress from Chicago who reveals truths about Odin’s mother and the Thatch family that his father has hidden from him for his entire life. [In this paragraph, it would be excellent to introduce what obstacle or obstacles are keeping Odin from achieving his dream(s). Perhaps there is a villain or something standing in his way?]

As Odin and his dad both learn about the cutthroat world of the Hollywood moving picture industry from vicious and greedy distributors, they both feel their dreams shift as they rediscover a wife and mother who could have had everything Hollywood has to offer, but who understood that true magic only happens when you find happiness within yourself and with those you love. [What’s missing here for me are the stakes/consequences if Odin cannot achieve his dream(s). What choice and/or sacrifice does he have to make to achieve them? Also, the detail about his imagination is such a fun one, but I’m wondering how it relates to the events in these final two paragraphs. It might be nice to weave that thread of imagination throughout. Does his power of imagination help or hinder him on his journey?]

I have a Master of Arts in English with an emphasis in Children’s Literature from the University of State at City, where I was able to write about Peter Pan and Tom Sawyer and tried to sound really intelligent. In reality, I just love stories for kids and Disneyland because I believe in the power of imagination. [This sentence, while a lovely sentiment, isn’t strictly necessary for a query. I would cut it]. I currently live in the San Fransisco Bay Area. [I’m sure your spell check will catch this, but Francisco.]

Middle Grades: Historical Fiction [If there is a fantasy element, I would include that in this description! Also, no s in middle grade]

Everything was ordinary, except for the boy who was about the steal from the most famous man in Hollywood. Yes, except for that. [A fun hook!]

The blazing California sun, the dazzling California city, and the beautiful California people were all doing what they did best: shine. And that was all completely normal. [I think you can delete this last sentence because you already have the idea that everything is ordinary].

The palm trees were swaying in unison as the breeze coasted lazily down Hollywood Boulevard. The men were holding briefcases, not so much walking down the street as galavanting, chests out, nodding to the women they passed with a tip of their bowlers. The women giving only slight smiles and raising their eyebrows in return. [This is technically a fragment. Perhaps change to gave and raised?]. Automobiles whizzed and honked their way down the street, whisking important passengers to important meetings for important companies. The hum of noise was constant. Newspaper boys shouting the latest news (“US Army Planes safe and sound after round-the-world trip! Read all about it!”), horses trotting and huffing, the latest Hollywood gossip being tossed as casually as a baseball back and forth. [I love the little hints that we are in for a historical story in this paragraph. Horses, bowlers, that headline! I might even add a detail or two more to suggest a time period, especially because bowlers might not be in a typical middle grade reader’s vernacular].

Everything was bright, loud, fast. And perfectly normal. Except, of course, for that one extraordinary boy. [This also feels a tad repetitive].

And he was now dipping, bobbing, and weaving between cars, horses, and humans alike. Cab drivers stopped in the middle of the road to stare, the newspaper boys stopped shouting and pointed while laughing, even the horses disobeyed their riders and paused to catch a glimpse. This wasn’t normal. It wasn’t that it was a boy.  [In this series of sentences, I was a little confused about what ‘it’ was at first. I also don’t know if you need to spend so much time defining what is normal and what isn’t. I am anxious to meet our MC at this point!] It wasn’t that this boy was traipsing around in a grown up’s hustle and bustle world. It wasn’t even that this boy was out and about in the middle of the day on a Wednesday afternoon when he should have been in school. It was that this boy had painted his face blue, put on a ten-gallon cowboy hat, and had transformed the tip of a broom handle into a dull-pointed spear. [This is such a fun image! I am a little confused how it relates to the initial hook of stealing from the most famous man in Hollywood. Is he playing a different game now? I would make sure to connect these thoughts]. He had three very scared-looking dogs in his sights and was hunting with as much stealth as could become an 11-year-old boy with too much color and too much energy. [Oh no! He’s hunting dogs? Even if he is playing pretend, hunting dogs does not endear me to him as a reader. Especially because I might not know he’s in a flight of imagination at this stage of reading. Also, can no one else see what he is imagining? That fact might be important to mention in your query! I assumed “come to life” meant come to life for everyone, not just Odin.]

[Thank you for sharing this with me! You’ve got a great start here. A very intriguing premise. I love the setting of 1920’s Hollywood and the incorporation of actual Hollywood figures into the story. For the query, the aim should be to keep everything under 300 words and around three paragraphs, so condense where you can! The important stuff: who is Odin, what does he want, what’s preventing him from getting what he wants, and what is at stake if he does not achieve his goals! Best of luck!]

Thank you, Jennifer, for the critique! We are showcasing three mentor critiques each day leading up to the Pitch Wars 2020 submission window, so make sure to read the other two critiques for today and come back tomorrow for more.