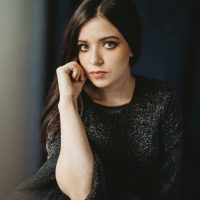 Skyla Arndt has always loved the creepy, crawly side of life. When she was younger, she thought that love might translate to hunting Bigfoot, but luckily for him, writing proved easier.

Skyla has a BA in Marketing and lives with her husband and two cats near the frozen Great Lakes. 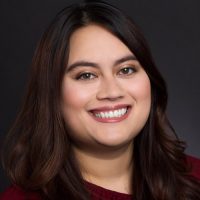 Alex Brown is a Showrunner’s Assistant by day and a YA Horror Comedy (and, occasionally, Rom Com) writer by night. She’s no stranger to horror, as she’s worked on Supernatural and Netflix’s upcoming Resident Evil live-action adaptation. She lives in LA and spends her free time singing showtunes to her cat, who isn’t terribly thrilled about it. Alex is the co-creator of The Bridge, a narrative fiction podcast that’s had over 1,000,000 downloads to date! She was previously a mentor for two rounds of Author Mentor Match and is so stoked to be a Pitch Wars co-mentor for the first time!

TOGETHER WE ROT by Skyla Arndt 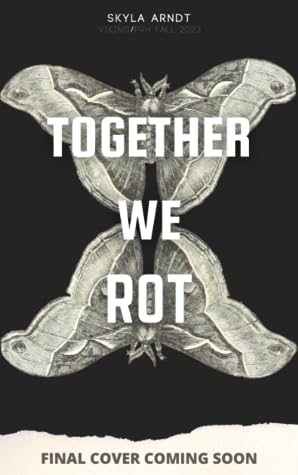 “Hereditary” meets WINTERWOOD about two former best friends — tough-as-nails Wil and shy, sheltered Elwood — who must confront an ancient evil living in the forest before it’s too late.

Alex will have a short story published in Tori Bovalino’s THE GATHERING DARK: AN ANTHOLOGY OF FOLK HORROR, which is coming out in Fall 2022!

Vidya Savas rises from a coffin in the desert. She was never dead. [Punchy one or two line openings for a query can definitely be effective (and fun!), but we’re a little confused here. There isn’t a lot of context. What is the importance of her rising from a coffin? Is this a surprise to her?]

At sixteen, she is notorious across Mahabad for two things: her genius knack for procuring magical objects and her choice to transform herself into a monster. [Is this something only she can do in her society? You mention “choice”, so is there a reason for it?]

The conquering warlord who brought her to the desert [How does this relate to her waking in a coffin? Did this warlord capture her or make a bargain?] charges her with finding the Tablet of Destinies, the source of all magic [I assume he wants it for nefarious reasons, but what? Does he not have magic? Try to contextualize this so the reader knows the stakes and the established norm of Vidya’s society]. No one refuses him, and if she succeeds, she will have gold beyond her wildest dreams. [Why does she need this gold? Gold is great, but what are the true stakes for her? Does she have a sick family that she needs to provide for? Is she greedy and wants more money to use for her own monstrous purposes?]

Vidya embarks on an impossible journey [Why is it impossible? What challenges await her?] that forces her to join hands with a no-nonsense warrior, a sly harem girl, a hard-mouthed cage fighter and a cunning pirate, all of whom want the gold as badly as she does [Why is she joining forces if they’re all competing against each other? The last paragraph made it sound like the warlord was bringing Vidya only. Is he recruiting more people?]

But with each step closer to the Tablet, a sinister, veiled figure [*poisons everyone] poisons her everyone she met [So is the conquering warlord not the main baddie? This is a bit confusing] . Their actions suggest that a powerful hand within Mahabad is responsible. [What actions and how?]

All Vidya wants is to get paid and save her skin, but now even that seems impossible. [Why can’t she stop?] To succeed, she must find out who is so desperate to keep the Tablet hidden and why, before she returns to the coffin – permanently. [We never really established what the coffin part means.]

X is complete at 92,000 words. This is an #ownvoices BIPOC Young Adult high fantasy novel based on Indian mythology.

Fans of the diverse, brutal world and the tense adventure in An Ember in the Ashes by Sabaa Tahir, as well as the fierce, female protagonist of The Wrath and the Dawn by Renee Ahdieh will enjoy this book. [Good! You can probably merge this with the above paragraph]

I have a Masters in Creative Writing and English Literature, [*and I] have taught both [cut “both”] to kids of my target audience at local high schools. I am a midnight baker and maker of bizarre origami creatures. [These are super fun!]

Your story sounds super cool and I’m so glad you shared this with us! Queries are super tricky (especially so for YA Fantasy), and we want to make sure that we’re highlighting your cool world and Vidya, who seems like an awesome heroine!

With that said, here’s a query structure that we use that’s been helpful:

Greeting/Personalization/Details about the book that will help the agent understand where it would generally fit in the market.

In your first query paragraph, highlight the protagonist. Tell us about who they are/what makes them unique. But also give us a hint of where they’re a little dissatisfied with life. Which leads us into some mention of the inciting incident, where everything changes for them.

In the second paragraph, we get the fallout from the inciting incident and also widen out the world for a little more worldbuilding. Since this is a YA Fantasy, this is a great way to showcase the cool world you’ve created and really highlight what makes your story unique! We should also get a hint of your Main Character’s stakes here. What are they fighting for? Who are they fighting against?

In the third paragraph, if there’s some kind of romance, it would be great to mention here as well. Especially if there’s some tension between the MC and their Love Interest. And then drive everything home by focusing on the global stakes. What will happen if your MC fails to achieve their goal? Will the world end? Will the monsters overtake the city? What would entice someone to want to keep reading and root for your MC?

Close it out with your bio, which is lovely!

So, with all of that, here’s how I would rework your query:

Since you said you wanted X (some element of your book), I hope you’ll be interested in X, an #ownvoices YA Fantasy based on Indian folklore. It is complete at 92,000 words and will appeal to fans of the diverse, brutal world and the tense adventure in An Ember in the Ashes by Sabaa Tahir, as well as the fierce, female protagonist of The Wrath and the Dawn by Renee Ahdieh.

Sixteen-year-old Vidya Savas is a monster. Literally. As a [worldbuilding word for what her power is], Vidya has the ability to transform into a fearsome [whatever the monster is–be specific]. But that’s not what she’s most known for. As Mahabad’s best procurer of magical objects, her skills are in high demand. Which is fine with her. She’s content with taking job after job to make a living–until [warlord’s name], the warlord who conquered Mahabad, shows up at her door.

He tasks with an impossible mission: finding the Tablet of Destinies. The source of all magic. Only one problem with that: the tablet’s location has been lost to time. And, even if she happened to find it, legend has it that it’s guarded by [some monster/obstacle–I just made something up here, but it would be nice to have some idea of what makes finding the tablet so impossible]. Vidya knows it’s a fool’s errand and wants no part of it–until [warlord] gives her an offer she can’t refuse: enough gold to buy herself a new life [or a way out of Mahabad, etc].

Determined to get out of Mahabad, Vidya accepts his offer. While searching for the tablet, she  crosses paths with a no-nonsense warrior, a sly harem girl, a hard-mouthed cage fighter and a cunning pirate, all of whom want the gold as badly as she does. [are they competing for the gold or to get the tablet?] But when Vidya–and her competitors–are all poisoned by a sinister, veiled figure that’s been following them, they’ll have to form an uneasy alliance to discover who wants to keep the tablet hidden–and why. If they can’t, [put the global stakes here–I’m still a little unclear as to what they are from the original query]

[Feel free to take or leave anything and everything! We definitely threw in some things to help the example flow, and we hope they were helpful examples. You’ve got such a cool idea here and we’re really intrigued by the coffin thing and would like to know more about that and how it works into the bigger stakes of the story!]

The word pestered Vidya like the mosquitoes bumping her cheeks. [Love this comparison!] She didn’t flinch till the insects hit the last gold coin around her neck. More than an unusual fashion choice, the gold saved her from a fate worse than death. And listening to a heart-devouring Goddess’s complaints for eternity seemed merciless in comparison. [This is a bit confusing right off the back.]

Which will happen, unless you focus.

The Valley of the Fallen, once a holy site, was a glorified bazaar, with few stalls and fewer patrons. Vidya turned back to her client, this prime example of human[love that this implies that she’s not entirely human]– corrupt, exploitative, sent to the outskirts to die an oblivious death. In short, boring. [Love her voice!]

Vidya snorted: she made the demands. After all, he kowtowed to the desert warlords and was useful in one way – he was desperate. Even now, his eyes flickered to the distant desert, expecting it to rise up and swallow him. But fear was Vidya’s only friend here. [Great descriptors!]

Vidya said, “You won’t find mood-changing incense anywhere. A hundred, and you’re lucky.” Vidya was overpricing, but today, she was desperate too.

“You’ll be lucky,” he spat, “To avoid a stoning.” Vidya froze. Maybe he wasn’t as stupid as she thought.

“They say things about you. Terrible things. Things I’m sure you’d like to keep hidden.”  Despite the heat, Vidya shivered. True, they whispered as she passed: She’s a Lilit, a monster of the wasteland. She committed a grave crime. And Vidya enjoyed her notoriety, until now.

[This is a pretty solid opening! Vidya’s got a great voice. Our biggest recommendation would be to throw in some more setting descriptors so we can truly immerse ourselves. Also as much as we love that opening paragraph, it doesn’t seem to tie in to the rest of the page later on.]

Thank you, Skyla and Alex, for the critique! We are showcasing three mentor critiques each day leading up to the Pitch Wars 2021 submission window, so make sure to read the other two critiques for today and come back tomorrow for more.