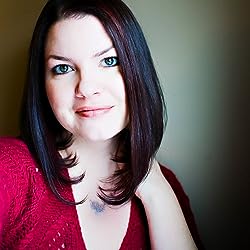 Brighton Walsh spent nearly a decade as a professional photographer before deciding to take her storytelling in a different direction and reconnect with her first love: writing. When she’s not pounding away at the keyboard, she’s probably either reading or shopping—maybe even both at once. She lives in the Midwest with her husband and two children, and, yes, she considers forty degrees to be hoodie weather. Her home is the setting for frequent dance parties, Lego battles, and more laughter than she thought possible.

When Evan looked up, it wasn’t his worn out face looking back at him; it was a scrawny ten-year-old. (I’m not sure where we are in the MS, but generally mirror scenes are frowned upon, especially in the beginning. Can you fit this information into the story in some other way?) His lip and nose were bleeding (Is this actually Evan or his mirror-image? Clarify). The blood turned pink as it mixed with water and swirled down the drain. Paralyzed, he watched as his younger self lifted his face into the steaming torrent of water. (This is very confusing. Can he see his past self in the mirror? I really have no idea what’s going on…) He could almost feel those cuts burning under the water as he touched his own lip. (Is his lip bleeding/cut? If not, specify here.) Young Evan started to cry silently, then he let sound leak out [protected by the blare of water.] (I get what you’re trying to say here, but the wording is a bit clunky. I also think you could do a lot with voice here with word choices—did he wail so loud not even the pounding of the shower could contain it?) He crumpled to the ground in a ball, lightly banging his head against the shower wall in frustration. (Who is this? Ten-year-old Evan or the Evan whose head we’re inside of? As it’s written, it’s ten-year-old Evan crumpling to the ground… Since I’m not sure where this is in the story, it’s hard to give direction, but this is incredibly confusing and doesn’t make sense as it stands now.)

When will he leave me alone? Evan cried in his head. (This is redundant since you’ve shown his thoughts in first person and italic.) He just wanted to be left alone. No more screaming and fighting and hurting.  (I think we could really use more of Evan’s thoughts—why is he feeling this way? Is he scared? Nervous? Does he think he’s gone crazy?)

The boiler made another cannon fire sound before the water turned cold, the jarring temperature throwing Evan from the memory. turning the water cold. It threw Evan from the memory. The water warmed again, but his peace was gone. He grabbed the soap and washed up. (How did he get from washing up to cradling dirty clothes? Readers don’t need a step-by-step guide, but they do need to see how the characters get from one thing to another.)

Cradling his dirty clothes in one hand and clutching the towel around his waist in the other, Evan headed downstairs to change. He forced his thoughts onto the list of things still waiting to be done: sell the furniture, sell the house, close out Paul’s credit cards, deal with insurance. (Waiting to be done because why? Was there a death? Was Evan close to him/her? Is he inconvenienced by it? We haven’t gotten a glimpse of his emotions other than the brief mention of wanting to be left alone.)

His suitcase sat beside a table, propped open with his clothes folded inside. Evan walked over to it and dropped the dirty clothes in the lid while fishing around for something easy to wear. He pulled out a maroon henley and some black skinny jeans and threw them onto the mattress. (I’d summarize this entire paragraph in a single sentence. Spend more time showing the readers how your character feels/thinks instead of details like what he’s wearing.)

As Evan turned around, he looked through the windows and saw a man peering into his living room, staring directly at him. He gripped the towel tighter and [fumbled between] (not quite the right word choice. He debated between?) reaching for his clothes and heading for the door to tell the guy off. It left Evan standing awkwardly in place, half naked, while he and the man looked at each other. (How does Evan feel? Is his heart beating faster? Did he startle when he caught the man staring? Did he expect this to happen? And why doesn’t he have curtains or blinds up? Is he in a new house? We’ve yet to really get more than a cursory glimpse into his emotions or thoughts, so it’s hard to read voice in here.)

He’d never seen this guy before, but there was something wrong with him. His The man’s eyes were so dark they looked black, and his face was sunken in like one of those photos of survivors of POW camps. The flesh at the bottom of his face hung loose on the protruding bones like it was a mask he’d haphazardly thrown on. He grinned at Evan, taking a moment to adjust his red tie without ever breaking eye contact. (This whole paragraph is creepy…why didn’t Evan think so?)

Evan didn’t know what to do. (Evan was frozen in place, fear paralyzing him. –see the difference?) He was vulnerable like this (how so?) and whoever this man was he wasn’t concerned with being caught. (How does Evan know that?)

Then he backed away from the window. (This is a bit anti-climatic. See if you can find a different way to reword that makes it a bit punchier.) Evan rushed over and peered through the screen. The front yard was empty, aside from the remains of a flower garden. There was nowhere for the guy to hide.

Confused, he grabbed his clothes off the mattress and threw them on. He rushed out the door looking for footprints in the grass. It was a futile attempt, but there had to be some indication of where he’d gone. (Why was he frozen before and now he’s ready to go after him? What changed? Take the readers along that journey.)

Since the start of this seems to be somewhere other than the first page of the book, it’s a bit hard to critique since I’m not sure what the readers already know and what they still need to find out. I do think your voice gets lost in inconsequential details rather than pulling the readers in with a deep POV like you’d want to in third person. When writing each scene, try to portray how the character is thinking and feeling. It’s important to illustrate that on the page so the readers know. A well-done third person doesn’t read like third person, but instead just allows the readers to get lost in the story.

Thank you, Brighton, for your critique. Interested in more 500 word voice workshops? Come back Monday for two more critiques. And get ready! The Pitch Wars Mentor Wishlist Blog Hop starts July 20 with the Pitch Wars submission window opening on August 3.

Tessa Ever After: A Reluctant Hearts Novel

Many more books by Brighton on her Amazon Author Page.