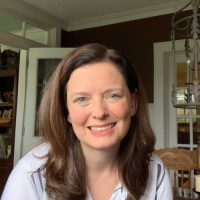 Laurie Dennison writes young adult fiction with romance, twists, and complicated families, usually set in Florida. A former English teacher, she currently works as an editor, consultant, and web designer with authors and nonprofit organizations. Laurie loves traveling, alternative music, and stories that keep her reading past her bedtime. After a few years on the west coast in California, she returned to north Florida, where she lives with her family and their many pets.

And ever since Cynthia Marlow learned her boyfriend was cheating on her, punk rock has been dead. [I like the use of the shorter sentences and white space here.]

That’s what she gets for dating the bass player in her band. Her former band. After discovering her boyfriend was cheating and nailing him for it, they kicked her out. [I’m wondering what this means exactly–if he was the one cheating, why did they kick her out? At this point I know that he plays bass, but what is Cynthia’s role in the band? Singer? Guitar player? With her as the main character, I want to know more about her here.]

As if losing her boyfriend and her music wasn’t bad enough, the high school gossip girl posted a YouTube video detailing the darkest secrets of six seniors. [After the intro in the beginning of the query, this feels like a big shift to me–and maybe more what the conflict of the story might actually be about. Based on those first lines, I’d assumed this was a story about her getting her band/music back. Now it feels like something else to me.]

Number four on the list? Cynthia. Her secret? Only the worst moment of her life. She’s been trying to forget that night for over a year. Now all the trauma has resurfaced, and she does some digging to find out what really happened. Turns out, her former bandmate [Which bandmate? The ex or someone else?] made a deal with his drug dealer. All debts forgiven for one hour with her. Consent optional. [Yes, this definitely feels more like a dark/suspense type manuscript now.]

Cynthia’s a fighter at heart though, and now she’s on a mission to destroy his life. [Whose life? The bandmate? The drug dealer? The person who posted the video?]

Brayden’s life couldn’t get better – captain of the basketball team, one of the most popular boys in school, all thanks to his perfect, social queen girlfriend. [Dual narrators can be difficult to work into queries, but this is a nice, quick introduction to Brayden. I wonder if that sentence before could transition into this a little? For instance, Cynthia’s on a mission to destroy the gossip girl, and she’s not the only one… or something like that.]

That is, until a YouTube gossip channel reveals he’s still a virgin. Thank goodness that’s not the real secret he’s been keeping from everyone.

When Brayden and Cynthia land in Saturday detention together, they start to [The words “start to” could be cut here to tighten up the sentence.] hatch a plan to take back what was stolen from them when that video aired, along with the help of the other four “victims.” The more they work together, the more they realize that the gossip girl got it all wrong. Their real secrets are much deeper and darker. [Here I’m wondering what the stakes are, for both Cynthia and Brayden. What is their plan, exactly? To take down the person who posted the video? What will happen if they succeed? What will happen if they fail?]

[I think queries work well when they feel threaded and follow this general pattern: Who is this story about? What do they want? What’s standing in their way? What happens if they succeed or fail?

At this point, I feel like I want to know more about who Cynthia is and what she wants at the start of the story. In the opening now it feels like this is a story focusing on punk rock, while the rest reads more like it’s about her plan to either get revenge or somehow reverse the effects of the video being released. I assume that the gossip video becomes what stands in her way of her initial goal, but that clarity would help to tighten things up for me.

I feel like I know a little more about who Brayden is, but I want to know what he wants and why the video is standing in his way too. So, if the video is what’s keeping them from getting what they want, what specifically is their plan, what do they both want to get back, and what are the consequences that follow from their plan? Those specific details can often be what makes a query stand out.]

TITLE is a YA Contemporary manuscript complete at 80,000 words inspired by the Green Day album Revolution Radio. Featuring broken social barriers similar to The Breakfast Club, this story will take readers on a John Green-esque emotional roller coaster.

When I run, the world disappears. I see [The words “I see” can sometimes be a filter phrase, and they could be cut here while adding an active verb like “stretches” after pavement.] the pavement in front of me and hear the even thud, thud, thud of my shoes pounding the road, and nothing else. My iPhone is strapped to my arm—its only purpose to alert me to the number of calories I’m shedding during my hours on the road.

Calories in. Calories out. The simple arithmetic makes sense to me, gives me purpose. Defines me.

I am surrounded by silence. [This sentence could be more active by making silence the subject–ie, Silence surrounds me.] I need it. It takes away the pain. When I top that third hill from my house, the steepest one, I pause to check my pulse. My heart hammers in my chest. Now that I’ve stopped, the Brayden inside my head starts criticizing. That Brayden is filled with resentment and anxiety. [<- I feel like this sentence could be cut–we see this in the sentences that follow.] It reminds me that I used to be different, ugly, unlovable. That I used to have no friends, no hope of a girlfriend. That everything I have now, beautiful Angie, my place on the basketball team, the school’s adoration could all disappear. It tells me to keep running. To never stop. It conjures up visions of potato chips, brownies, ice cream, everything I used to love, and it labels them as trash and filth. Something I’ll never let myself touch again.

My girlfriend, Angela, says I’m a deep thinker because I’m so quiet. Really, I just don’t know what to say. I can’t tell her about the never-ending criticism that runs through my mind and keeps me awake at night doing hundreds of sit-ups when I should be sleeping. [The sentence variety and paragraph breaks work well in the opening here. While I like that we get a glimpse inside Brayden’s head, I would like more action in the scene and maybe even a particular scene-level goal for him introduced. Maybe the calorie goal he’s hoping to burn? Sometimes I think it works to hold back some inner monologue and sprinkle it throughout the scene, intermixed with action, to keep up the pace and to keep the reader wanting to know and understand more. For instance, if Brayden wants to hit a particular goal, maybe the iPhone buzzes, alerting him that he’s met the goal, and he stops at the top of the hill to check. He’s reached it, but…maybe then we just learn that stopping makes him remember “That everything I have now, beautiful Angie, my place on the basketball team, the school’s adoration could all disappear.” And then he could keep running, without the other thoughts at that point, so that the reader might wonder why and want to keep reading to find out.

Thank you so much for sharing your query and first page with me (and everyone in the PW community!)  I hope these suggestions have been helpful!]

Thank you, Laurie, for the critique! We are showcasing three mentor critiques each day leading up to the Pitch Wars 2021 submission window, so make sure to read the other two critiques for today and come back tomorrow for more.