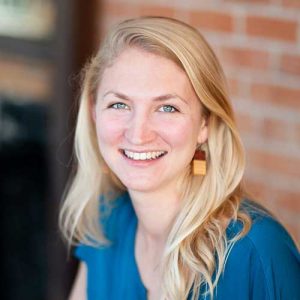 Emily Golden is obsessed with the power of story. For the last decade she’s helped activists, business owners, election candidates, and writers find and hone their voices so they resound with those they need to reach.

As a Book Coach and Developmental Editor with Golden May Editing, she helps writers see the potential in their stories, as well as the path to attaining it. Her favorite stories to work on include complex characters with grey motivations and worlds vivid enough to lose herself in. In 2018-19 she worked as an Editorial Intern at P.S. Literary Agency.

Originally, from the coast of Maine, Golden is now posted in the mountains of Colorado. She’s happiest outside and most weekends you’ll find her camping in the back of her Tacoma—probably writing her epic fantasy, or with a book in hand.

Given your interest in [contemporary romance + something personal/specific], I hope you might consider my debut novel, TITLE. [Switch ‘might’ to ‘will’! Sounds a bit confident.] Complete at 83,000 words, it is The Bookish Life of Nina Hill meets Almost Famous [Put the comp titles in all caps!] and will appeal to readers of Taylor Jenkins Reid and Mhairi McFarlane. [Ab it of personal preference, but I would put this whole paragraph at the end before the closing.]

Sarah McPhee, the [remove ‘the’] daughter of a one-hit-wonder from the eighties, is a staff editor living in Boson, [Do you mean Boston?] compiling “Top 10” lists for a glossy lifestyle magazine instead of writing album reviews for Rolling Stone. [I think you’re implying that she wishes she was working for Rolling Stone instead. If so, be more explicit. Include an adjective about the lifestyle magazine that reveals exactly how she feels about it, and then name her specific alternative desire for her life.] Having maintained the same routine, relationship, and hairstyle for years, Sarah is tired of being the human embodiment of background noise. After she’s dumped by her longtime boyfriend, she is forced to acknowledge that change is actually the only way to survive, and uproots her life to go work for a beloved music magazine in the U.K. [Did he dump her because he saw her as dull? I would reorder this paragraph to make clear that the breakup is what led her to believe that she’d become ‘background noise’. You should also give more insight into what Sarah wants and fears by moving to the UK so we can understand what journey you’re setting her up for, what she might need to learn to be happy.] Though she finds kinship in a staff of misfits, the publication, like Sarah, needs a drastic overhaul to prevent abject failure. [I love this! The parallel between character arc and plot is great.]

Rob Evans is the lead singer of a London-based cover band, content with working a dead-end job and singing the hits of other musicians. Rob isn’t looking for inspiration, [Why, specifically, doesn’t Rob want fame or inspiration? What’s keeping him from seeking it? Give a hint into his fears or motivations.] but when Sarah shows up at the bar where he’s performing, it’s hard to look away. [Why Sarah? Why now? And how does she lead to inspiration? Does that mean he starts writing music?] Convinced she’s only drawn to Rob’s sound – she has no interest in getting her heart broken a second time – Sarah allows Rob to show her life’s more fun when you take chances.

By launching a podcast to help save the magazine, getting on stage to perform her mom’s single, and learning to play the guitar, Sarah attempts to live her life to a soundtrack of greatest hits. But, when the attraction between herself and Rob threatens other relationships and the magazine continues to decline, Sarah must face the fact that moving to London may be her biggest flop yet. [Love all of this! Gives a sense of the stakes. It’ll hit home more if you give details above on Sarah and Robs desires/fears.]

The upbeat melody of the Jonas Brothers drums through my earbuds as I sit on the ripped green vinyl cushion of the subway chair, mouthing the lyrics. My adjacent commuters don’t seem as jazzed by the morning slog, [Hah! Love this voice.] focusing their attention instead on the Boston landscape crawling by outside the laminated glass. [The way this is worded you indicate Sarah is jazzed. What about?] It’s the same view I’ve passed for the six years my boyfriend, Ben, and I have lived in our dumpy apartment. His parents claim to have purchased the unit as an investment, but it was really an incentive for him to go to a local law school instead of applying to one in New York City. Ben promised we’d look for a new place once he gets hired at a firm, but a part of me thinks I’ll be making this trek forever. [How does she feel about the prospect of making the commute forever? Is this a relieving reality or a scary one?]

At Sassy Magazine, I’ve been an editor for the entertainment and beauty sections since college. Due to my groundbreaking research, readers are apprised of vital information, such as “20 Can’t-Miss Office Memes,” “7 Best Post-Workout Smoothies,” and “4 Ways to Spot a Toxic Friendship.” Whenever you see “contributing staff writers,” or “by Sassy editors,” that’s me, Sarah Lydia McPhee. Writing listicles isn’t precisely what I had in mind at this stage of my career, but there’s no reason to fix what isn’t broken. [This paragraph is a bit of exposition. In this moment on the commuter train she’s probably not thinking about this, so you as the author have taken us out of the in-scene action. I’d hold these details until she’s in the office, where you can show the articles on her desk, and reveal how she feels about them by using her in-moment emotions and thoughts.]

The subway pulls up to the Hynes Convention Center platform. It’s a few stops before mine, but since it’s a nice enough day, I hop off and walk the rest of the way.

[You’ve got really clean writing! I can already tell I will like Sarah’s voice. In these opening paragraphs aim to establish what Sarah most desires and fears. The best way to do that is to open with her on a kind of mission. Have her head into work, a meeting, or some specific interaction with a specific goal that’s tied to either maintaining or uprooting her predictable life. As written, I’m not clear on why she’s so happy, or what she wants in this scene. If you indicate and specify her motivations, readers will be care about her faster and keep turning pages to see if she gets what she wants.]

Thank you, Emily, for the critique! We are showcasing three mentor critiques each day leading up to the Pitch Wars 2020 submission window, so make sure to read the other two critiques for today and come back tomorrow for more.