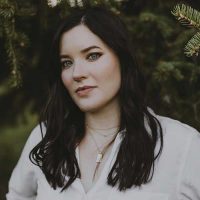 Sasha Smith grew up in the mountains of Utah surrounded by siblings, books, and one very old cat. An author of young adult fantasy novels, she’s represented by Hillary Jacobson at ICM Partners. Sasha currently resides in Washington DC with her partner and a windowsill of dying succulents.

Sixteen-year-old Jess Powers starts a [monster-themed] [there’s something about the word “monster” that connotes middle-grade lit to me. I love your phrasing “cryptids, ghost-hunting, and all things that go bump in the night” that you use later in the query. It’s very evocative. I would consider using it here, early in the query, to describe her channel and set the tone] YouTube channel when she moves to a new town and new school. [I’d break this into two sentences, there’s a lot of info crammed into your opening sentence] after her mom is left bankrupt and facing eviction because of a divorce. With college dreams evaporating along with her father’s presence in her life [-love this!,] monsters are Jess’s escape from real life…until one late night drive when the monster she sees in the middle of the road is terrifyingly, undoubtedly real. [So jess believes the monsters she reports on are fake and is shocked to see a real one? Or does she think they’re real and she’s trying to prove it? Make the premise of the channel a little clearer.]

Reeling from her experience, a plan unfolds in her mind: post the video she’s taken of the monster on her YouTube channel and ask her followers for help. [Help doing what?]

As her ad revenue spikes, so do the reported sightings and strange occurrences in town [what occurrences? This query is on the shorter side so I do think you have the space to add a sentence or two of more specific, hook-y details about exactly what kind of havoc the monster is wreaking]. Jess is on the scene as much as possible[,] which rouses suspicions of an elaborate hoax. When the similarities to the legend of Mothman start stacking up, Jess teams up with an annoying ghost-hunter who might be more trouble than help [love!]. In the face of disbelief from her mother and her peers, she must prove that the monster is real and that it poses a threat to her family, her town, and the future she wants for herself before it can lay waste to her new home.

Complete at 70,000 words, TITLE is a YA horror novel for teens who love BUZZFEED UNSOLVED [I’m very into Buzzfeed Unsolved as a comp, but I’d also add a book to ground it. Perhaps THERE’S SOMEONE INSIDE YOUR HOUSE by Stephanie Perkins?] and dream of investigating their own mysterious hauntings and cryptid sightings.

I am currently working as an Archivist and live in Central Illinois after growing up in Fort Worth, Texas. I am a life-long fan of cryptids, ghost-hunting, and all things that go bump in the night. My website is _____.

Jess Powers angled her computer towards the school building, holding it higher in hopes of catching the lost Wi-Fi signal she’d had only seconds ago.

“C’mon, like ten more minutes,” she pleaded with the air as she watched the signal icon remain stubbornly empty. She lowered her computer and tried connecting to the Wi-Fi a few more times before she sank back down on the hoodie she’d been using as a cushion against the hot asphalt of parking lot that bordered the far corner of the administration building [you’ve already established she’s next to a school building so you don’t need to state it again]. Usually she could get access to the school’s Wi-Fi until at least six on Fridays and it was barely five thirty so whoever was in charge of turning it on and off must have cut out early [does school wifi work this way? It’s entirely possible I have a lack of wifi knowledge, but I don’t think schools have people turning the wifi on and off?].

“Motherfucker,”[I don’t mind swearing personally, but it might be a liiiiittle too edgy for the opening. Is there another word or phrase she could use that would still help the reader get a sense of her character?] she swore.

She had been so close to uploading her last homework assignment due Monday so she could dedicate the rest of the night to the half-dozen articles that she needed to read before she filmed the final cut of her latest video for her YouTube channel. Now she would have to go to one of the cafes downtown and buy a drink with her always sparse bank account just so she could sit and wait for the crappy Blackboard interface to upload her homework [why not the library? I like that you’re trying to establish a sense of desperation and urgency, but the library seems like too obvious a solution to all her problems. Maybe their wifi sucks, or she has an inconvenient crush on a shelver, or she can’t get a card because she lost her driver’s license. Just give us a reason! You could use it to help establish who she is].

It’s why Jess worked [I’ve never heard the phrasing “work ahead” before. Maybe thought ahead? Planned? ] ahead. Usually.

The shiny[,] and tech-heavy Seneca High School in her new hometown in the middle of nowhere Illinois took everything way more seriously than Van Buren where Jess had done her first two years of high school back in Texas, which meant that Jess had about three times more homework on top of the ugly uniform of khakis and a polo she was now forced to wear daily [this is a pretty big run-on sentence. I’d recommend splitting all of this information it into at least 2, probably 3 sentences]. Junior year had hit her like an all-consuming wave after a long summer of doing nothing but building her [avoid, if possible, using the same word twice in a sentence, perhaps replace “her follower count” with “the follower count” to avoid a triple-use of the word “her”]follower count for her channel where she talked about movie monsters and other monster lore. [is this really all she was doing this summer? It seems like it’s been pretty eventful with the move and her parents splitting up!]

It’s not that she missed the Austin suburbs[,] or Van Buren High School much — she’d never had any real friends there either, but at least there she could slide by with doing the bare minimum. At SHS, Jess felt like she [missing word?] under a microscope.

She closed her laptop, issued to her on registration day after her mom had to put down a deposit that had made Jess sick to her stomach, and put it into her backpack before leaning her head back against the brick wall she’d been sitting against [another long sentence. I’d trim it down something like this: Jess closed her laptop, issued to her the day her mom put down a tuition deposit so big it made her stomach sick, and leaned her head against the brick.] . In [At?] Van Buren, before her dad had basically vaporized himself from their lives, she would have never had to do this weird skulking around the school after hours act just to steal Wi-Fi, but here it was another bill [if her mom could afford tuition, why can’t she afford wifi?]that there was no way her mom could afford without child support on her meager salary as a cashier at the local hardware store Jess’s grandad owned [another very long sentence with quite a bit of plot jammed in! don’t be afraid to break these up, try to make sure, especially during this opening, that you’re not trying to fit all of your exposition in between commas, in paragraphs made up of a single sentence].

[You opened the last paragraph with the word “she” I’d see if you could try open each paragraph on the page with a different word, just to ensure your sentences are varied.]She checked the time on her phone and hefted her backpack up to walk across the small parking lot out behind the high school that was almost completely empty aside from a few cars clustered near the athletic complex and her beaten-up red Honda Civic that was almost as old as Jess herself. [This is another paragraph made up of a single sentence with quite a bit of detail. Break it up or trim it down. One of my favorite tricks for making sure my sentences aren’t running on too long is reading everything aloud to myself, or even recording it and listening to it back. It will give you a better sense of flow and help you identify sentences like this. If you can’t read it in a single breath, it’s probably too long! I love the detail of the car that’s almost as old as she is!]

This was such a joy to read, I’m already loving Jess, and her headstrong nature!  Thank for you trusting me with your words! Best of luck!

Thank you, Sasha, for the critique! We are showcasing three mentor critiques each day leading up to the Pitch Wars 2020 submission window, so make sure to read the other two critiques for today and come back tomorrow for more.